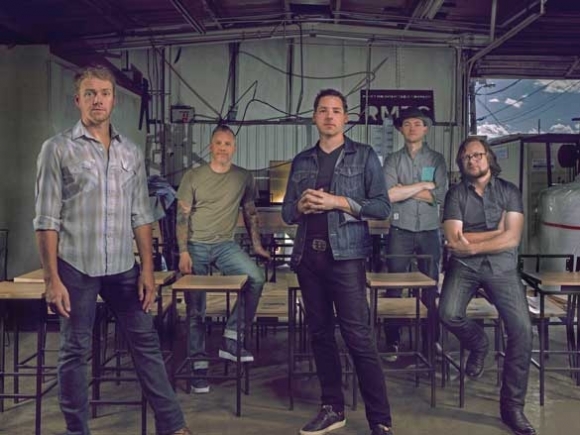 They are the bridge.

In the bluegrass world these days, it seems there are two camps of thought and performance — neo-traditional and progressive. On one side, you have the “old school” of Larry Sparks, Doyle Lawson and those who truly adhere to the likes of Bill Monroe and Flatt & Scruggs. On the other, are those who stretch out a little bit, where the lines between bluegrass, Americana and soul are blurred, acts likes The Steep Canyon Rangers, Greensky Bluegrass and Yonder Mountain String Band.

And then there’s the bridge — The Infamous Stringdusters. A modern style new-grass ensemble, but with their feet firmly planted in traditional pickin’ and grinnin’ circles, the quintet is one of the few acts truly embraced by jam and Americana circles, and also recognized by the International Bluegrass Music Association.

With their latest album, “Laws of Gravity” (out Jan. 13 on Compass Records), the Stringdusters push further ahead in their pursuit of bluegrass perfection. For them, it’s about learning the unknown depths of the tricky and sacred language that is bluegrass. And in an often-crowded market of dime-a-dozen groups aiming to follow in the footsteps of the legends that came before them, it’s also about finding your own unique voice and captivating identity — something the Stringdusters continue to prove each day, onstage and in the studio.

Smoky Mountain News: With the new album, there’s a sense of urgency and political intent with it. What did you think about Meryl Streep’s speech last night at the Golden Globes?

Andy Hall (dobro): [Laughs]. I did see it. I think it’s really cool and interesting that people who have a mouthpiece speak up. But, there are different opinions on that. Some people wonder why you should care about the opinion of an actor? And that’s legit, too. You certainly don’t have to. But, as musicians and artists, that’s kind of what we do. Bring attention to things. We have a mouthpiece. This is all choice here, personal choice in what people think and feel. It’s a take it or leave it kind of thing, and I think it’s great that people speak out. Good art can’t always be safe and quiet, and not ruffle any feathers. You’ve got to ruffle some feathers sometimes. It has to be a dialogue. We just want to have a conversation and bring light to things.

SMN: I thought, too, that the cover art for “Laws of Gravity” is pretty powerful.

AH: The song “Gravity” was a bit of the inspiration for that. You have this boat that’s about to go over a waterfall. You can see from the physics of the picture, it looks like the boat will keep going and fly straight. And for some people, they think the country is going over this precipice, but there is this bit of hope and we can sail off into the sunset.

SMN: In the bluegrass world, there are seemingly two sides — neo-traditional and progressive. What do you see with these two camps? Is there a divide? And are the Stringdusters the bridge?

AH: You can definitely see the divide. But, it can be more of just an observation. I feel like we have been able to ideally bridge that gap of the traditional and progressive worlds. To be honest, a lot of it comes down to how people like to experience music. Some people want to sit quietly, not be disturbed and take in the music in a more traditional way. Other people want to dance, socialize, see their friends and feed into the energy of the band and the crowd. It’s not a problem at all. It’s just what people prefer. I was young and found traditional bluegrass. I started out playing electric guitar in high school, was a metal head, fell in love with the Grateful Dead, and then next thing you know, I found bluegrass. Moved to Nashville. For us, what we’ve tried to do is spend the time and energy to become well versed in our instruments, and in that bluegrass tradition. There is a language to bluegrass and it takes years to learn. You kind of have to dive into it to really understand the in-and-out of how to do it. We wanted to learn the language and use those skills to make our own music.

SMN: And you have people like Peter Rowan and Sam Bush, who were considered outsiders back in the day, are now looked at as elder statesmen of bluegrass.

AH: Totally. They were absolutely the hippie outsiders. It’s great. It’s all an evolution. I’m sure one day the Stringdusters will be the old farts of bluegrass if we’re lucky enough. Personally, I’m able to float through those different worlds and be comfortable. As a band, we like a standing crowd feeding off of the energy of the performance, and we feed off of their energy. It isn’t a play, it’s an interaction, and that’s what we like to cultivate.

SMN: What is it about bluegrass that sets it apart from other genres?

AH: When you find bluegrass, it’s like discovering an entire ancient city. You stumble upon this whole culture and sound, and it may be completely new to you. The high harmonies and fast picking, the nuances, it just attracted me.

SMN: What has a life playing music taught you about what it means to be a human being?

AH: I think that circles back to having some kind of responsibility. When you’re a performer, you realize that people are looking at you and listening to what you have to say. If you have a lot of people looking at you, why not try to be a role model, be a good person and have something of value to say? There’s a lot of power in being a musician, and why not use that power for good?

Newgrass act The Infamous Stringdusters will be performing at 8 p.m. Friday, Jan. 13, at The Orange Peel in Asheville. Billy Strings opens the show. Tickets are $17 in advance, $20 day of show. www.theorangepeel.net.

For more information on The Infamous Stringdusters, and on their new record, “Laws of Gravity,” visit www.thestringdusters.com.