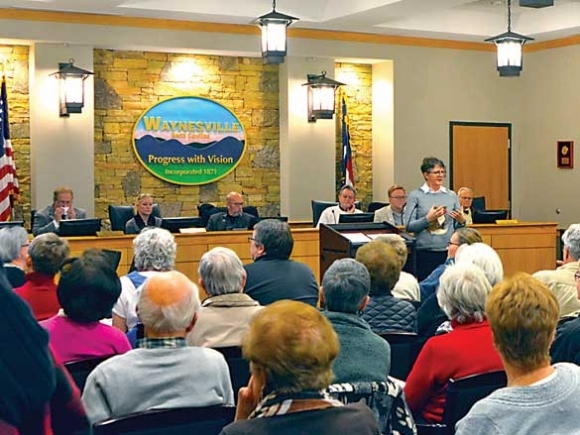 Although work on the North Carolina Department of Transportation’s proposed improvements to Russ Avenue won’t begin until 2022, Waynesville residents have already been persistent and vociferous in their opposition to the Walnut Street segment of the project.

For the second time in less than a month, Mayor Gavin Brown and Waynesville aldermen invited the public to speak out on the controversial $18 million plan, which as currently presented would widen a segment of Walnut from where it meets Russ Avenue to North Main Street, obliterating more than a dozen century-old trees along with brick retaining walls, stairways and much of the character that makes the short stretch of road one of the most unique in the region.

But for the first time, representatives of NCDOT and the engineering firm associated with the project, which is titled “Russ Avenue DOT Project U-5839,” were in attendance to hear from concerned citizens firsthand.

Whether or not NCDOT alters its plans, however, is another matter. The project is meant to address projected traffic growth on Russ Avenue through the year 2040, from the Great Smoky Mountain Expressway south to the railroad bridge at Walnut Street.

Instead of terminating there, however, it continues on to Walnut where it terminates at North Main Street, where traffic growth isn’t projected to grow substantially during that time period.

More than 70 people — some standing, some dragging chairs into the aisles — packed Waynesville’s town hall hoping to have their say Jan. 5.

And as with Dec. 13, not one person voiced support for the Walnut Street portion of the project.

Kristy Carter, a transportation engineer with Waynesville-based J.M. Teague Engineering and Planning, was brought in by the city as an impartial expert to help answer questions and ensure the meeting progressed smoothly.

Due to the substantial amount of people present, Carter attempted to avoid repetitious comments; the first to speak against the project was attorney Charles McDarris, who owns two properties on Walnut and has perhaps been the most ardent detractor of NCDOT’s proposal.

In methodical fashion, McDarris utterly dismantled any and all arguments that might support the Walnut Street widening, as he’s done before the board previously.

When asked, 90 percent of the room said they agreed with McDarris’ points; just two or three others added arguments McDarris hadn’t raised, but not one person spoke in support of the Walnut Street widening.

Burch — while saying he recognized arguments against the widening — countered by saying that Walnut Street wasn’t ADA compliant, and could face drainage issues from aging infrastructure in the future unless something was done soon.

Resurface it and make it ADA compliant, but do not expand the asphalt footprint, McDarris said as a muted cheer arose from the audience.

As with other local issues, the contention surrounding the Russ Avenue project centers around the oft-competing ideas of encouraging progress and preserving the culture and history of the town’s built environment — concepts, McDarris said, that don’t necessarily have to be mutually exclusive.

“I think if you approach progress from the aspect of knowing your history, understanding your history and remembering your history, it helps you progress in a more natural way and makes progress more defined,” McDarris said. “I have talked to well over 100 people and no one supports the widening of historic Walnut Street.”

According to the published agenda for the Town of Waynesville’s regular board meeting Jan. 10, aldermen were to consider a formal resolution to NCDOT expressing the sentiment of its citizens. It is expected that the town will oppose Russ Avenue DOT Project U-5839, or at the very least, the Walnut Street portion thereof. That action was slated to occur after The Smoky Mountain News’ press time on Tuesday; check www.smokymountainnews.com for the results of that meeting and more coverage of the issue.

Those who wish to comment on Russ Avenue DOT Project U-5839 have until the close of business on Jan. 13 to contact NCDOT; call 828.631.1146 or email Wanda Austin at This email address is being protected from spambots. You need JavaScript enabled to view it. before then. For more information on the project, visit www.ncdot.gov/projects/russave.