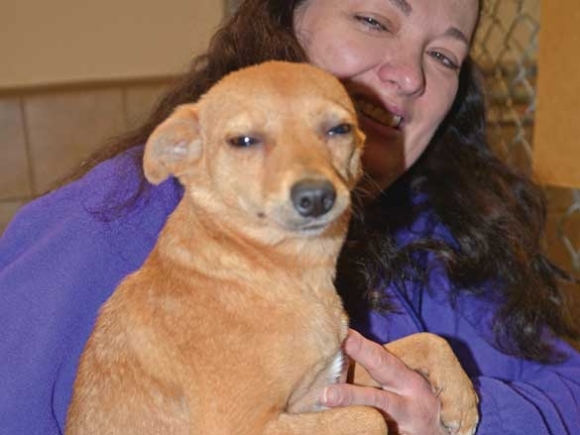 In a case that stunned Western North Carolina residents last November, 137 dogs were found being kept in varying states of neglect on a property outside the town of Canton.

Although none had to be euthanized and most of them have found permanent homes, some — including more than a dozen puppies — are still available for adoption.

While many were shipped out of state or sent to area animal welfare organizations, Sarge’s Animal Rescue still has a mother and several puppies, and Duke’s Animal Haven still has almost 20 dogs available for adoption.

“We ended up with 35 total, and 15 of those were puppies that were just a few days old, or newborns,” said Helen McLeod, president of Duke’s.

Duke’s ended up with the worst of them — the dogs requiring the greatest amount of medical care or socialization.

“We like the ones that tend to be special needs and need a little care, a little extra attention,” McLeod said. “We once had a dog from the Haywood shelter that took a year and a half to adopt, because she was a bait dog.”

McLeod said Duke’s is known for accepting such cases and working to nurse the dogs back to health.

“We spend a lot of time with them, playing with them, picking them up, kissing them, loving them, getting them used to people holding them, things like that,” she said. “And we have spent a lot of time on medical, like with Violet — she got baths twice a week for at least a month. And then she had medication on top of that for her skin issues.”

In the Canton situation, McLeod theorized that since the dogs were living in a single trailer or chained up outside on the property, they were not socialized and didn’t interact with strangers.

“People take their dogs out to PetSmart, or take them to the lake and walk,” she said. “They were not getting that. The older ones, we just spend a lot of time with them, be very patient with them, and we make sure that when people come to adopt them, that they understand that they’re going to be work – you’re not taking home a perfect pet. They need some adjustment time, some work.”

Some of the dogs, McLeod said, display a marked fear of men in particular.

“It could be abuse, it could be somebody just being stern with them,” she said. “They’ve not had a good social interaction with men. Strangers — and it tends to be men — they stand up so high, they’re over them, I think that bothers them. I’m not saying that these animals were abused, but they were definitely neglected.”

Haywood County Animal Services Director Doyle Teague said that the residents of the property, James, Angela and Kenny Croft, haven’t yet faced charges, but the county has been working with them to ensure they don’t relapse and begin hoarding again.

“I would expect there will be some citations,” he said, speculating that they could include hoarding, failure to vaccinate the animals, and animal cruelty.

The owners voluntarily surrendered the animals to Haywood County Animal Services, which sprung into action by renting a disused warehouse in Hazelwood for use as a temporary intake shelter, where dogs were cataloged, cleaned, fed and immunized.

“They’re still cooperating, and it’s not unreasonable to expect some leniency based on their ongoing cooperation. We’re just hoping to prevent a reoccurrence,” Teague said.

Duke’s Animal Haven will hold a special adoption event from 11 a.m. to 4 p.m. Saturday, Jan. 21, at the PetSmart in Waynesville. All remaining puppies from the Canton hoarding incident will be there, awaiting a permanent home.

Duke’s President Helen McLeod encourages those interested to apply to adopt at least a week before the event because the organization requires a reference from a veterinarian; absent that, Duke’s will do a home visit.

“All we look for is that it’s a safe place,” she said. “We don’t want to pull up and find another hoarding situation,” she said.

The adoption fee for the dogs— which are spayed or neutered and immunized — is $100; the puppies will also be micro-chipped.

Duke’s will also accept donations at the event, including blankets, bedding, food or money.