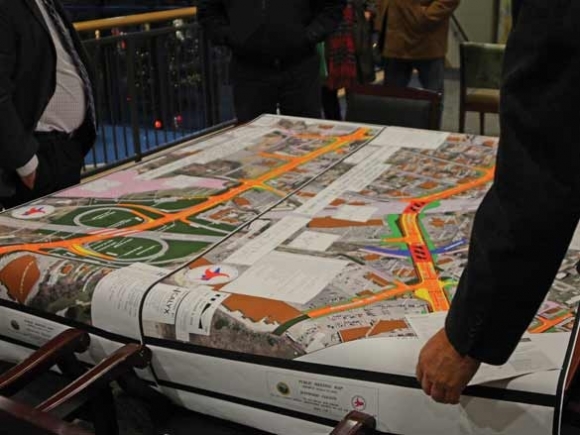 News of a historic portion of Walnut Street’s inclusion in the North Carolina Department of Transportation’s plan for the widening of Russ Avenue in Waynesville went over with property owners like a ton of the bricks in Charles McDarris’ 90-something year old retaining wall.

McDarris owns the properties at 28 and 52 Walnut Street, both of which feature extensive historic pedigrees, painstaking renovations and restrictive covenants designed to preserve the period character of the structures, which date to the early 1900s.

Like any reasonable property owner, McDarris wants to know how NCDOT’s proposal will affect him, but he says he can’t seem to get a straight answer.

Russ Avenue DOT Project U-5839 mostly addresses projected traffic growth on Russ Avenue through the year 2040 from the Great Smoky Mountain Expressway to the railroad bridge at Walnut Street. Instead of stopping there, however, the project terminates at North Main Street, where traffic growth is projected by DOT to grow little.

McDarris says NCDOT officials have told him that the improvements won’t increase the asphalt footprint along Walnut Street, but plans presented by NCDOT at a public meeting Dec. 6 show an approximately 17-foot widening that would obliterate McDarris’ wall, along with a number of century-old trees up and down the short stretch of street.

McDarris and others are likely to get their answer soon — or, perhaps not.

On Dec. 28 the Town of Waynesville took the unusual step of calling a stand-alone public meeting for Jan. 5 to gather citizen input on the Russ Avenue project.

Expected to appear are DOT representatives as well as those of the engineering firm involved with the project.

That could mean that McDarris will face one of three outcomes — the answer he wants, the answer he doesn’t want, or continued confusion over the project’s footprint.

The stand-alone public meeting comes after another unusual step by the town. About an hour’s worth of unofficial public comment took place before the board’s regular meeting Dec. 13 due to what Waynesville Mayor Gavin Brown said were complaints he and other aldermen had received about the project.

During that hour, the Walnut Street portion of the plan was universally derided by all who spoke, including property owners, Historic Preservation Commission members and a representative from the First Presbyterian Church located at the intersection of Walnut and North Main streets.

Mayor Brown said during the Dec. 13 meeting that he expected the town to take a formal position on the issue sometime soon, but it’s not clear if the town will do so on Jan. 5, or at the board’s regular meeting Jan. 10.

The public comment session for NCDOT ends Jan. 13, but a second public meeting hosted by NCDOT will be held sometime in mid-2017. No final project decisions have yet been made by NCDOT, and the project is tentatively slated to begin in 2022.

The following avenues are still available to those who wish to comment on Russ Avenue DOT Project U-5839. For more information on the project, visit www.ncdot.gov/projects/RussAve.

• Public comment will be accepted by NCDOT through Jan. 13; call 828.631.1146 or email Wanda Austin at This email address is being protected from spambots. You need JavaScript enabled to view it..