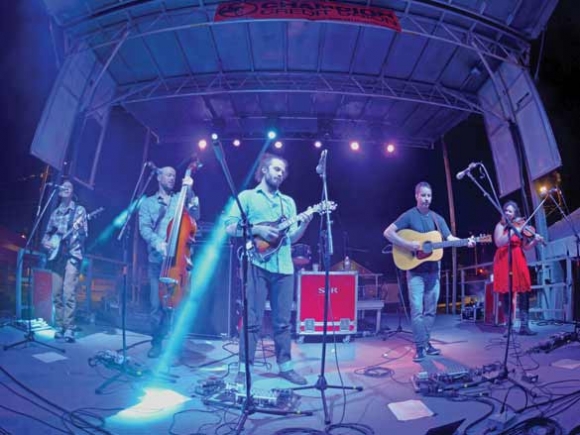 Each year, we here at The Smoky Mountain News showcase our “Spoof Awards.” Sometimes they’re meant in good tongue-and-cheek fun, but mostly they’re special events, people and places that we throw the spotlight onto one more time in reflection as another long and bountiful year comes to a close, a new year ready to begin.

For such a culturally rich area, Western North Carolina had another year of high watermarks when it comes to the preservation of sacred traditions and evolution of new art forms.

The More The Merrier Award

As if there wasn’t enough craft beer enthusiasm in Asheville and Western North Carolina, two new breweries (amid the dozens already) opened their doors in our backyard, ultimately adding more variety and economical opportunities.

Andrews added its second brewery with Hoppy Trout downtown. But, for Andrews, this is a sight to behold. For a mountain town that’s been eerily quiet for many years, bordering on abandoned, the downtown is now abuzz with folks strolling the sidewalks, cars parked up and down the street. A sense of “well, hey, check this out” crosses the minds of those who used to only stop in this part of Cherokee County to refuel as a halfway point to their final destinations, which seemingly could be in any direction.

Not to be outdone, Franklin also welcomed its second brewery this year — Currahee Brewing. With the beer flowing, the brewery is another big piece to an ever-growing puzzle that Franklin and Macon County have been putting together in this new and exciting era for the community and its residents.

“If nothing more, it’s fun — it’s a lifestyle business,” Currahee co-owner Brandon Hintz said. “If you’re not enjoying what you’re doing, then why are you doing it?”

“There is no end, no climax. This is just the beginning,” Currahee co-owner J.T. Schroeder added. “We drank from the fire hose, and we’re still drinking from the fire hose — time to go to work, time to make the beer.”

As Head of Special Collections at Western Carolina University, George Frizzell spent the last 34 years of his life gathering and documenting the history of Western North Carolina and greater Southern Appalachia. From letters to photographs, artifacts to personal items, he has overseen it all, with the collection now including tens of thousands of pieces of information — all invaluable to the history of this region, all bringing together the people, places and things unique to our majestic backyard that is the Great Smoky Mountains.

To know Frizzell, let alone to be in his presence, is to experience a person who is living and breathing Appalachian history. For someone who has never lived outside of Jackson County, he sure is respected and well known across the country and around the world for his work. Though both are notoriously elusive and in the midst of penning their latest works, acclaimed Southern Appalachian writers Charles Frazier (Cold Mountain) and Ron Rash (Serena), quite possibly two of the most important and beloved authors in the modern era, each jumped at the chance to say a few words about Frizzell, and how vital his help was in the research needed for their bestselling novels.

“[History] gives you a sense of place, and not just for people born here. There’s a lot of people that are so interested in our history, and many of them move here and want to know, ‘Where am I?’ and ‘What happened here?’” Frizzell said. “I’ve done programs where maybe half the audience was from elsewhere, but they were so engaged and interested in the history and development of this region. If you don’t have the resources to explain the history to them, then it can be very difficult to do so.”

At the end of June, Frizzell retired. His legacy will be forever remembered, as he spent countless years gathering the intricate and incredible stories of these mountains and its people. And yet, the most irreplaceable item in the entire collection is, well, Frizzell himself — a real, honest and genuine soul of endless curiosity and passion for the culture of Western North Carolina.

“I’ve been really fortunate to have a job where I got to use my degree in history and use my interests,” Frizzell said. “And get to interact with all these people, to help them and work with them — it was all worthwhile.”

The Tides Are Turning Award

After years of taking a backseat to other towns and events in Western North Carolina, Canton became a beacon of music and culture when it doubled down on its 110th annual Labor Day Festival.

Alongside perennial favorites like Balsam Range and Joe Lasher Jr., the festival brought popular national bluegrass act Yonder Mountain String Band to the stage. In an effort to attract folks from beyond Haywood County, the out-of-towner crowd at Yonder Mountain was as enormous as it was jubilant in their dancing and enjoyment of the spectacle.

Add in the ever-growing live music and culinary treat that is Southern Porch (formerly Sid’s On Main), the new Daily Bread Bakery down the street, and the recent news that BearWaters Brewing Company will be relocating from Waynesville to downtown Canton, and you have a mill town ready for the next step many have worked hard over the years to reach.

The Show Must Go On Award

After endless preparation and fundraising, the second stage of the Haywood Arts Regional Theatre came to fruition. Dubbed the Daniel & Belle Fangmeyer Theatre, the 9,000-square-foot second stage (with around a 140 person capacity) had been years in the making.

Breaking ground in 2014, the building had a $1.2 million price tag, with HART being able to raise the needed funds through the generous support of many longtime donors and supporters along with a few new ones.

“It’s the potential for a lot of concert events, theater events, community events, outdoor events with people sitting on the hillside, and the restaurant, which will make it possible for people to come and eat before a show,” said HART Executive Director Steven Lloyd. “This new stage will catapult our theater into one of the best production companies in the Southeast.”

In the decades since the original building opened, HART has proven itself not only an artistic hub of Western North Carolina, but also an economic driver for Waynesville and Haywood County. With a $2.5 million a year impact on the local economy, HART continues to grow, physically and financially, which is due in no small part to Lloyd’s day-in-day-out vigor to put his theatre on the national map.

“In this day and age, the arts are being chopped out of communities, out of classrooms, and out of the national dialogue, and yet there’s still this many people that want to support HART,” Lloyd said. “We’ve grown in a very steady way, never putting anything out there that was too outrageous to achieve. It’s been very slow, very consistent, and we’ve proven that we’re good for the economy of the community. We make money for everybody. We have a lot of tourists that come here and are drawn to the theatre. They spend the night here, eat here, and spend a lot more money here — we’ve been able to make the economic argument that the arts are good for business.”

The It’s About Time Award

After years of relentless touring and performing, Jackson County bluegrass act Mountain Faith hit it big in 2016. In September, they received “Emerging Artist of the Year” at the International Bluegrass Music Association awards in Raleigh.

It all started with Mountain Faith’s groundbreaking appearances in 2015 on the hit NBC show “America’s Got Talent,” where the group blew into the national spotlight by interpreting pop radio hits through old-time string music. With their truthful story of long weekends touring and even longer weekdays running their family tire shop on U.S. 441 between Dillsboro and Franklin, they made it deep into the televised competition, spreading the intricate talents and sheer awe of bluegrass music into millions of households each time they took the stage.

After their sendoff from AGT, they were nominated for “Emerging Artist of the Year” by the IBMAs in fall 2015, just around the time their song “Feelin’ Blue” hit No. 1 on the bluegrass charts. Though they didn’t win the “Emerging Artist of the Year” that year, lead singer Summer McMahan, however, took home the IBMA “Momentum Award – Vocalist,” which spotlights the finest up-and-coming bluegrass musicians.

Coming into 2016, the band continued to see its melodic star rise up a few lines on the festival posters, more and more songs hitting the radio, a Grand Ole Opry appearance, not to mention the tens of thousands of new followers they garnered through AGT that are now watching a journey all of us back home have been championing for years.

And when Mountain Faith sat in the audience on Sept. 29 for the IBMA award show in Raleigh, once again watching and listening to this year’s “Emerging Artist of the Year” nominees being announced, McMahan will be the first to say how surprised she and her band mates were when their names were called to the stage to receive the honor.

“We were so honored to even be nominated. To win an award like ‘Emerging Artist of the Year’ means that other people like the music we love playing as well,” she said. “There’s nothing like the feeling of knowing people support the music you’re playing — it’s so humbling that people even listen in the first place.”