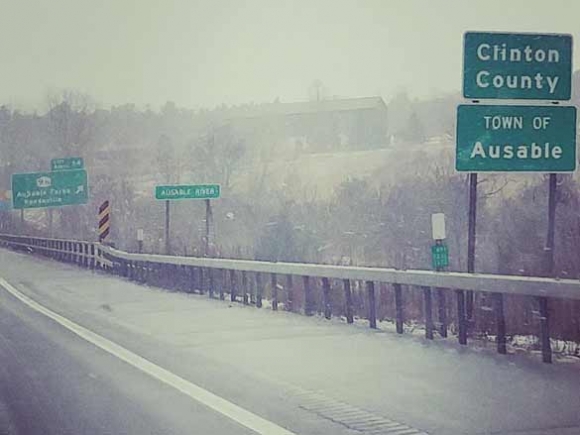 For me, it’s Plattsburgh, New York. Just down the road from the Canadian border, in the heart of the North Country on Lake Champlain. It’s been almost five years since I lived there, and several years before that when I initially left the rust belt blue-collar city in pursuit of my journalistic aspirations.

Seeing as I had plenty of unused vacation days this holiday season, I decided not to fly. Instead, I took my time and drove up there from Waynesville. I wanted to meander around and get some much-needed personal reflection that can only be found with hands on the wheel, eyes aimed ahead of the dashboard.

Alongside an old friend from my college days, we wandered along the Eastern Seaboard, making stops in Roanoke, Charlottesville, Washington, D.C., Baltimore, Camden and Albany. Once I let her off at her sister’s in Troy, New York, it was a straight shot north on Interstate 87 to Plattsburgh and Clinton County. Sunshine broke through the snowstorm clouds when my old pickup truck crossed into the Adirondack Mountains. By the time I hit the Clinton County line, a cold, familiar Arctic wind pushed against my vehicle.

They say “you can never go home again,” and the older I get, the more I realize the hard truth in those words. Sure, folks grow up and move on from youthful shenanigans and a lack of obligations, but I was, however, surprised just how quiet my old haunts were. Longtime and beloved bartenders had retired when I asked their baby-faced replacements just what happened to them. And as I was poured a beer by those replacements, a childhood friend solemnly explained to me why he would be spending Christmas Eve alone this year in his new apartment, and not with his significant others, and their kids.

I went for runs down nearby backwoods trails I had jogged down hundreds of times since I was in middle school. Played pool with my old man (who turns 75 in March) in the backroom of the local dive bar (our annual Christmas tradition). Met up with another face from the past, who was also in town for the holidays, and hearing him say, “Yeah, Pittsburgh is great and all, but I really feel like I’m not doing what I’m supposed to be doing with my life.”

And yet, none of these scenes or interactions surprised me. I’m an old soul, and I’ve been lucky enough to always see the big picture, and also how to properly navigate the choppy waters of that big picture. The troubling thing is watching my friends and family seem so caught off-guard by the actions and intents that led to where they stand today.

What I mean is, that though this past year seemed like such a doozie, it really is just another dot in an infinite line of dots connecting our past, present and future. Human actions are cylindrical, but time is linear. That said, what this time of year represents is a chance — a moment perhaps — when you can honestly look over your shoulder and make sense of the path behind you, and of what lines that path, whether it be flowers or piles of junk (or both).

The clouds hang heavy, and they hung low, about my hometown this holiday season. Probably as low and heavy as they do in your town, maybe even above your house. It’s been a long year — a longer lifetime — but for those with passion and determination, the clouds eventually move on, revealing the warmth of the sunshine above.

I, for one, look at this week as the bow tied on another trip around the sun — another chapter coming to a close. A clean slate will emerge come Jan. 1 with all those unknown adventures, people and situations ready to surprise you around every corner. I look forward to those surprises revealing themselves. And I also understand how they can either define or defeat you. Remember, positivity breeds positivity.

A few days ago, I was out running in downtown Plattsburgh. The city was silent, with very few cars on the road, minimal human traffic up and down the sidewalks. The only sounds heard being my breathing and the crunching of snow and ice underneath my shoes. And as I passed by a local food co-op, a few old friends emerged with grocery bags underneath their arms. They yelled out to me from across the road.

“Great,” I said, honestly. “I get to do what I love each and everyday, which is write, travel and meet people, interviewing them about their lives and what makes them happy.”

“What a crazy year, huh?” another mentioned.

“Yeah, but I hold out hope,” I replied. “I sincerely do. We’re all tired and we’re at a crossroads. I hold out hope that the good of humanity will prevail.”

3 The “Jazz It Up” on New Year’s Eve dinner and music special will be at 7 p.m. Saturday, Dec. 31, at The Classic Wineseller in Waynesville.

5 Legendary Nashville singer-songwriter and finger-picker Thom Bresh will perform as part of the “Songwriters in the Round” series at 6 p.m. Saturday, Dec. 31, at the Balsam Mountain Inn.