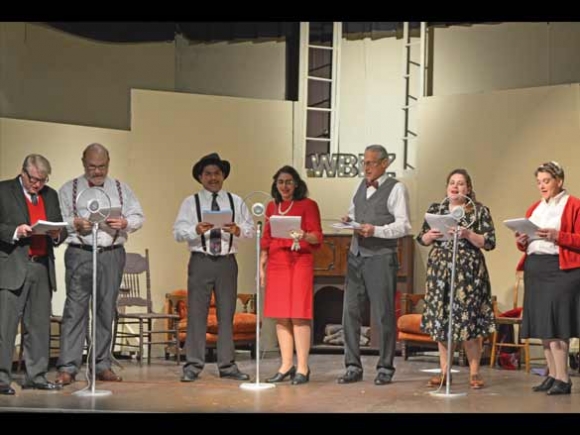 The overhead lights dimmed. An older gentleman approached one of the three stage microphones, greeting the audience “out there in radio land” with post-World War II advertisements and the station’s call letters — WBFZ. And so kicked off the “live radio play” of the classic “It’s A Wonderful Life.”

“We’re trying to recreate the feeling of being in a studio as an audience at a live radio broadcast in the 1940s,” said Lucretia Bell, actor and director of the production. “The show itself is presented as ‘a show within a show,’ where the actors are playing the performers from that 1946 broadcast who performed the beloved story.”

Based on the classic 1946 film of the same name, the story was adapted into a “live radio play” by Joe Landry in recent years, premiering onstage in 1996.

“We hope to transport the audience to the world of Bedford Falls, which is the plot of the story, and also the world of the Christmas season in 1946,” Bell said. “Back in the day, people would gather around the radio and listen to plays, and also watch the radio broadcasts live. And what we’re trying to do is bring back that medium.”

The 90-minute performance features seven stage actors and three noise actors. With the entire show focused on the ear rather than the eye, all the actors had to adjust their stage knowledge into a whole new realm of thought and interaction.

“This style of play really lets the actors explore their limits and also the opportunities of what they can achieve onstage when you’re focused on audio and not visual,” Bell said. “Audio also lets you explore a broader range of settings and characters, seeing as you don’t have to worry about constant set and costume changes.”

Sitting in the dark theater, you feel yourself drifting into some alternate universe, where the show is unlike anything else you may experience in our modern world (except perhaps NPR’s “A Prairie Home Companion”). It’s wild to see just what household items the noise actors use to mimic whatever the script reads: an iron brush and washboard to represent a moving train, a hair comb symbolizing crickets and frogs, etc.

The years on the calendar flip backward as the performance unfolds. You start to immerse yourself into the past, one of innocence and community found in this iconic tale of George Bailey and his quest for salvation.

“It’s really incredible to have the ability to bring these settings and this story to life,” Bell said.