This must be the place: Christmas Jam, now more than ever 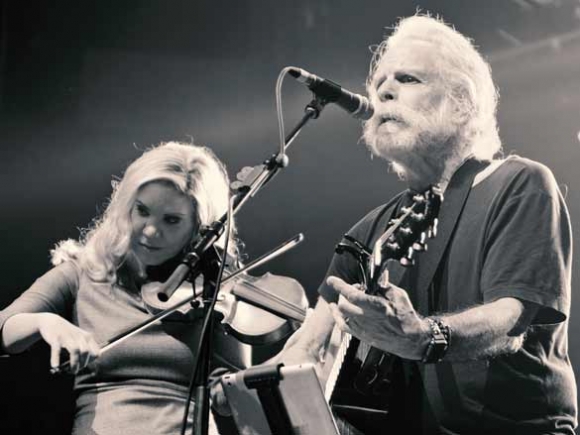 “You don’t know me but I’m your brother/I was raised here in this living hell/You don’t know my kind in your world/Fairly soon the time will tell/You, telling me the things you’re gonna do for me/I ain’t blind and I don’t like what I think I see/Takin’ it to the streets…”

When legendary singer Michael McDonald sang those words to his 1976 Doobie Brothers hit “Takin’ It to the Streets” in Asheville last Saturday night during Christmas Jam, a sense of not only urgency, but also unity washed over the enormous crowd filling the U.S. Cellular Center.

Celebrating its 28th year, the Christmas Jam has become more than a hometown homecoming and Asheville Area Habitat for Humanity fundraiser for guitar virtuoso Warren Haynes, it has also become a touchstone for our culture, and a clean slate of intent and purpose as another year comes to end, another ready and roaring to begin.

Well, 2016 was quite the year, eh? Just when you think things in our country and our world can’t get any wackier or darker, they somehow do. And as the hearts and minds of Southern Appalachia and beyond entered the Christmas Jam, thoughts of this topsy-turvy year rang loudly in those souls in search of melodic remedies.

Before he jumped into his set, McDonald took a moment to express his sentiments to the sold-out arena. He spoke of how we as a people must never stop the fight for equality — the one true freedom. His words ricocheted around the space, giving a much-needed sense that we aren’t alone hoping and working towards a better tomorrow, as the audience erupted into a raucous cheer.

Standing in the photo pit, surrounded by thousands of music freaks and musicians, I found myself in awe of those voices and faces on both sides of the microphone. With all of the noise on the television and in the news, we sometimes lose sight of just how much beauty and love is actually around us at all times.

It was the Bob Weir (Grateful Dead) and Alison Krauss duet of “Peggy O” alone onstage, his acoustic guitar and her fiddle echoing into the universe. It was Weir and bassist George Porter Jr. bouncing riffs off each other, all while saxophone wizard Branford Marsalis and guitarist Eric Krasno (Soulive) orbited around the pair. It was the 40th anniversary tribute to The Band’s “The Last Waltz,” a collage of classic 1960s/1970s rock songs that shine a light on trials and tribulations of blue-collar America, a sentiment that still finds itself at a crossroads in the 21st century.

With its 30th birthday on the horizon, Haynes and Co. have used the annual event to raise millions of dollars and build dozens of homes for the Asheville Area Habitat for Humanity. It may seemingly be a drop in the bucket in the grand scheme of things, but remember, if everyone put in their drop we’d have enough to go around. And Haynes is a leader in that charge for making sure a helpful and welcoming hand is always extended to fellow man.

What Christmas Jam represents is that last hurrah of the year, the perfect and ideal bow tied at the end of the calendar. And yet, this year’s showcase seemed more meaningful that previous ones. This isn’t to knock past lineups. But, what one felt in that arena last weekend was a sense that we’re at the start of a long journey into the unknown. The difference in being there, say compared to just having these thoughts alone in your house, is that though you feel the road will be hard and perhaps treacherous, there are millions and millions of folks standing alongside you, willing to push ahead into the depths, to someday shift the pendulum of humanity back in the right direction.

This isn’t over-exaggeration or over-indulgence of adult beverages in the presence of your favorite musicians. This is real life emotion, planted and cultivated by the sounds of change, camaraderie and collaboration only found in the confines of live performance.

Normally, I’d walk away from Christmas Jam with a sentimental kick in my step at the culmination of another year on this rock hurdling through space. This time around, however, I found myself thinking about how the event honed in on what it means to be human and all those thousands of folks in attendance that will be sent back into the world — as a productive and positive force — when the last note is plucked, the last light turned off. Well, at least until next December.

4 “The Revival of the Hippie Counterculture” talk and discussion with Michael Lenz will be held at 7 p.m. Thursday, Dec. 15, at the Macon County Public Library in Franklin.