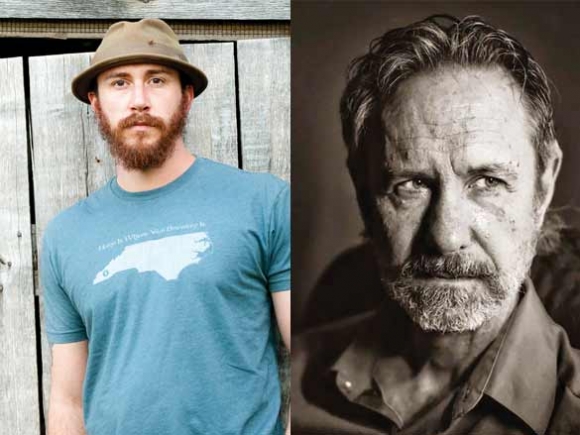 The works by Rash and Joy are on the awards’ “longlist,” along with books by authors from around the world, as selected by librarians from 40 countries. That larger collection of literary contenders will be pared down by an international panel of judges. The “shortlist” of nominees will be announced in April, with the winner of the award to be revealed in June. The Dublin Literary Award carries a cash prize of more than $100,000.

The news that a faculty member and a two-time alumnus have been nominated for the significant award has created a buzz of excitement around the Coulter Building, home to WCU’s Department of English, said Brent Kinser, head of the department.

“To be named as a longlist finalist for the prestigious International Dublin Literary Award is a nice honor,” Kinser said. “To have two writers associated with the same school, as in our very own Ron Rash and David Joy, is a remarkable achievement, one that says volumes about both writers and the English department to which they belong, one as a professor and the other as a former student.

“Ron and David remain bright stars in the crown of a department that has many and various stars in it. We’ll all be looking forward to the announcement of the shortlist in March and hope to see their names again. Now that will be the cause of major celebration,” Kinser added.

Rash, an award-winning author, came to WCU in 2003 as the university’s first Parris Distinguished Professor of Appalachian Culture. Above the Waterfall tells the story of the sheriff of a rural county who is nearing retirement and a park ranger who is haunted by her past and how their paths cross when a local man is accused of poisoning a trout stream. Rash’s latest work, The Risen, hit bookstores in September. He is author of six other novels, including The New York Times bestseller Serena, and numerous collections of short stories and poetry.

While pleased to be on the longlist himself, Rash said he was delighted at the inclusion of one of the English program’s graduates. “I am proud of David and proud of all of the English department’s teachers, especially Pam Duncan and Deidra Elliott, who taught and encouraged David at WCU,” Rash said.

Joy earned his bachelor’s degree in English literature in 2003 and his master’s degree in professional writing in 2007. His debut novel Where All Light Tends to Go is about a young man trying to break out the cycle of violence of his drug-making and abusing family. His second novel, The Weight of This World, is scheduled to be published in March.

“Sometimes an award nomination is plenty enough even if you don’t take it home and, with the International Dublin Literary Award, just being on that list is aplenty,” Joy said.