This must be the place: Last call at the Brar Patch 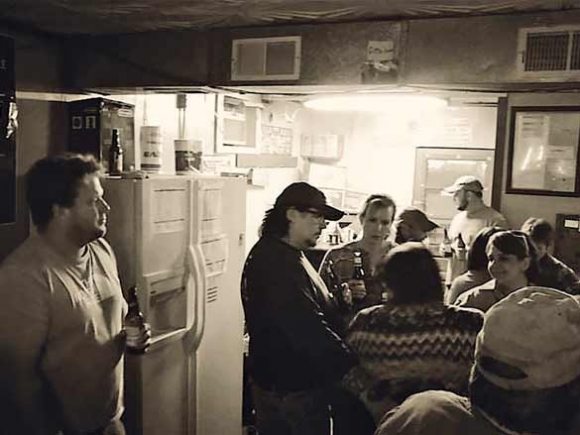 When asked just what the Brar Patch is, Trey Smith was quick with that response. Huddled under a flickering light of the tiny bar, Smith gets head nods of agreement from several folks nearby. Standing next to him was Marty Owens.

“I’d say it’s like an English pub, a place folks go where they know everybody, have a cold beer, and where the old-timers are respected,” Owens said. “It really is a loss for Haywood County.”

Situated at the intersection of Brown Avenue and South Main Street in West Waynesville, the Brar Patch isn’t visible from the road. Sure, Jim’s Drive-In sits at that location, but just where is this secret watering hole? People that have lived in town most of their lives didn’t even know it existed (the unassuming side door at Jim’s is the entrance) until they found out the entire structure would be doing last call for the last time on Nov. 22.

“To me, this is the last redneck old-fashioned bar in all of Western North Carolina,” said bartender Diane Volden. “I love it, and I love the people — they’re mine.”

When I moved to Waynesville from Upstate New York in August 2012, I was (and still am) in search of real-deal characters, those iconic and irreplaceable faces and places that make Western North Carolina and greater Southern Appalachia so magical and mysterious. And when I asked a friend (a Haywood native) just where these critters could be found, she simply said, “Well, darling, you need to go to the Brar Patch.”

So, skipping out of the newsroom during my lunch break, I drove to Jim’s. I wandered around the building a couple times before I noticed a small tarnished sign hanging over the side door. It read: “Brar Patch.” Stepping into the closet-sized space, there were enough seats for a half-dozen folks, maybe enough standing room for another dozen. But, on this day, only a few seats were taken as I bellied up and order a Budweiser (your choices are Bud, Bud Light and Michelob Ultra). And I’ll be damned if it wasn’t the coldest bottle of suds that ever touched my lips as some Webb Pierce or Kitty Wells melody came to mind.

Immediately, those sitting at the counter questioned my entrance. This wasn’t a place strangers just wandered into. But, what seemed to be an interrogation turned out to be a right-of-passage as 21 questions and a slight harassment for being a Yankee that led to four new friendships (including the bartender) by the time I finished my second beer and headed back to the office before anyone noticed I was gone.

And for the better part of the last five years, I’d bring friends (and even my parents) to the Brar Patch, all of which were automatically accepted when they rolled in, a big “Hey Garret, where in the heck have yah been?” echoing from someone tucked away in the corner.

Opened in 1939, the bar is quite possibly the oldest establishment of its kind left in Western North Carolina. Once the main spot for social interaction for a handful of now defunct factories close by (including Dayco), the Brar Patch is where the old-timers, long-time farmers, construction workers and the good ole boys would gather to banter on about, well, the good ole days. It’s a place where all of the world’s problems would seemingly be solved by the time last call rolled around at 6:30 p.m. or so.

“I’m 78 years old and I’ve been coming here for 50 years,” said Wade Duncan, situated at his usual seat at the end of the bar. “All of us have been here so long. This is my family, and that’s what it’s all about — family.”

And, as I stood there on Nov. 22, being handed another beer from a round paid for down the line, I kept thinking of my grandfather. A lot of my appreciation for spots like these is that a place like the Brar Patch is where my grandfather would probably sit and talk, perhaps pull a few jabs of hearty laughter, just like he used to do in a similar bar back up on the Canadian Border years ago. The Brar Patch is where a lot of folks’ grandfathers and grandmothers, fathers and mothers, brothers and sisters probably frequented.

“My grandpa used to bring me in here when I was a little girl. He’d get his beer and burger and I’d get my hot dog and soda,” said Stephanie Pruett. “He’d hang out with all his friends, hell they all grew up together. This is where the salt-of-the-earth folks come and gather — this is the heart of Haywood County.”

If Nov. 22 truly was the last call for the Brar Patch, then a long and dusty chapter of this area’s history has finally closed. If it does reopen in February, like a few whispers eluded to, then one can only hope to cross that threshold once more.

But, what remains are the memories. It’s places like the Brar Patch that are the last vestige of the old school, a bridge to an era that’s often all-too-easily forgotten, but not in the hearts and minds of those who were there, and lived it.