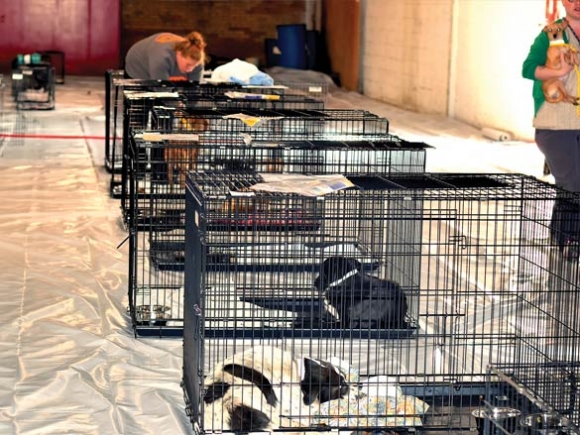 After serving as an ad-hoc temporary animal shelter, the old Lea Industries building on Lea Plant Road in Hazelwood is once again empty and silent.

Haywood County Animal Services moved everything out on Nov. 13 after utilizing the facility for just nine days to catalogue, inoculate and care for the animals, surrendered from a property in Canton Nov. 5.

County Director of Animal Services Doyle Teague said that of the 127 total dogs, 33 dogs were adopted out and 94 were transferred to other animal rescue organizations such as Sarge’s and Duke’s.

None, Teague said, needed to be euthanized.

The owners of the property where the animals were found — James and Angela Croft — may yet face charges related to the hoarding.

“We’re evaluating that right now, now that we’ve got the dog situation under control,” Teague said.

The Crofts voluntarily surrendered the animals after a complaint prompted county officials to visit the property where more than 50 dogs were living inside a singlewide mobile home and dozens of others were chained or caged on the property. Some showed signs of malnutrition, or had mange, but overall, the condition of the animals seemed generally good.

The owners voluntary surrendered the dogs, a fact Teague says may work in their favor.

“It did help, because we were able to help the dogs more quickly” without resistance from the owners. Their cooperation, Teague said, would be “factored in” to the county’s decision on what charges, if any, will be pursued against them.

Teague said he was very encouraged by the community’s response to the emergency, and plans a debriefing session next week to evaluate the county’s response and prepare for future emergencies.

He added that they’d kept the contact info of all the volunteers who dropped by the temporary shelter, in the event that similar occurrences transpire in the future; he estimated that all in all, more than 190 people lent a hand at some point.

Some, he said, spent many hours cleaning cages and feeding dogs, while others just dropped by to take dogs out for walks.

Community donations of cleaning supplies and food left the temporary shelter fully stocked during the operation, resulting in an unlikely windfall for the county shelter and rescue organizations.

The shelter ended up receiving “several hundred” bags of dog food weighing thousands of pounds, which was more than they could use. Teague said the county kept some for the existing Hemlock Street shelter, and gave other rescue organizations the rest.