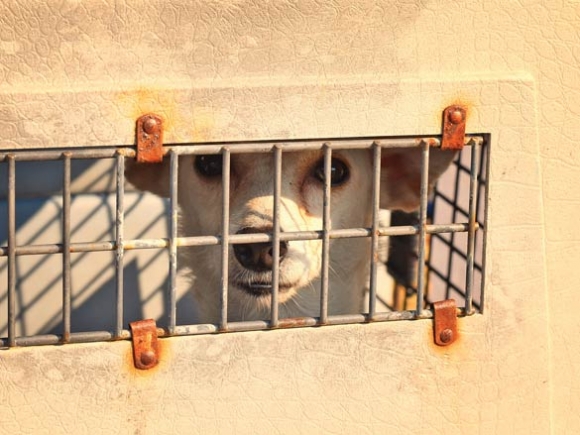 Haywood County officials and volunteers continue to minister to the needs of 140 — and counting — dogs removed from a property on Terrace Drive in Canton over the weekend.

The dogs, which were voluntarily surrendered by their owners, require varying levels of medical care and a 72-hour quarantine. Some are pregnant as well.

A press release issued by Haywood County Animal Services Director Doyle Teague said that about 55 small breed dogs — Chihuahuas, dachshunds and the like — were living with their owners in a single-wide mobile home on the half-acre property, but dozens of larger dogs were being kept in kennels, a camping trailer and on chains around the property.

“My understanding is that animal services received an animal welfare concern report, which then allowed them to look at the property,” said Haywood County Program Administrator Dona Stewart on Saturday morning.

The owners, James and Angela Croft, appear to be in violation of several county ordinances regarding the care of companion animals, especially those that demand “minimal standards of nutrition, sanitation, shelter, and veterinary care” and prohibit keeping animals in a “severely” overcrowded environment.

Currently, the animals are being housed at a makeshift shelter located in the former Lea Industries building in Hazelwood, leased by the county from building owner Kelly West for $1.

Teague’s been sleeping in the facility at night because the lease stipulates a 24-7 presence at the building, although he admits he hasn’t been getting much shuteye.

Volunteers in the building as well as county employees and inmate work crews have been cataloging demographic information about each dog, vaccinating them, feeding them and cleaning up after them with an eye on adopting them out after their quarantine expired on Nov. 8.

“For the amount of animals that were in the home, they’re in pretty good shape,” Teague said. “You’ve got some mange and some undernutrition, but overall, they’re not too bad.”

On Monday, county commissioners took an added step toward rehoming the dogs; since the current county shelter is full, commissioners waived adoption fees for 45 days.

Luckily for the county, this animal rescue came just days before a regularly scheduled meeting of the board of commissioners; had it not, County Manager Ira Dove said, it could have been up to two or three weeks before the fees could be waived.

Alternatively, the county could have called a special meeting to adjust the fees.

Instead, commissioners — at the urging of Chairman Mark Swanger — gave Dove the power to waive such fees in future emergencies at his discretion.

Although commissioners Michael Sorrells and Kirk Kirkpatrick initially balked at giving the county manager what Sorrells called “blanket authority,” Kirkpatrick opined that any county manager abusing the privilege would be “taking his position in his own hands.”

The measure passed unanimously, however, giving the county manager — whether it is Dove or someone else in the future — the ability to incentivize adoptions.

The Asheville Humane Society, Sarge’s Animal Rescue Foundation, Duke’s Animal Haven and Friends of the Haywood County Animal Shelter have also been working toward that end, providing hours of volunteer labor and thousands of dollars of donated food, bedding and cleaning supplies.

Those interested in volunteering or donating should visit the Friends of the Haywood County Animal Shelter Facebook page for more information. Dogs will be available for adoption beginning Nov. 9.