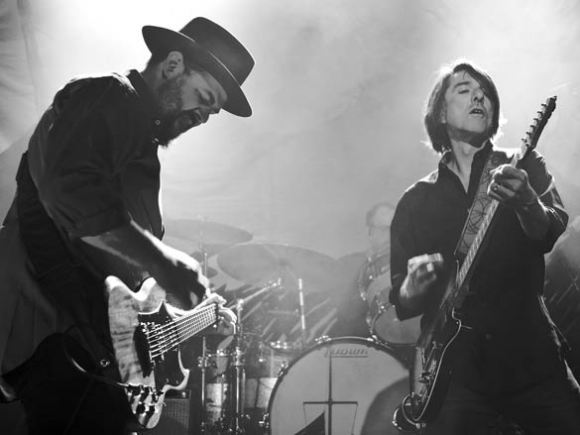 The most important band in America

My ears are still ringing.

After catching two nights of the Drive-By Truckers this past weekend (Knoxville/Asheville), my eyes were bleary, my head still somewhat rattling. Not just from the sheer force of the rock band, but also from the thoughts bouncing around my mind from what I witnessed.

There isn’t a group as raw and rocking, as political and satirical, as culturally relevant and societally important as the Truckers. It’s truth. And throughout the last two decades, the Athens, Georgia group has brought the trials and tribulations of the South into the national and international spotlight. Their music isn’t meant to vilify or single out the South, rather the melodies act as an often-uncomfortable history lesson that’s still being written to this day.

In previous albums, the Truckers would carefully place their political stances and messages in songs about sometimes forgotten or highly publicized events of decades prior. With their latest record, “American Band,” they throw the bloody travesties and injustices of the “here and now” right at your feet. No subject is left out, where it’s about that timeless notion of “nothing’s the same, everything is the same,” in terms of where we are as a people ideologically.

Opening track “Ramon Casiano” showcases the 1931 murder of a 15-year-old Mexican boy in a border town by a 17-year-old white American teenager named Harlon Carter, who eventually grew up to help transform the National Rifle Association into the political powerhouse it is today. And just as that tune resonates, “What It Means” echoes out of the speakers with the sadness and matter-of-fact anger aimed at the “stand your ground” 2012 shooting of Trayvon Martin, a 17-year-old African-American teenager in Florida.

The Truckers also dive into the 2015 mass shooting at Umpqua Community College in Oregon (“Guns of Umpqua”) and the careless corporate greed of Wall Street (“Kinky Hypocrite”). Each number hits as hard as the next, with fiery lyrics meant to more than stoke the smoldering coals of a confused and tired nation, “Does the color really matter/On the face you blame for failure/All the shaming for a battles losing cause/If the victims and aggressors/Just remain each others’ others/And the instigators never fight their own/Compelled, but not defeated/Surrender under protest if you must…”

And yet, the Truckers once again bring the big picture into focus with the poignant and simple “Ever South.” It’s a melody about the immigrants from Ireland, and how the people of that culture weren’t welcomed in America, ultimately leaving the northeast in hopes of a fresh start down south, “And I hear we weren’t welcomed here, at least not in those days/No one needs our drunken, fighting, thieving kind/But we settled in this new place and we worked it in our ways/And spread our kin upon it in due time…”

So, as I stood there, surrounded by hundreds of eager Truckers fans, the sound of the band pulsating around the venue, I found myself just observing the scene before me, really letting the music and atmosphere soak into my soul. You see, what the Truckers are trying to get across to you and me (and all of us) is that the problems of today were also the problems of yesterday, and will probably still be the problems of tomorrow.

With a “Black Lives Matter” sign hanging onstage, lead singer Patterson Hood would talk to the audience between numbers. The eternal optimistic realist, Hood knows damn well life isn’t sugarcoated, where if you wear rose-colored glasses, you might not notice the red flags. But, he will also be the first to shake his head in awe of how folks get so worked up — and usually for nothing — when it comes to relations between all walks of life. It’s about putting aside differences and finding common ground with fellow man, for what else do we have at the end of the day?

“Let’s love one another, dammit,” he yelled to raucous shouts and applause from the crowd.

Sure, by the time you read this column the 2016 presidential election will be decided. It will either be Clinton or Trump. But, regardless of who you wanted (or didn’t want) to win and lead the free world, what remains is us as a people. Come Wednesday morning, don’t shout at the TV or rip up the newspaper in anger. Take a deep breath and walk outside your front door. Make sure your interactions are kind, and also just. The chaos and madness won’t automatically show up because of one election result, and it also won’t disappear overnight either.

America has never been great, but we’re getting better, each and every day. I truly believe that, and I see it, too, each time the Truckers show up in town to kick us in the ass, reminding one and all just how great it is to be alive.

2 Acclaimed Texan singer-songwriter Radney Foster will perform at 7:30 p.m. Saturday, Nov. 19, at The Strand at 38 Main in Waynesville.

4 Storyteller Donald Davis will be perform at 6:30 p.m. Tuesday, Nov. 15, at Blue Ridge Books in Waynesville. He will also hit the stage at 7 p.m. Saturday, Nov. 19, in the Sam Queen Auditorium in the Folkmoot Friendship Center in Waynesville.