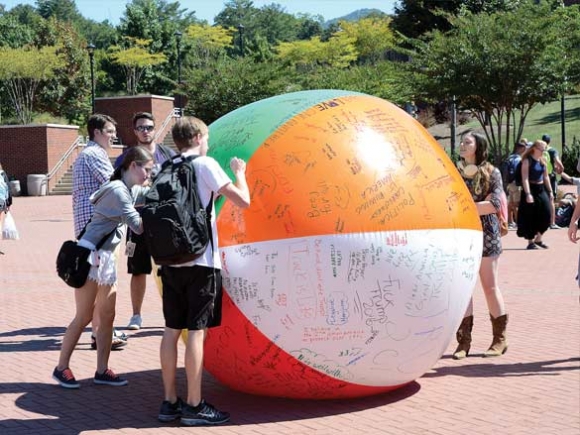 It was a sunny Constitution Day at Western Carolina University, and the colors shone brightly on the giant beach ball — dubbed the “free speech ball” — that the campus chapter of Young Americans for Liberty rolled from spot to spot.

“Hey guys, we’re fixing to go mobile,” said chapter president Garrett Smith, preparing to push the ball away from the fountain area where it had so far been waiting for students to come cover its plastic with Sharpied words.

“Share any opinion, especially the unpopular ones,” Aaron Littlefield, state YAL chair and a WCU alum, called out to passerby.

Plenty of students holding plenty of views heeded the call. Markings quickly gathered, messages ranging from friendly advice — “Smile, you’re not dead yet” and “Treat others the way you want to be treated” — to political — “Natives need more of a voice in America,” “Build that wall Trump 2016” or “F*** Trump 2016” — and everything in between.

“They’re just hyping up freedom of speech, and I was like, I can always get behind that,” said Kurt Fisher, a junior natural resources management student, of his reasons for signing the ball.

“The First Amendment — it shall not be infringed, you know?” said junior political science major Sarah Jimison. “We’re pretty much the only country in the world that has complete free speech, no matter what.”

In addition to markers, Littlefield and Smith offered the chance to sign a petition.

“I endorse the ‘Chicago Principles’ which ensure all members of the University community have the broadest possible latitude to speak, write, listen, challenge and learn and make clear it is not the proper role of the University to shield individuals from ideas and opinions they find unwelcome, disagreeable or even deeply offensive,” the petition read.

“Chicago Principles” refers to a set of ideals put forth by the University of Chicago concluding that “the University is committed to the principle that it may not restrict debate or deliberation because the ideas put forth are thought to be offensive, unwise, immoral or wrong-headed. It is for the members of the University community to make those judgments for themselves.”

According to Young Americans for Liberty, Western — though more hospitable to free speech than many other institutions — has policies on the books that limit freedom of speech and assembly more than should be allowed under the U.S. Constitution.

The petition garnered more than 200 signatures, about 2 percent of the student population.

“We just want to make sure rules aren’t on the books that can be abused by administration,” Littlefield said. “Administration changes. Sometimes they can be trusted, sometimes they can’t be, and we would just rather err on the side of more freedom.”

In particular, Smith and Littlefield take issue with policies that require “outdoor assemblies” to take place at least 50 feet from buildings and require student groups to notify the university 48 hours in advance of any assemblies or public addresses so that “safety measures may be provided if necessary.”

They say that these measures effectively create “free speech zones,” because on a campus filled with academic buildings and offices and residence halls, drawing a 50-foot bubble around every facility leaves little space where the policy would permit gatherings.

Littlefield also worries that the 48-hour rule could prevent “spontaneous speech,” as current events sometimes prompt a desire for immediate response or demonstration.

So, to protest the policies — especially the 50-foot rule — the YAL folks rolled their “free speech ball” around to various areas of campus, including to spots within 50 feet of a building. The idea is that, if officials tried to stop them they could talk about whether university policy should trump Constitutional rights, while if the activity was allowed they could build a case that the policy should be repealed due to nonenforcement.

The event at Western wasn’t an isolated incident. YAL has conducted 418 similar events across the country.

“Many college students are unaware that their campus has restrictive speech codes, but are appalled when they learn that their university has such codes,” said Alexander Staudt, director of free speech for YAL.

The reception at Western was “friendly and welcoming” from both students and faculty, Littlefield said, and no pushback from administration. However, that hasn’t been the case everywhere. A similar demonstration at the University of North Carolina Asheville resulted in two faculty members informing the group that if it wasn’t a student group —YAL’s Asheville chapter is not officially recognized as a student group — it must have asked permission 48 hours beforehand to demonstrate anywhere besides a designated free speech zone, Littlefield said. According to Staudt, the most egregious example of free speech infringement that YAL chapters have experienced came at Arkansas Tech University, where campus security told students they had to move to a free speech zone across campus because “the school’s policies trump the constitution.”

But how restrictive are Western’s rules, really?

According to Kevin Koett, dean of students, there’s not much to protest.

“I think there are some colleges and universities that have concerns and need to be challenged on some of the policies they have,” Koett said, “but I would absolutely say Western is not one of those — and I do not say that lightly.”

Western is the seventh institution where Koett has worked, and from his perspective, “Western does more than any other institution that I’ve worked at to promote freedom of speech.”

There needs to be some buffer around buildings, Koett said, simply from a safety point of view — in the event of an emergency, the exit to the building needs to be clear, not blocked by a cluster of demonstrators. And besides, students and faculty need to be able to easily get to their classes and appointments without having to push through to the door.

“It falls into not blocking pedestrian traffic,” Koett said.

The 48-hour rule, he said, also makes sense. He said it doesn’t prevent spontaneous speech but does require students organizing an “assembly” or “public address” to let the university know so that any staffing, equipment or other preparations can be put in place beforehand.

It would be difficult to make the case that the university shies away from controversial speech or tries to squelch student demonstration, he said. In the weeks following the free speech ball, two other issue-driven student demonstrations were held. On Sept. 23, a Black Lives Matter rally was held to protest the shooting of Keith Lamont Scott, an African-American, by police in Charlotte — Koett said that “hundreds of students sat in silent protest and then afterward there was a good dialogue.” Three days later, a Blue Lives Matter event was held, which drew about 100 people to cook out together, sharing food and dialogue.

This spring, following a pair of dueling political-racial demonstrations, the university reacted by hosting a dinner to which leaders of both sides were invited to talk about their perspectives and concerns face-to-face, in a civil manner. Koett said he’s planning a similar dinner this fall.

The policies don’t necessarily need to be changed, Koett said, but there will always be room for improvement in helping students to more effectively and productively exercise their free speech rights.

“Where we’re at right now is trying to facilitate some dialogue and some conversation about what’s next,” he said. “How can we implement some things that are going to make Western a better institution?”

YAL, however, holds to its view that policies need to be changed, and any limits on when and where speech may occur — as long as it’s not directly threatening speech — should go.

“If a limitation on our First Amendment rights violates the Constitution, I do not believe it makes sense,” Staudt said. “At WCU the school places limitations on where students may peaceably assemble, a right guaranteed to us by our founding fathers.”