Livestock you love: Bethel man carves out a life among alpacas 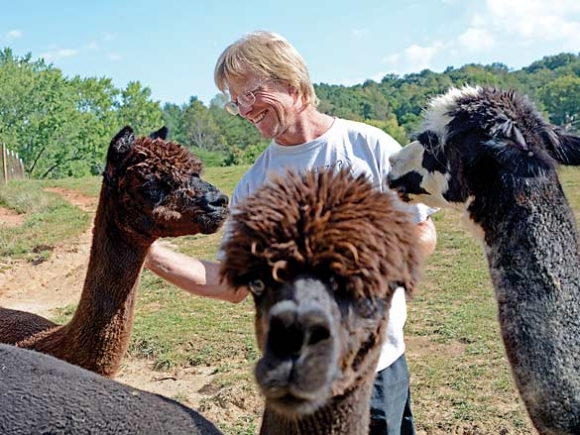 A cadre of curious animals gathers at the gate as Joe Moore, owner of Indian Springs Farms in Bethel, approaches the pasture.

“Hello girls,” he says, addressing the herd of bright-eyed, tuft-headed alpacas. As he opens the door, some draw near to sniff his shirt or hands, while others — the shier ones, presumably — hang back to gauge the situation from afar.

He addresses them by name — Ashley, Fifa, Tessa, all monikers taken from songs and musical artists — and rubs a few necks. That’s how alpacas like to be petted, he explains. And you better not try patting them on the head, because that’s a great way to get spit on. Female alpacas don’t have any top teeth, save a few molars in the back, so they can’t bite, but they sure do know how to hurl saliva.

Watching Moore, 54, interact with the friendly group of camelids is a bit like observing a person amid a cluster of curious, oversized dogs. There’s the soft fur, the invasion of personal space, and the laughter, though that last one may be partially due to the adorably off-kilter look that alpacas live with — long necks, tousles of long hair atop sheared bodies, abnormally large teeth always visible between parted lips.

But unlike most dogs, the alpacas are not pets.

In fact, when it comes to alpacas you have to be careful about treating them too much like pets. An alpaca that’s babied too much when it’s little can actually acquire what’s called “berserk syndrome.”

“If they’re overhumanized when they’re young and they think they are a human or humans are them, because they’re herd animals they want to fight for that alpha position,” Moore said. “If they’ve always viewed you as an equal they are going to jump on you or attack you.”

He’s got one male alpaca, who he acquired as an adult, with that penchant. It’s a never-ending project to earn and maintain the animal’s respect.

On the whole, however, it’s easy to see what makes alpacas loveable.

“Love” is a word that Moore uses quite a lot when discussing life on Indian Springs Farm, where he lives with his wife, two teenage children and varying herd of 15 to 28 alpacas.

He’s been in the business for 11 years, kickstarted by a suggestion from his father, a businessman who was intrigued by the tax write-offs an alpaca purchase could afford. In the federal Jobs and Growth Reconciliation Tax Act of 2003, which allowed businesses to write off the entire cost of buying used or new equipment, alpacas purchased for business purposes were listed as one of the eligible write-offs.

At the time, Moore and his wife Laura Pate were sharing a director’s position at SOAR Camp in Balsam. They had young kids, and both wanted to have a schedule flexible enough to allow plenty of time with the children.

“We woke up every day and said, ‘Do you want to work or do you want me to go to work?’” Moore recalled.

It was a great arrangement, Moore said, but after his dad approached him with the alpaca proposal the couple spent two years considering the question. Ultimately, they decided they’d give it a try. Moore and his dad formed an LLC, and Moore managed the farm while Pate started work at SOAR full time.

It’s worked out well. Western North Carolina is a good place to raise alpacas — there are about 150 of the animals within a 30-mile radius of the farm, Moore said — due to its cooler temperatures in comparison to the rest of the Southeast.

But the landscape of alpaca agriculture has changed a good bit over the past decade.

When he first went into business, female alpacas were selling for about $20,000. The alpaca business was still relatively new, with the first 10 alpacas imported from their native South America in 1980 and large-scale importation beginning in 1983.

In the full circle of alpaca-related husbandry, Moore just about does it all. He breeds alpacas, sells alpacas, shears alpacas, weaves scarves from alpaca yarn — the skeins are stored atop a ping pong table in his basement, each bag labeled with the name of the alpaca who grew its contents — and even sells their poop as fertilizer. Alpaca poop is just about the best fertilizer there is, not requiring any sort of composting prior to placement in a garden, though if you’d asked Moore 10 years ago he’d never have guessed that he’d one day be offering animal waste for sale.

But his favorite — and the most profitable — component of the business is shearing.

“I like to get my hands on the animal and see the fiber,” he said. “When it comes rolling off the animal, it’s beautiful.  To see how shiny it is and how much crimp there is and how fine it is, it’s kind of like opening a Christmas present.”

If shearing season is Christmas, then Moore is the Santa Claus of the Southeast. He sheared 15,000 alpacas and llamas this year and has 17,000 scheduled for next spring. Each year, he and a partner spend 10 weeks traveling around from farm to farm.

“It’s the biggest day on the farm,” he said. “People love to see me, give me milk and cookies.”

He starts early, before 8 a.m., and keeps going till sundown, basically. It’s hard, physical work, involving lifting animals that on average weigh 150 pounds, placing them on the ground and then shearing them with a 6-pound machine that vibrates at 3,600 rpm.

“I can’t decide if it’s one of those things that’s keeping me young or making me old,” Moore said. “I’m never stronger during the rest of the year than I am at the end of shearing season.”

Fall, for Moore, is a calmer time of year. He’s home with his alpacas, mostly, managing any conjugal visits that have been arranged between his male alpacas and breeding females from other farms, weaving scarves and caring for the animals.

“Farming is a lot of freedom,” he said. “Even though it’s every day, at least it’s flexible.”

Indian Springs Farms, located in Bethel, is a hub for all things alpaca-related. Owner Joe Moore sells alpacas, yarn made from their fiber and woven products made from their yarn. He breeds alpacas, and he also shears.

While some people may use the words “alpaca” and “llama” interchangeably, the two words refer to separate species that are quite different from each other, though they are both members of the camelid family.

Alpacas are shorter, with shorter faces, curved ears and finer fiber than the larger llama. And while alpacas are quieter, more docile herd animals, llamas are more independent.