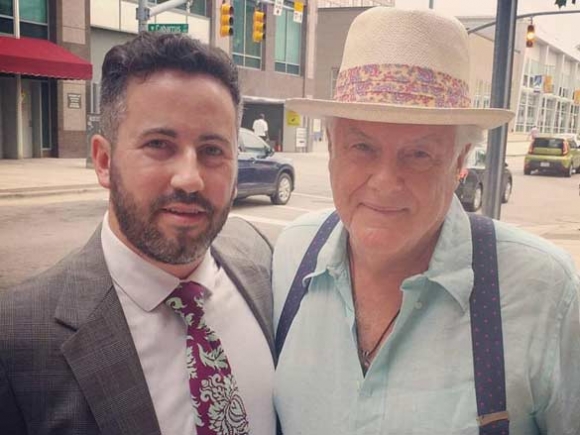 Stepping into the grand ballroom at the Raleigh Convention Center last Thursday morning, I really didn’t think the occasion would be as big as it actually was. It was the awards luncheon for the International Bluegrass Music Association and I was among those nominated for “Bluegrass Print/Media Person of the Year.”

Though the real deal IBMA award showcase and reception (black ties and dresses and such) was later that evening, I figured the luncheon would be some small affair, where I could get away with wearing my Kmart jeans and $5 sport coat from Goodwill. But, as I entered the enormous ballroom, filled with hundreds of the industry elite, it became quickly apparent I was in the running for an honor far beyond my scope of realization.

I’ve always been around bluegrass, in one form or another. Two cow towns over from my childhood home in Upstate New York resided The Gibson Brothers, one of the biggest names in the modern era of the genre. But, it wasn’t until I landed my first interview with bluegrass icon Peter Rowan that I began my descent down this melodic rabbit hole. Being a lifelong “Deadhead” (Grateful Dead), I came across Rowan and his work with Dead guitarist Jerry Garcia in the short-lived — but endlessly influential — bluegrass act Old & In The Way. From there, Rowan led me to the likes of Bill Monroe, who Rowan got his start in the business in the early 1960s singing alongside. And so on, and so on.

In November 2006, at age 21 and a senior in college, I ventured up from my school in Connecticut to the Iron Horse Music Hall in Northampton, Massachusetts. The drive was rainy, with a few snowflakes hitting the windshield as I wandered deeper into the Berkshire Mountains. Sitting in the venue, I waited for Rowan, wondering if he’d ever show up or if this opportunity was a bust. He finally blew in the door, the cold New England air following close behind, guitar in hand, in a hurry, but ready to chat.

We interviewed for the better part of an hour. He spoke at length of his time with Monroe, Garcia, and a slew of other names I didn’t know, but would come to adore as I looked up their music.

The article from that interview was published a month later in the now-defunct State of Mind Music Magazine. My first feature, right there, laid out in fresh ink and crisp, high-resolution photographs. I remember opening the magazine to the feature, sitting in some Burger King right outside of Burlington, Vermont, sipping on a Dr. Pepper and nibbling on a lukewarm double cheeseburger. I couldn’t stop looking at my byline. I had written this, and now I couldn’t wait to write the next piece and do it all over again.

And, luckily, for the last decade, that chase of written word and bylines, of discovering music and those who create it, has never become exhausting to me. Heck, it is an internal fire that glows brighter each day. Though I didn’t win the IBMA award this year, sitting there in that ballroom, watching some other longtime and beloved writer accept it, I felt more logs of my intent and desires being thrown onto that internal fire. It wasn’t about winning the award, per say, it’s about the wild and wonderful journey that led to getting the nomination in the first place — the endless miles, faces, songs, stories and, ultimately, the friendships.

Within my musical explorations, I’ve found there truly is no style of music as honest and vulnerable as bluegrass. It is the heart of this country, where freedom and failure reside at the same crossroads, and how a banjo lick or songbird duet takes any frown and turns it upside down. Bluegrass is the essence of the human condition, for good or ill, and amid the vast forest of that “high, lonesome” sound the truth is revealed — the inevitable ticking clock of time and place, chance and opportunity.

And as my publisher and I rushed down the sidewalks of downtown Raleigh, in an effort to get to the evening award showcase and reception in time, a familiar figure was standing at the corner of the street. It was Peter Rowan. I said, “Hey, stranger,” and gave my old friend a hug. He was surprised and happy to see me.

“You look good, son,” Rowan said, adjusting my tie that held the suit together, physically and aesthetically. “You know, Bill Monroe used to say and do that to me when I wore a suit back in the day.”

I bid Rowan farewell and headed for the Duke Energy Center. But, there was more of a kick in my step than there had been just a block or two ago — that sense that you’re exactly where you’re supposed to be in life, and that’s pretty swell, eh?