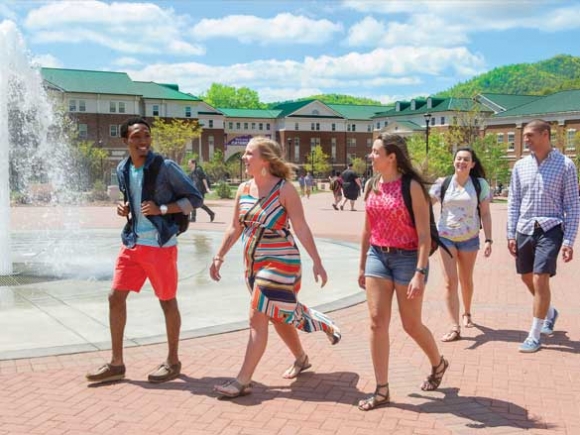 Western Carolina University saw its previous high-water mark for enrollment blasted away this year as final student counts for 2016 came in, with new records set for both total enrollment and freshman class size.

This year, 10,806 people will call themselves Catamounts, up from the record 10,382 set in 2014. Of those, 8,166 will be taking classes on the Cullowee campus, with the remainder enrolled online or reporting to the Biltmore Park campus in Asheville.

Meanwhile, the 1,913-strong freshman cohort is overcoming a record set all the way back in 1972, when 1,859 freshmen enrolled in a GI Bill-fueled post-Vietnam boom.

“The growing interest in WCU speaks to the quality and value of our educational programs and the opportunities the university and the surrounding area offer to our students,” said Timothy Metz, assistant vice chancellor for institutional planning and effectiveness.

The record-breaking freshman class size is due both to external factors such as a large number of high school seniors this year as well as to strategic moves by WCU, said Phill Cauley, the university’s director of student recruitment and transitions. WCU has been focusing more on overall student achievement rather than just standardized test scores to make admissions decisions, and the Office of Admissions has revamped its communications with potential students to encourage them to visit campus and see for themselves. Earlier invitations to join the WCU Honors College program and earlier scholarship information have also helped, better attracting high-achieving students.

Health care and science programs have also been a big draw, with WCU’s engineering and nursing programs growing by more than 90 percent over the last decade and numbers rising in forensic science, biology, emergency medicine and athletic training programs.  New programs, such as the expanded hospitality and tourism program at the Biltmore Park campus in Asheville and a reinstated graduate sports management program have also contributed.

Then, there are also the superlatives that WCU has seen come its way, such as its place in Kiplinger’s Personal Finance magazine’s lineup of best college values for 2016 — the magazine ranked WCU 73rd nationwide for in-state students and 76th for out-of-state students. The school has also, for the third year running, taken the top place in Blue Ridge Outdoors’ yearly poll looking for the Southeast’s top outdoor adventure college.

Students opting to take on a new identity as Catamounts aren’t just bandwagon jumpers, however. Judging by metrics such as high school GPA and ACT scores, their academic quality is rising.

“Everything is just significant gains as far as our freshman class this year,” Lowell Davis, vice chancellor for student success, told the WCU Board of Trustees’ Academic Affairs and Personnel Committee during their quarterly meeting last week.

“The numbers across the board I’m very pleased with, but also the GPA rise is good to see,” said committee chair Wardell Townsend, reacting to Davis’ report. “It would be all right with me if it just leveled off there, because otherwise I wouldn’t have been able to get in.”

The quip elicited a round of laughter from the committee, with someone asking whether there was a GPA requirement to be a trustee.

“We might get kicked off the board,” joked committee member Grace Battle.

The 2016 student body is notable on another key metric — retention.

WCU had battled a historically low retention rate for years, celebrating a journey to the 80 percent mark last year, meaning that 80 percent of the previous year’s freshman returned for their sophomore year in the fall. Compare that to 2007, when the figure sat down at 67 percent. By 2012, the university had gotten its retention rate up to 74 percent but announced a goal to boost it to 80 percent by 2020, a goal it met five years early.

To address the issue, WCU had created Davis’ position, which aims to pinpoint students at high risk of dropping out and work to keep them in school. That’s had a lot to do with the improved retention rate, the university believes, while external factors — the 2012 legalization of countywide alcohol sales, improved student satisfaction due to more successful football and marching band organizations and unique offerings such as the university’s mountain biking system and proximity to other outdoor pursuits — have likely played a role as well.

Regardless, the trend is holding steady. Retention for 2016 stayed virtually level with last year’s, holding the line at 80 percent.

“We are excited we are maintaining an 80 percent retention rate, which is a success for Western,” Davis said.