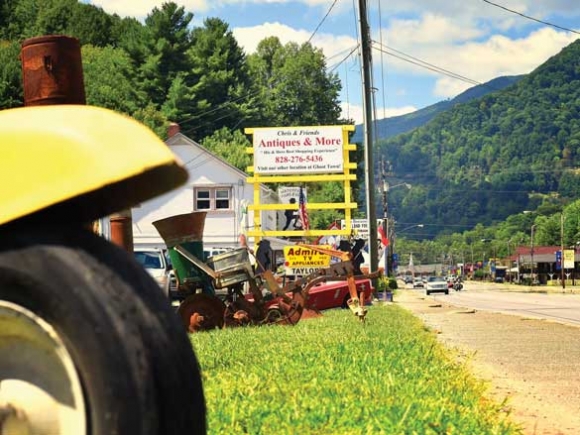 Although the closure of Ghost Town in the Sky several years back has left many Maggie Valley businesses struggling just to keep their doors open, others like the half-century-old Joey’s Pancake House and the 15-year-old Wheels Through Time motorcycle museum have continued to succeed despite slowly climbing tourism numbers amidst the lingering aftertaste of the worst recession in living memory.

But another segment of Maggie Valley’s tourism-based economy — the retail sales of vintage, antique and locally made furniture, souvenirs and crafts — has also fared well, just as town officials consider how best to regulate it.

“I think everybody is in agreement that Maggie Valley needs to better promote itself and market itself,” said Town Planner Andrew Bowen. “You can bring people here, but they’re going to expect a certain product.”

That “product” may or may not include the miles of antique stores that line both sides of Soco Road. As residents and visitors enter Maggie Valley, they’re often confronted with contemporary and old-fashioned collectables, from rustic hardwood headboards to Confederate flag Snuggies, placed in close proximity to the road.

That’s part of the reason why Bowen’s been hard at work drafting a new retail sales ordinance for the city, which will be up for public input at Maggie Valley Town Hall Sept. 15.

“When you come in to Maggie Valley, especially in our business core, there’s some sort of coalescence between all the business, whether it be antiques, crafts, vintage cars. You know that you’re in a place and you don’t feel like it’s just a bunch of separate nodes,” Bowen said. “When you go to a successful town with a main street that people love, there’s a certain aesthetic character to it.”

Defining and unifying the aesthetics of that core with foresight and fairness, Bowen said, is his goal. He also said he’s received minor complaints from business owners, residents and visitors about the ever-encroaching merchandise that ranges from aesthetic to environmental in nature.

“The plan is to take this ordinance, and hopefully business owners will be there, and we’re going to go through what do you all need, what do you all want, and what are you all willing to give up to get the aesthetic that you want in town?” he said.

Common rules or guidelines that could be addressed in what Bowen called a “truly informal” public hearing include proximity rules similar to Haywood County’s impending high-impact development ordinance, as well as setbacks from the street and property lines.

“I’m going to set up a bunch of tables, get people to try to sit with people different than they came with,” said Bowen, adding that he’d illustrate the nuances and extremes of roadside sales ordinances in other municipalities so citizens could find a middle ground.

“I would say seven or eight people actively sell outside,” Bowen said. “I don’t think this is entirely going to harm their business, it’s just going to state more directly what those need to look like.”

Smith regularly places merchandise — 1950s bicycles, an old plow and even a rusting whiskey still – outside his shop at 3029 Soco Road; he says it’s the only way to get drivers speeding down Soco Road to notice him.

He said he’d heard about the ordinance from rental property owners who rely on him to source and sell eclectic yard décor for their rental properties, and that he’s gravely concerned about its impact, so much so that he’s contacted an appraisal company to value his collection in the event that a restrictive ordinance puts him out of business.

However, Jake Marzullo, a chainsaw artist with an extensive spread in the 1900 block of Soco Road, says he isn’t worried. He keeps his work — carvings, tabletops and chairs, mostly — well off the street.

But an expansive ordinance could end up affecting large outdoor operations like the one at Marzullo Chainsaw Art just as easily as at Smith’s antique business.

Bowen said it’s also possible that an ordinance presented to the Maggie Valley Town Board for approval could eliminate any “grandfathering” of existing businesses that end up afoul of the new ordinance.

As Maggie Valley embarks on this attempt to define that “product” Bowen says is crucial in selling the town’s image as a family-friendly destination, the outdoor sales ordinance is just a small piece of a larger puzzle.

“Right now, we’re going through every ordinance that has anything to do with land or building or development or construction. Nuisances. Environmental regulation,” he said. “We’re going to wrap all those into a very large unified development ordinance.”

The unified development ordinance will be a comprehensive collection of ordinances designed to make it easier for builders and business owners to consult a single source as they consider investing in the town. Currently, ordinances are a hodge podge of unrelated regulations in unrelated locations.

“It’s just hard to find stuff,” he said. “If you’re wanting to do a subdivision, you have a subdivision ordinance. And say that subdivision has some area that may be in a flood plain or a watershed. Then you have to go find that ordinance. The UDO is just one table of contents. You can sit down with one book and figure out anything you want to know about building a home or starting a business.”

The roadside sales ordinance is but one of 22 chapters Bowen’s been working through since last winter. He hopes to be done by May.

Once Bowen drafts the ordinance — with the help of the planning board and input from whoever shows up at the public hearing — he’ll take it formally to the town’s planning board. If they think it’s a good fit for the town, he said, they’ll put it up for formal adoption by the town board.

Once that’s accomplished, Bowen said, his next target for the UDO will be a nuisance ordinance, followed by a “massive” restructuring of every zoning district in town.

Currently Maggie Valley has three residential and two business districts, but a land use plan passed in 2007 calls for six residential, five mixed-use, and three commercial designations, which will make provisions and restrictions on everything from mulch yards to sexually oriented businesses.

“It has a big economic development component, because we have a lot of open parcels within town,” he said. “Maggie’s growing, we’re getting a few more businesses, and at some point, some business is going to move in and build on a new lot.”

A recent study by the Haywood County Affordable Housing Task force said that as the county’s rate of natural population increase is negative, attracting new residents and businesses to the area is crucial for further growth, and Bowen stressed the importance of getting everything down on paper so that there would be as little confusion as possible among those who might want to make Maggie Valley their new home, or their place of business.

“Another reason for the UDO is to take as much discretion from town officials as possible,” he said. “I don’t want it, and I don’t think anybody in the future or anybody presently wants a lot of discretion when it comes to saying, ‘Well how many old trucks are too many old trucks?’ So those things need to be written down and talked about.”

What about food trucks?

Another type of outdoor sales activity has generated controversy in some local municipalities, but Maggie Valley hasn’t directly addressed it yet; it may, however, come up in conversation as the town slogs through crafting its unified development ordinance.

“If you do not have an actual structure within town, you cannot set up anywhere or sell anything,” said Bowen, referring to food trucks.

Even if a restaurant has a building in town, he said, they couldn’t drive around town and sell food in Maggie Valley, even at the invitation of property owners or festival organizers.

“If it’s sold outdoors, it also has to be sold on the same premises indoors. Guayabito’s is a good example,” he said of the popular Soco Road Mexican eatery. “If they were to have a food truck and sold Mexican food inside and outside [in their own parking lot], our current ordinance I think would allow that,” Bowen said.

It would not, however, allow the eatery to ply their wares in hotel parking lots or outside bars, where hungry crowds often congregate.

Current policy likewise bans sidewalk sales of snacks like peanuts or candy, merchandise like sunglasses or even a children’s lemonade stand, if those vendors aren’t on their own property where such merchandise is already sold indoors.