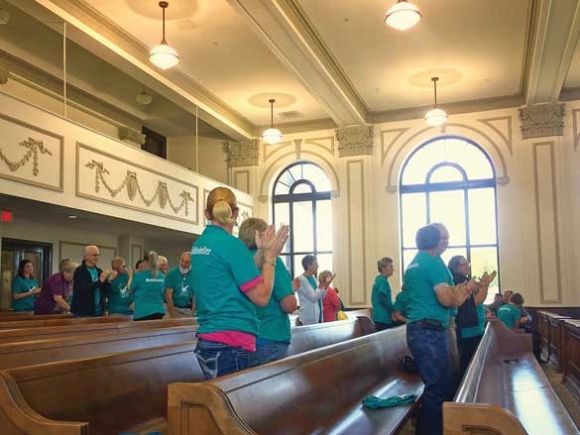 “We are 30 percent over capacity, and it is deafening,” Hammett said of the current animal shelter, which is overcrowded, is poorly equipped and has parking issues. “I had to euthanize two pets because we have no space.”

And with that, Hammett presented county finance director Julie Davis with a check for $175,700.

Commissioners Kirk Kirkpatrick and Mike Sorrells were ultimately unconvinced, both saying they recognized the need for the new facility but couldn’t stomach the cost.

Commissioner Kevin Ensley said that the community rightfully questioned the cost, but his research indicated it was reasonable.

Commissioner Bill Upton agreed with Ensley and seconded his motion, with Chairman Mark Swanger breaking the tie to approve the facility.

The vote put the new facility on track to open sometime next year, and prompting the teal-wearing animal lovers in the crowd to stand and applaud.

The rest of the money will come from whatever FHCAS can raise and accommodations made in the 2016-17 budget.

“This has been a four-year process,” said Connie Hewitt, a FHCAS supporter who stood outside the meeting handing out flyers. “I think it’s going to impress a lot of people. Hopefully we’ll become no-kill because we’ll have space, and hopefully it will make people want to adopt more.”

H&M Constructors will be the contractor for the shelter.