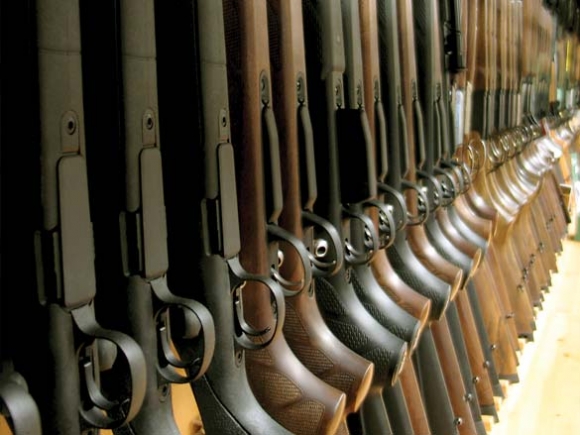 Haywood County political activists hope to hold a gun rights rally on the grounds of the Historic Haywood County Courthouse just days before the General Election in November.

“I think there’s been a gradual infringement upon a right that is not supposed to be infringed upon,” said Jess Dunlap, chair of the Haywood County Libertarian Party at a lightly attended Saturday morning meeting at Trailhead Bakery in downtown Waynesville.

Although the group hadn’t yet set a firm date, the protest could coincide with the Gem Capitol Waynesville Gun Show held at the Haywood County Fairgrounds Oct. 29-30 in order to appeal to both open carry and concealed carry advocates.

Alternatively, the group is considering holding the event on Nov. 5, which is commemorated in Britain as “Guy Fawkes Day.” Fawkes has become a countercultural symbol in the United States in recent years due to his role in a failed Catholic uprising intended to overthrow the Protestant King James.

Fawkes — who was hanged, drawn and quartered upon conviction in 1606 — gained newfound notoriety after the 2006 film “V for Vendetta” popularized a stylized mask of the mustachioed, goateed revolutionary that is now ubiquitous at protests nationwide.

“I think when you believe in something, you have to be willing to go to jail for it,” said Dunlap. “Other ways are easier ways — posting something on Facebook is easy, but it’s lazy. So I think that for something you believe in, you need to get your butt up off the couch and get outside.”

The protest, Dunlap said, is to be modeled after a 2014 event that has been called the largest felony civil disobedience rally in American history.

Activist Gavin Seim organized the “I Will Not Comply” demonstration in Olympia, Washington, to show disapproval for a recently passed Washington law that expanded background checks to gun buyers transferring or purchasing weapons in private exchanges.

According to the Washington State Patrol, around 1,000 protestors converged on the Capitol to buy, sell and transfer weapons, in some cases within mere feet of law enforcement officers. Protestors also burned their concealed carry permits. No arrests were made and no violence was reported.

Dunlap said that efforts were also being made to involve the Black Lives Matter movement, which has been active in Asheville and in July staged an overnight sit-in at the Asheville Police Department to protest the death of 35-year-old Jai Lateef Solveig Williams, who was shot by police after leading them on a chase and brandishing an assault rifle.

“I think there’s a lot of overlap between the Black Lives Matter movement and the Libertarian platform,” Dunlap said.

The group will continue to meet in the coming weeks until final arrangements for the demonstration have been made.