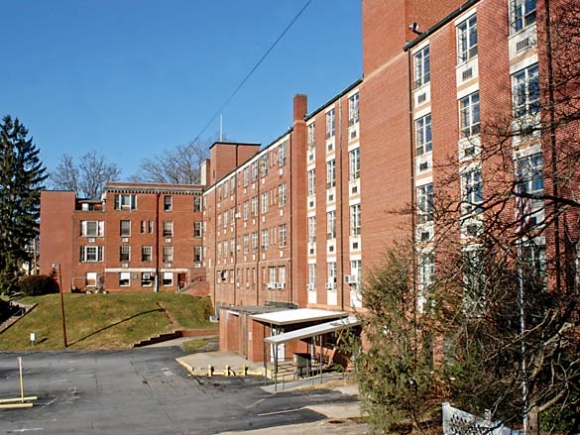 Despite a perfect score on its application, Haywood County was not awarded tax credits that would have helped developers turn the old county hospital into low-income housing units for the elderly, disabled and veterans.

Commission Chairman Mark Swanger told an audience assembled at the Haywood County Council of Governments meeting Aug. 22 that just one project in all of Western North Carolina was funded with the tax credits — in Charlotte.

“Charlotte is not west,” he said.

The county has been trying to sell the building since at least 2010. After a few previous attempts had failed, county officials were hopeful that this round of tax credits would help Winston-Salem-based Landmark Developers rehab the structure to meet badly-needed affordable housing goals locally.

The structure, which dates back to the 1920s, was North Carolina’s first public hospital. Expansion in the 1950s increased its footprint, but today it’s a hulking, dilapidated, outdated four-story brick millstone about the neck of the county, which continues to pay just to stop the building from completely deteriorating.

Landmark Developers was to pay the county $200,000 for the building; the county would then have loaned Landmark $450,000 over 30 years to assist with rehabilitation, realizing a $200,000 profit at that time, as well as a cost savings for maintenance, utilities, and repairs.

Currently, the Haywood County Board of Education uses portions of the building as office space. Officials were so optimistic that the tax credits would be awarded this year that it’s been alleged that the controversial closure of Central Elementary School was announced and expedited just so the school board’s central office would have somewhere to house employees upon their eviction from the soon-to-be repurposed hospital.

The board has always maintained that the closure of Central was strictly a budgetary move, but those allegations gained steam when board members were overheard on video discussing how to handle public perception of the school’s closing if the board did indeed take up residence in the former elementary school.

That incident led to a lawsuit filed by concerned parent and local attorney Mark Melrose, who alleges proper procedures weren’t followed during the closing process.

That, in turn, pushed Board Chairman Chuck Francis to stop recording the board’s work sessions. He cited remarks “taken out of context” in this instance as well as a previous incident several years ago as the reason for the decision.

But after considerable public discussion, Francis last week decided to reverse his controversial decision (see page 4), stating that he had “listened to the public” and taken full responsibility for what he called a “poor” choice.

The failure of the hospital once again to acquire the tax credits that would make rehabilitating the hospital economically feasible for developers now renders many of those issues moot; the board needn’t rush to find new digs, and may never move in to Central, regardless of whether or not that was their original plan.

One issue that remains on the table, however, is what to do with the building, which has generated little interest on the private market.

Swanger said he wasn’t overly optimistic that the building would qualify for the credits during the next grant cycle, sometime next year.