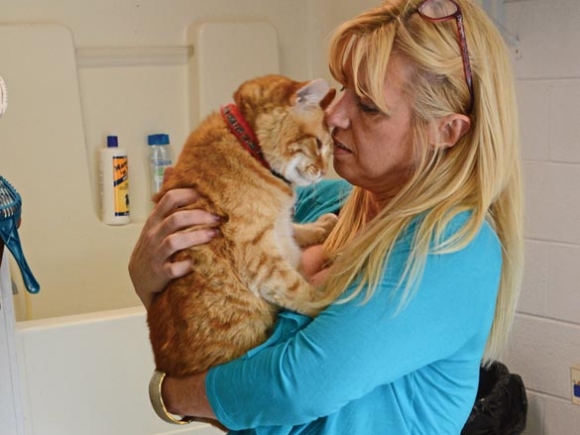 It’s been more than a year since the Swain County commissioners charged a newly formed ad hoc committee with tackling a longstanding controversial issue — the county’s lack of animal control.

Swain County is one of the last counties in the state that doesn’t have any rules on the books when it comes to regulating stray animals, nuisance animals, dangerous dogs, farm animals or animal cruelty.

The county also has no animal shelter to house stray animals, which puts an additional strain on its only nonprofit animal shelter, PAWS. Without a county ordinance, sheriff’s deputies have no jurisdiction to take action when a resident calls with an animal complaint. In 2014, the sheriff’s office received 201 animal-related calls.

The ad hoc committee, led by Commissioner Ben Bushyhead and committee Chairwoman Sybil Mann, has spent the last year trying to address these issues and finally presented a draft animal control ordinance to commissioners last week. Mann said this was an assignment the committee did not take lightly, and its members did their best to prevent any controversy by keeping the process very open to the public.

“We wanted to make this as open and inclusive of a process as we could with the community,” she said.

The committee held informational meetings throughout the county — Alarka, Almond, Whittier and Bryson City — to get feedback from residents. People from all different groups, including farmers, hunters, pet owners, the health department, law enforcement officers and PAWS of Bryson City, were also a part of the discussion.

Mann said the committee also received helpful information from County Manager Kevin King about the financial challenges of trying to construct and provide manpower for an animal shelter and advice from Doyle Teague, the animal services director for Haywood County. Even the fourth-grade class at Mountain Discovery Charter School weighed in with letters to advocate for an animal shelter in Swain County.

“We had a lot of lively discussions,” Mann said. “We didn’t want to adopt an ordinance from somewhere else — we need one specifically for Swain County — one that takes into account the importance we place on hunting rights and privacy rights.”

Mann said state statutes already addressed many people’s concerns, which made the committee’s job a little easier. After holding 10 public meetings, the committee drafted an ordinance before returning to those same communities to get their feedback on the working document. The committee made one more round of revisions before presenting the ordinance to the commissioners.

The committee identified five purposes for needing an animal control ordinance: to protect the public health, safety and welfare of residents; prevent the abuse, neglect and abandonment of pets; enforce regulations regarding the possession or harboring of dangerous dogs; protect the public and domestic animals from rabies; and educate the public about proper care of animals.

The proposed ordinance specifically excludes hunting dogs, service animals and farm animals because of all the concerns raised during the public input sessions.

The proposed ordinance will allow the county to enforce rabies vaccination requirements for domesticated animals. If a doctor treats someone for an animal bite and the offending animal is a potential rabies carrier, the doctor must notify the health department within 24 hours and an investigation will be opened. Any animal that shows signs of rabies or bites someone will be quarantined for 10 days at the cost of the animal’s owner.

If the county adopts the ordinance, it will be unlawful to keep a dangerous or potentially dangerous animal unless it is confined to a secure building or fully enclosed pen. A dangerous animal is defined as a dog that approaches people in a vicious manner, bites someone, kills or seriously injures another domestic animal or a dog owned primarily for dog fighting. The proposed ordinance outlines the process to determine whether a dog is dangerous and an appeal process for owners.

Owners could not allow an animal to be a repeat public nuisance. An Animal Services employee will review written nuisance animal complaints if they feel there is reasonable suspicion. If an investigation is warranted, the owner will be contacted and ordered to correct the nuisance within 48 hours.

Of course a large part of having an animal control ordinance is having the resources to pay for the enforcement. The proposed ordinance calls for the establishment of an animal services center staffed with county employees and supervised by a director, but says commissioners reserve the right to examine other options. Other options could include partnering with another county to house stray and nuisance animals or contracting with an outside company.

Jackson County is also looking at options for a new animal shelter, which could be an opportunity to share resources with Swain County.

Commissioners said they would review the proposed ordinance before their next meeting on Aug. 11. The ordinance will then be available for a 10-day public comment period and a public hearing will have to be held before the commissioners vote on it.

Highlights from the proposed ordinance

• Does not apply to hunting dogs, service dogs or livestock dogs.

• Farm animals are specifically excluded from the ordinance by state law.

• Nuisance animals are defined and procedures are established for reporting them.

• Controls for dangerous dogs and responding to dog bites are outlined.

• A community standard is established relating to the care and treatment of dogs and cats.

• Protections for property rights and privacy are included by requiring animal services officers to gain consent to come onto a landowner’s property or secure the appropriate legal authorization.

• While the personnel and operations of an animal services facility are included in the ordinance, the existence of a facility will depend on what funding, if any, is available to establish it.

• The ordinance sets out a series of graduated penalties for repeated behavior. First offense is a warning; second offense is $25; third offense is $50 and fourth offense is $100 or seizure of the animal.