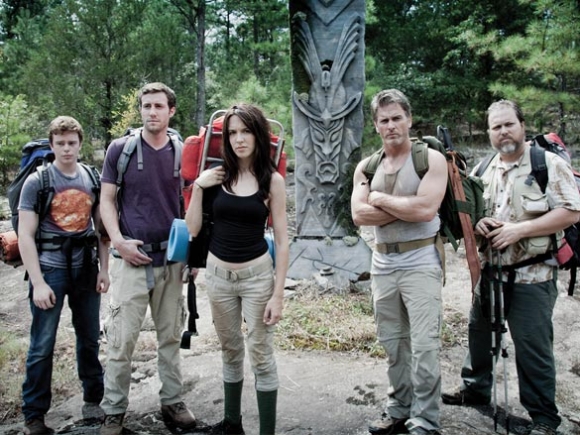 The presence of breathtaking topography, ancient native lore, and centuries of American history makes the Great Smoky Mountains a mystical, mysterious place as ominous and foreboding as it is inviting and encouraging.

These conflicting spirits also make the region a haven for filmmakers, including the cast and crew of the recently released, locally shot feature film “Beacon Point.”

Each of the four hikers in the group — Zoe (NYU-Tisch School alum Rae Olivier), Dan (improv teacher and screen vet Eric Goins), Brian (“October Baby” Jason Burkey), and Cheese (R.J. Shearer, “Paper Towns”) — are searching for something different, but end up finding strange and terrifying secrets deep within the Great Smoky Mountains National Park that none of them could have ever expected.

“The first move was — and a lot of filmmakers don’t do this — researching genre and audience,” said director and co-writer Eric Blue, who decided that for an indie filmmaker on a tight budget, a sci-fi thriller would be both marketable and creatively satisfying.

“The horror genre has traditionally been really good, but it’s so saturated that I wanted to do something a little different, but still play in that genre,” he said. Blue’s admiration for the genre dates back to his childhood, when “Star Wars” was released.

“It literally blew my mind,” he said.

As he set about making “Beacon Point,” the Atlanta-based Blue called upon a friend who is also a writer and executive with Warner Brothers Home Entertainment in Los Angeles.

“She loved the idea,” he said of co-writer Traci Carroll. “We began working on the script by Dropbox, Skype and email. We did it really quick, in like four months, which is fast in the screenwriting world.”

Carroll said that when she would think about the idea of writing partners, she always had a mental picture of sitting in a room, talking about ideas and then “banging them out” on an old-fashioned typewriter.

“But I also like to spend time just thinking about the story and characters, and really mulling that over,” she said. “So what was great about working via email and Dropbox is that I really had time to think about where I saw the story and characters going. At the same time, I’d be looking forward to reading a treatment or draft from Blue to see what he was thinking.”

When the script was completed, Blue created a business plan and went looking for funders.

“People really liked the screenplay, but I also had a body of work behind me to show, ‘Hey, this guy knows what he’s doing,’” said Blue, who attended film school at the University of Oregon and graduated with a degree in film and communications from Georgia State. Over the years, he’s done corporate work, music videos and short films, including the award-winning 2007 short Lost Crossing starring Melissa McBride — better known as Carol from “The Walking Dead.”

As soon as Blue had raised the money, which he admits took “a fair amount of time,” he brought on producers Scott Salomon and Matt Ackerman and began to work on logistics, including how and where to shoot, and casting.

“So much of making a movie is good casting,” Blue said. “About 95 percent is good story, good casting. With those elements, it’s kind of hard to screw it up. So we engaged a casting agency out of Atlanta, Big Picture Casting. They do a lot of the casting for the smaller parts of ‘Walking Dead,’ and ‘Vampire Diaries,’ and a lot of the big movies that come through town.”

Blue found some of the cast in Atlanta, but the talent for the important roles of Drake and Zoe — the group’s guide who is not as he seems and the young woman looking for closure with her deceased father, respectively — was found in L.A.

“Once we got it casted, it all started to come together,” he said.

The personal dynamics between the characters move the story along, creating a tightly wound, tense and relatable tale that utilizes a realistic delivery method — for who hasn’t been terrified and lost on a trail or even in an urban metropolis? — that owes much of its believability to a backwoods experience Blue once had.

“That experience really left a mark on me,” he said of the night he and his wife, asleep in their tents, heard something prowling about the immediate vicinity. “There’s a fear and an unknown in the woods at night, and it’s surprising how scary it can be, especially for a guy who’s pretty confident outdoors — I’m fairly athletic and I’m not afraid of anything, but the fear that grabbed hold of me that night was unexplainable. It really rattled me. If something had happened, we were 20 miles away from help. That’s the catalyst of where ‘Beacon Point’ came from, because as a writer, it’s best to write about things you know. It’s best to write scary stuff about stuff that scares you.”

Blue’s woodland terrors found a welcome home in the enigmatic Great Smoky Mountains National Park, where both the story and much of the shooting took place.

“That was all up at Clingman’s Dome, literally right on the Appalachian Trail,” he said. “Some of the scenes are shot right on the A.T., and if you look, you’ll see some of the A.T. trail markers.”

The movie culminates in a scene with Zoe atop the iconic Clingman’s Dome Observation Deck.

“In order to get the scene on the observation deck, we obviously didn’t want lots of people walking around — it’s much more powerful just to have her out there by herself,” said Blue. “So we got up there at 3 in the morning, so that the minute the sun popped up over the horizon, we could roll.”

About half an hour after that scene with Zoe was shot, clouds rolled in, obscuring the sun and producing an ethereal mist in the immediate vicinity.

“The scene where, after she’s lost her pack and she’s alone and she’s walking through the trees, and there’s that beautiful fogginess — that was shot at 7 in the morning right there by Clingman’s Dome,” said Blue. “So that worked out perfect. We got our ‘sunset’ shots, which were gorgeous, then this came in and then we got all our creepy shots. It was excellent.”

“Once we did that, I decided I wanted to release the movie to the people that are in the part of the country where the movie takes place, where we shot it,” Blue said. “Before we released it, I reached out to Vice Chief Snead of the Cherokee, because we put a lot of effort into not offending anybody in the region. We tried to be very respectful of the land and the heritage, and since we put out some Cherokee legends in the movie, I just wanted to be sure that before we released it, there wasn’t anything improper in it.”

Blue said Snead loved it; accordingly, the local premiers will take place Friday, Aug. 12, in Pigeon Forge, Tennessee, and on Saturday, Aug. 13, at the Cherokee Phoenix Theatre in Cherokee. After that, the film goes to New York, back to Los Angeles, then Atlanta, and then Houston.

Blue also spoke of a pending deal to show the film in a very appropriate type of venue — drive-in theaters — before moving on down a now-familiar distribution trail of video on demand, DVD, cable and international distribution.

“The movie turned out amazing, and we’re already looking at making another one,” Blue said.