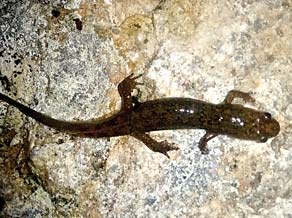 Give a Loosiana boy a reason to don his hip boots and strap on a headlight and you’ve got a happy camper. I recently got that opportunity through a contract with the Forest Service to do a salamander survey on three streams in the Cheoah District of the Nantahala National Forest. The three small headwater streams were Wolf Laurel, Sand Creek and Whiggs Branch.

Standing in the dark, in the water with my entire field of vision reduced to a yellow beam ending in a somewhat luminescent glow kinda opened the nostalgia ports. I could remember being a teenager standing in the water scanning the shallows of Felton Brake or Sucker Pond for the red/orange glow of bullfrog eyes; or later, in college, scanning the marshes around Rockefeller Refuge in Cameron Parish for larger red gator eyes.

But there were no glowing eyes to look for here and the scanning was primarily within a five- or six-foot circle in search of good rocks to turn at the water’s edge plus keeping an eye out for salamanders on the prowl that had left their daytime burrows for the moist night air. And while there were no gators nor cottonmouths to worry about and no mosquitoes biting nor buzzing nor flying into my eyes, ears and mouth (as a teenager, hunting frogs in Louisiana, I used to puff away on a Roi-Tan falcon all night — I never inhaled but the blue plume of cigar smoke kept the mosquitoes from around my head) each stream had its own particular set of challenges.

Wolf Laurel may have been the easiest to navigate, at least as far downstream as I went. It got to the point where it was just falling over boulders, with not much footing and hardly anyplace to look for salamanders. But it was pretty easy to navigate going back upstream from my starting point. I recorded a good number of salamanders in Wolf Laurel — most were black-bellied, Desmognathus quadramaculatus, which was the most common salamander in all three streams. I saw more brook trout in Wolf Laurel than in the other two streams and the first night I was there I saw five or six crayfish, which conveniently disappeared after I told Steve Fraley, fisheries biologist with North Carolina Wildlife Resources Commission, and promised to collect some for him — can you say Murphy’s Law?

Sand Creek was the toughest go. Heading downstream from the starting point, it was only a matter of meters before one was in a narrow, ditch-sized stream with rhododendron branches stretching from bank to bank. Upstream was a little better but it was clogged with several treefalls that one had to climb through or over or find a way to get around — not an easy task in the dark with no marked trails around. It may have been a function of the terrain but I found the fewest salamanders along Sand Creek. Water levels seemed low and that probably didn’t help as I was searching for more aquatic salamanders and didn’t venture out of the streambed.

Whigg Branch was my favorite stream. It was larger, deeper and a little easier to navigate. The first night I surveyed Whigg was just after a rain and I found several salamanders perched on boulders in the stream. I stopped at one point and sat down on a large boulder to ID a couple I had just caught, and as I was looking at them and referring to a field guide something caught my attention. I turned my headlight to see sitting next to me on the boulder — a good two feet from the water — a Blue Ridge two-lined salamander, Eurycea wilderae, glowing golden in the spotlight.

Sure, it was about salamanders, but the last night I was out the waxing gibbous moon was illuminating the forest. I heard a great horned owl as I was suiting up for the first creek and then a barred owl a few minutes later. As I was rounding a curve in my auto headed to the next stream I encountered a road full of wild piglets bounding stiff-legged after mama, who had already disappeared into the woods.

So it wasn’t all about salamanders. It was about wild places and moonlight; about nostalgia and remembering other wild places and being grateful for our public lands and hoping wild places remain wild in perpetuity.