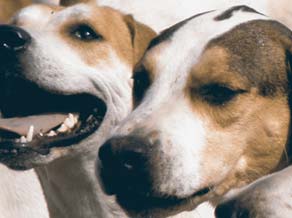 Bear hunters on the Qualla Boundary may be able to run their dogs through tribal reserve land for a full half year following contentious discussion and a divided vote in Cherokee Tribal Council this month.

Hunters are already allowed to train their dogs off-leash from July 23 to Aug. 23, right before the Sept. 1 to Dec. 31 hunting season, but the hunting community could use a longer window to get their hounds in tip-top shape before the season opens, said tribal member Slick Saunooke, who first presented the legislation in April. Tribal Council passed legislation in July to lengthen the training season to last June 1 to Aug. 23.

“With the drug epidemic that we’ve got, if we can provide something else for our young men and our young girls, I think that’s something we should do, give them an extra month to run their dogs,” said Councilmember Alan “B” Ensley, of Yellowhill, in this month’s council session.

However, the proposal found vocal opposition from some members of council and the audience, especially from Councilmember Teresa McCoy, of Big Cove.

It’s too early to make any decision on the legislation, McCoy said, because there are still too many unknowns. How many bears currently live on the reserve land? How many are already harvested each year? How, she asked, might the extra months of dog training impact other parts of the ecosystem? And what about disturbances to tribal members who don’t like to hear dogs barking and bounding through the woods?

“We have a fish and game program, we have natural resources, we have all these people who can bring you information to better make a decision as to whether to have a bunch of dogs run through the reserve land,” McCoy said. “I think we need to table this and set up a time to discuss it.”

It wasn’t the first time McCoy had made that suggestion. When the legislation was originally discussed in April, the conversation ended with a vote to table it for a few months, giving the tribe’s Timber and Natural Resources Committee a chance to discuss the issue and its biologists a chance to offer feedback.

“Chief (Patrick Lambert) has made a tremendous effort to work with (Great Smoky Mountains National Park) Superintendent Cash to allow some conversations and dialogue,” Tommy Cabe, the tribe’s forest resource specialist, told council in April. “We look forward to continuing this work. Decisions like this could sabotage those intentions.”

However, in the interval between April and July the committee didn’t deliver the cohesive feedback on the legislation that council had requested, Chairman Bill Taylor said.

According to Jeremy Hyatt, natural resources and construction manager for the tribe, there was good reason for that. The timber committee had discussed the dog training legislation but stumbled upon such a large number of inconsistencies in the part of tribal code dealing with environmental and resource issues that discussing dog training seasons specifically seemed like a waste of time until the larger structural issues could be addressed.

“Instead of making these decisions piecemeal, there are inconsistencies throughout the code regarding environmental issues, hunting issues, so I asked my team to put together a comprehensive rewrite,” Hyatt told council.

Councilmember Adam Wachacha, of Snowbird, said it would make sense to keep the legislation tabled, especially considering the fact that the dates for the proposed extended dog running season are mostly over for the year. Passing the legislation at the July 7 council meeting would give hunters only 16 extra days of hunting, and that’s assuming that Principal Chief Patrick Lambert signs the legislation immediately after its passage. Depending when and if he chooses to sign it, the dog-running season currently in effect could already be underway.

“We’ve already passed the date,” Wachacha said. “In reality if we have that many problems with the hunting ordinance, I think we should put it on hold until we can revamp everything.”

Lambert did not weigh in on the issue in council, but Vice Chief Richie Sneed spoke in firm opposition to any kind of up-or-down vote that day, arguing that the legislation should be tabled to allow time for more information gathering.

“We have a duty and a responsibility to see that the resources are preserved for everyone’s use, and I think it’s irresponsible if this is going to be a yes or no vote on this particular piece of legislation,” Sneed said. “I don’t vote, but I say it should be no until we have this discussion.”

Other councilmembers averred that the extended dog-running period is not a hunting season, so changing the dates shouldn’t be that big a deal.

“This is not a killing season. It’s just to run your dogs,” said Councilmember Albert Rose, of Birdtown. “That’s all it is.”

On state and federal game lands in North Carolina, dog running is allowed Aug. 16 to March 14, though hunting is allowed only Oct. 17-Nov. 19 and Dec. 12-Jan. 2 — on private land, dog training is allowed year-round. The actual hunting season in Cherokee is much longer than the seven weeks allowed in the state, running Sept. 1 to Dec. 31. But by contrast, the month-long dog running season that has been in place on the Qualla Boundary is substantially shorter than the five months outside bear season that North Carolina hunters have to run their dogs.

However, the extended season dates in Cherokee would allow dog training to take place in the spring and summer before the hunting season opens, when bears and their young are active. North Carolina rules allow training to begin in mid-August before bear season but demand that the rest of the training take place during the winter months, when bears are less active.

But even if the ordinance proves to be imperfect or conflicts with some aspect of a larger overhaul of the hunting code, it would be easy enough for council to make changes, said Councilmember Bo Crowe, of Wolfetown. And because this year’s dates are past, they’ve got a whole year to do it.

“Why go through the process of putting something in here that may be coming out?” McCoy countered.

McCoy was also skeptical that the running season would, in fact, be free of kills.

The 5,200-acre reserve land is open to tribal members for a variety of uses, including hunting, fishing and gathering. Tribal enrollment cards double as hunting licenses, and no tags are required to shoot bear. While tribal code limits each individual to two bears per season, there’s no requirement that hunters register their kills.

Mike LaVoie, program manager for fisheries and wildlife management, told council that only three bear kills were registered during the 2014 season, the last year for which data has been compiled.

McCoy wasn’t alone in her opposition to the legislation’s passage.

“We need to be careful and make sure we’re conserving and sustaining our wildlife for future generations,” said Councilmember Anita Lossiah, of Yellowhill, seconding McCoy’s move to table.

The vote wound up being a close one, with seven members voting to table and five voting to pass the ordinance. However, due to the weighted voting system council uses — each member’s vote is worth a different amount based on the population of the area they represent — those in favor of passage won out. The move to table drew 45 weighted votes and the move to pass drew 55.