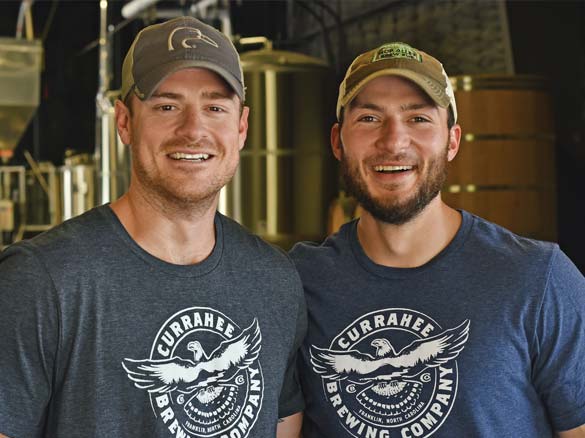 Taking a right off East Main Street, just before crossing the bridge into downtown Franklin, you pull onto Lakeside Drive and keep your eyes peeled. You know Currahee Brewing is somewhere around here, but where? It must be behind that large warehouse sitting alongside the Little Tennessee River.

And it’s just in that moment you realize Currahee is the large warehouse looming over you.

“We want to be professional, all while putting out a quality product in a comfortable environment,” said J.T. Schroeder. “If you’re doing anything, you do it right the first time — you can’t have a first impression twice.”

Co-owner of Currahee, Schroeder and his business partner Brandon Hintz are sitting at one of the taproom’s long tables. A slight breeze floats up from the Little Tennessee, a welcomed feeling on another sizzling day outside in Western North Carolina. The newly constructed 10,000-square-foot building has been a year and a half in the making, with all of the construction and brewery plans for the 2.5-acre property coming to fruition with their soft opening this past weekend.

“It all hit me last night,” Hintz said. “J.T. and I were sitting on the back patio, sipping a pint from our first batch of craft beer. I turned to him and said, ‘this is it, this is it.’”

Touring the massive structure, one is impressed by the brand new 15-barrel system (with four 30-barrel fermenters and three 30-barrel brite tanks). The space is a laboratory of creativity and flavor for Hintz and Schroeder, with their “mad scientist” brewmaster Taylor Yates (formerly of Moon River Brewing in Savannah) holding steady at the helm. While most of the Southern Appalachian breweries tend to be “hop heavy” and “West Coast” oriented in taste, Currahee wants to focus more on old European styles, as lagers, pilsners and barrel-aged selections will find their way into the hands of the consumer.

“You can make real hoppy IPA (India Pale Ale) and be able to hide a lot of flaws, but you can’t hide behind the flaws in a pilsner,” Hintz said. “My passion is in barrel-aged beers, where you can really play with the woods from these bourbon barrels (obtained by Buffalo Trace Distillery in Frankfort, Kentucky). Craft brewing is an art form, and these European styles are some of the oldest techniques used to brew.”

Hintz comes from a longtime passion for craft beer. Originally from Marietta, Georgia, his father-in-law has run The Wing Café & Tap House for over two decades. Initially, Hintz worked in construction, and following the market downturn in 2008, he joined the Army Corps of Engineers in Iowa. There was a brewery near the base, with Hintz befriending the company where his love for craft beer and knowledge of engineering helped the business expand. After relocating to Georgia, Hintz found work as a brewer at the highly successful SweetWater Brewing in Atlanta, only to then go out on his own and open the Hop Alley Brew Pub in Alpharetta, an endeavor he still runs from his new digs in Macon County.

“We felt this town was the right place for Currahee because of its proximity to a lot of major markets like Atlanta, Athens, Charlotte, Greenville, Chattanooga and Knoxville,” Hintz said. “I also have a house here, and it all just felt comfortable right from the start of making the decision to launch this idea in Franklin.”

Hailing from Atlanta (via central Florida), Schroeder got bitten by the craft beer bug through his longtime friendship with Hintz. Working in the investment banking industry, Schroeder is the “numbers guy,” where he focuses more on the backend of the company, figuring out what works and what doesn’t — a talent as vital and similar to those concocting the barrels of craft beer.

“I’m on the administration side of things, while Brandon is all about the product,” Schroeder said. “We’re the perfect ying and yang of getting this business off the ground.”

When asked about the company’s namesake, Schroeder noted that “Currahee” — Cherokee for “stand alone” — came from Currahee Mountain in northern Georgia. The peak was depicted in the premier episode of the storied World War II television series “Band of Brothers,” where Easy Company (506th Parachute Infantry Regiment, 101st Airborne Division) trained at Camp Tocca, going up and down Currahee amid the rest of their U.S. Army training. If that wasn’t enough, Hintz’s brother is also an Army Ranger, one who also served in the 101st Airborne Division.

“Naming the brewery ‘Currahee’ is to not only honor all those who fought, but also all who serve in the military — they are the real heroes,” Schroeder said.

With a “Grand Opening” aimed for Aug. 20, plans are in the works to add live music and a food component, which will be the folks at Mountain Fresh in Highlands. The doors are now open at Currahee, and the craft beer is flowing. The brewery is another big piece to an ever-growing puzzle that Franklin and greater Macon County have been putting together in this new and exciting era for the community and its residents.

“If nothing more, it’s fun — it’s a lifestyle business,” Hintz said. “If you’re not enjoying what you’re doing, then why are you doing it?”