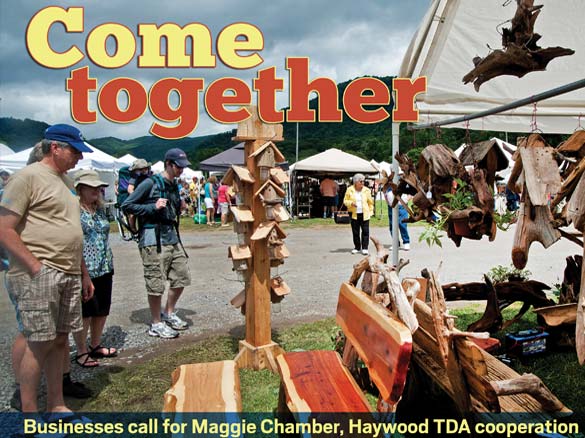 If a rising tide lifts all boats, it only makes sense for organizations with common goals to work together, but cooperation hasn’t always come so easy for the Maggie Valley Chamber of Commerce and the Haywood County Tourism Development Authority.

SEE ALSO:
• Three seats open on Maggie Chamber board
• The value of a Maggie chamber membership

Though both entities work toward the ultimate goal of promoting local tourism, arguments have surfaced throughout the years over funding and duplicating services.

The Maggie chamber formed during a time when Maggie Valley’s name recognition far surpassed Waynesville, Canton or Haywood County as a whole. But now that there are countywide organizations with the financial means to market Haywood County tourism and businesses, some have questioned whether the small Maggie Valley operation is still relevant or if it just duplicates what the TDA and the Haywood County Chamber are doing.

Maggie Valley Chamber Board Chairman Joe Moody said the chamber still provides essential services to the business community. In his opinion, there is plenty of room for the chamber and the TDA to do their respective jobs.

“My goal is to get people to work together more than we do,” he said. “The Haywood chamber and the TDA are all after the same thing — we all have a similar purpose, but we all have our own purposes as well.”

Lynn Collins, executive director of the TDA and former director of the Maggie Valley chamber, agreed that all the organizations have a slightly different focus but share the goal of improving Haywood County’s economy. While the TDA is looking at the big picture, Maggie Valley has a more narrowed focus on the town.

Now that the TDA has relocated its visitor center from downtown Waynesville to Maggie Valley, the two organizations need to find a way to co-exist more closely than ever.

There have been several organized efforts throughout the years to develop more collaboration between the Maggie chamber, TDA and even the Haywood County Chamber of Commerce, but they always seem to get derailed for one reason or another.

Back when she was still working for the Maggie chamber, Collins remembers an effort in 2005 to get all the organizations to create a more cohesive countywide effort for the future. A committee was formed and work was being done, but nothing ever materialized.

“There was a move by community leaders who were in the process of trying to bring everybody together,” she said. “We had a pretty detailed outline of how it would work and everyone seemed to be on board with it, but then it just fizzled out. We’ve tried numerous times but circumstances haven’t allowed it to happen — I can’t remember any one thing that stopped it though.”

Since that time, other circumstances have created more tension between the Maggie Valley chamber and the TDA, and discontent within the Maggie chamber has resulted in many Maggie Valley businesses threatening to abandon their chamber memberships if the chamber board doesn’t start making some changes.

The Maggie business community is even more splintered by other membership-based organizations — the Maggie Valley Area Lodging Association and the Haywood County Hotel/Motel Association.

The chamber, lodging association and the hotel/motel association are all member-based organizations working to promote Maggie and its business members, but they all operate separate websites — maggievalley.org, visitmaggie.com and maggievalleyhospitalityplus.com, respectively.

Until three years ago, all three groups were competing for the same pot of occupancy tax funding through the TDA to fund advertisement campaigns for Maggie Valley. Instead of the TDA doling out small amounts to each group to keep them all appeased, the three groups finally decided to join forces and resources for co-op advertisements.

Those advertising dollars are now going much further and Maggie Valley has a more cohesive marketing message. And since all the ads are directed to www.visitmaggievalleync.com, it’s easier for the groups to quantify the effectiveness of the advertising campaigns, and all leads can be filtered to the right people. The co-op spent about $55,000 in 2014-15, which the TDA increased to $77,000 for 2016-17.

Collins said the collaboration has definitely paid off — the 1 percent occupancy tax collection from the Maggie Valley zip code generated more than $200,000 in 2015.

While the TDA board granted the co-op more funding this year, the board rejected Maggie Valley Chamber’s request for $14,000 even though the TDA’s 1 percent subcommittee in Maggie Valley recommended approval to the board.

The TDA board members say they had plenty of good reasons for not approving the request, but Maggie chamber supporters feel like it’s another petty political snub to the chamber.

Collins said the TDA board informed the chamber last year that it would no longer grant funding to the chamber to go toward a salary supplement for Teresa Smith, the Maggie chamber’s director. The TDA had provided the supplement since 2012, when Smith took the director’s job and the TDA approved $15,000 to go toward her salary. For the last few years, the TDA has been funding $8,000 a year for Smith’s salary.

When Smith made her request for TDA funding this year, she asked for $14,000 to help supplement the cost of producing the chamber’s annual visitor guide. She was disappointed when it was denied.

“I think they were just trying to figure out a way to get that money for the chamber and didn’t work out,” Lowe said.

But that’s not the only reason the chamber didn’t get funding for the visitor guide. The TDA also produces a countywide visitor guide that is distributed to welcome centers and chambers all over the state.

Collins said the TDA printed 75,000 copies of the guide last year and is upping that to 100,000 this year to keep up with demand. Everyone is allowed to advertise in the guide, while only members can advertise in the chamber’s guide.

Lowe said funding the chamber’s visitor guide wouldn’t be fair to businesses that aren’t chamber members and it would also be a duplication of the TDA’s visitor guide.

“The TDA has gotten a lot of pushback and complaints from other businesses that don’t understand why we would be funding chamber salaries when they’re the ones producing the (occupancy tax) money at their front desk,” Lowe said.

The denial of the chamber’s request also came down to having a limited amount of money and more funding requests than ever. Collins said the TDA was able to fulfill 43 percent of the funding requests Maggie Valley made for 2016-17. As more grant requests pour in, the TDA board has to set higher criteria for awarding the money.

“What it boils down to with the 1 percent funding from Maggie Valley is there’s never enough money,” Lowe said. “Every year we’re bringing in more money and every year it’s dwarfed by the number of requests.”

But Lowe said the TDA’s decision was not a personal attack on the chamber. In fact, the TDA board ultimately approved two out of three of the chamber’s funding requests, contributing toward the Miss Maggie program and the WNC BBQ Festival.

Without the TDA funding, the chamber was without office space. The town allowed Smith to move her office into town hall until the chamber could find a proper office, which it did last year in the shopping plaza next to Premier Vacation Rentals.

From January through May, the chamber office has had more than 750 walk-in visitors. Now that the TDA’s Haywood County Visitor Center recently moved to Maggie Valley, Moody hopes visitor traffic will slow down at the chamber and Smith can concentrate more on chamber duties, such as sending out newsletters and leads, planning ribbon-cutting ceremonies for businesses and planning events.

Collins said she attended a Maggie chamber board meeting not long after the TDA opened its new visitor center and expressed interest in putting aside past grudges and moving forward in harmony.

“The ball’s in their court,” she said.