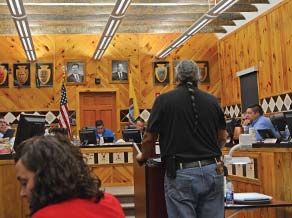 Cherokee Tribal Council is closer to finalizing a decision to revoke part of a former vice chief’s will, following its July meeting last week.

Bill Ledford, who served four terms on Tribal Council and was Vice Chief from 1987-1991 and 1995-1999, was married to April Ledford for nearly 16 years before his death in October 2013, at the age of 82. April Ledford isn’t a member of the Eastern Band of Cherokee Indians, however, so Bill Ledford couldn’t permanently will his property to her. He could, however, leave her a life estate — an allowance that gives non-enrolled relatives of deceased tribal members the right to inhabit and retain property left to them until the end of their life.

That’s just what he did. The last will he wrote before he died left April Ledford a life estate for his home and property. That will was accepted as legal by courts in both Cherokee and Orange County — the county where he died — but in May Tribal Council voted to add an amendment that would strike the portion of the document leaving the life estate.

“When council passed the amendment to the original resolution, they did remove the life estate provision that Mr. Ledford had made in his will for his widow April Ledford,” Jennifer Bainbridge, an attorney for the Eastern Band, told council. “You effectively are nullifying that term in the will.”

When a person dies, the will is examined by the courts to determine if it was done legally and if the person was of sound mind while writing it. However, on the Qualla Boundary wills are also subject to approval by Tribal Council. Leaving property on tribal land brings up issues that aren’t at play elsewhere, such as the recipient’s tribal membership status, and council has final say over whether a will is upheld or not. However, it is unusual for council to amend or nullify a will that has been approved by the courts.

The original amendment, added when council first considered the will in May, came at the request of Bill Ledford’s daughter Katina Price. Price contended that the will did not reflect her father’s true wishes and that the house had gone far enough “downhill” in the years since his passing to prove that April Ledford shouldn’t hold the land.

“I think we need to go ahead and make sure that her life estate is revoked,” Councilmember Teresa McCoy, of Big Cove, had declared in response. She’d moved to amend the legislation to strip out the life estate, and the move passed.

Ultimately, though, the will approval was tabled in the May meeting, and in June council considered it once again. But after hearing from family members who were upset that Bill Ledford had been cremated — they contended the decision went against his wishes and tribal tradition — council opted to table it once more to give the family the chance to consider legal action surrounding the cremation.

Bill Ledford’s will made it to the council floor for the third month running July 7, and this time Price was not the only Ledford offspring to address council.

William Ledford, Bill Ledford’s oldest son, had traveled all the way from his home in Albuquerque, New Mexico, to deliver a few brief comments on the issue.

“I came here hoping to put an end to the questions that are going on,” William Ledford said. “I would like to see my father’s wishes respected.”

William Ledford said in an interview that he doesn’t have any personal beef with April Ledford and saw that she made his father happy. His main concern, he said, is seeing that his father’s last wishes are upheld.

To that end, he said, even if council strips April Ledford’s life estate from the will, he’ll ensure she still gets to live in the home. As the oldest child, the property would go to him if it’s taken from April Ledford, and he’s committed to letting her live there regardless.

“I wanted to make sure daddy’s wife was taken care of,” he said.

As to cremation, he told council, that’s an idea that came from him. He and his father talked to each other regularly, discussing all sorts of things, and at some point he’d told his father about his thoughts on cremation, why it would be a meaningful way for one’s memory to be honored.

“It was him doing it because he liked the way I thought,” William Ledford said.

“My dad’s will spelled out exactly what he wanted, where he wanted to be buried,” Mike Ledford said. “When he was cremated, that went against his will.”

April Ledford, meanwhile, said that her husband’s ashes were buried on the very hill he’d wanted them put to rest.

“That’s where he wanted to be buried,” she said. “We both discussed it.”

“I know what he originally wanted, and it had nothing to do with any of this,” Price agreed. “He didn’t want his children to be fighting, I know that, but he also didn’t want any of this.”

The fate of the house, in particular, falls in the category of things her father didn’t want, Price said. That was the home she grew up in, and her father had intended for it to be hers when he passed, not April’s, she told council.

Neither Price nor April Ledford make it any secret that they dislike and distrust each other. Price, who at 43 is just a few years younger than April Ledford, who is 48, says that April Ledford used her father and divided the family. April Ledford, meanwhile, maintains that she loved her husband dearly, threw herself into caring for him in his illness and has been threatened and mistreated by his family.

Price and Mike Ledford’s view of the situation held sway with the majority of council. But not without some outspoken voices of opposition.

“I could go out these doors today and not make it home, but I beg you not to sit here and pretend that you might know what my last wishes were,” said Councilmember Brandon Jones, of Snowbird. “If I took the time to sit down and write down my wishes and go through that process, please don’t sit here and change my will.”

“I agree with you. I don’t like to mess with anyone’s will, and when my will comes in here you better not say, ‘She didn’t want this; she wanted that,’” concurred Councilmember Tommye Saunooke, of Painttown. “That really concerns me that this body did not respect his wishes.”

These are emotional issues, Jones allowed, and it can get even harder when the decisions involve people with whom one is close in the community. But emotion shouldn’t be in the driver’s seat.

“I mean no disrespect to the family, I truly don’t. I can see the hurt in the family,” Jones said. “What I’m trying to do is to take the emotion out of it, and I’m trying to look at these wills not necessarily on a case-by-case basis, which is what I feel like council is attempting to do sometimes.”

Saunooke moved to strike the amendment added in May to remove April Ledford’s life estate, seconded by Jones. But Councilmember Adam Wachacha, of Snowbird, was the only one to join the two in support.

Other councilmembers, meanwhile, supported tabling the will approval for the third time to give the part of the family opposed to April Ledford’s life estate more time to formally contest the will — a will contest is called a caveat.

The family’s request was “to withdraw or table this until they got their caveat in place,” said Councilmember Travis Smith, of Birdtown.

“The family’s here. Is that your request?” said Saunooke, addressing the row of Ledfords in the audience.

This is the last time council can table the decision. Next month the body will have to either vote on the resolution or withdraw it to be resubmitted later. Anybody wanting to contest the will has to do so within three years of the date the will was filed — in this case, the deadline would fall in October of this year.