Giving up the Ghost: Last respects at Ghost Town in the Sky 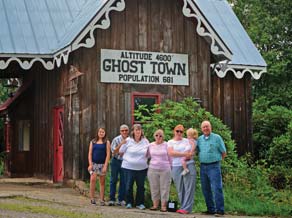 Mike Withers loved Ghost Town in the Sky so much that in Spring 2015 at the age of 72, he still held out hope that the troubled amusement park would reopen for the summer.

It didn’t, it hasn’t, and it may never again.

“My parents and us, we’d all come up here as kids and go to Ghost Town,” said Withers’ sister Libby Wilder, who drove two hours to Maggie Valley on a steamy summer Saturday from Spartanburg, South Carolina

With Libby were her husband Bobby, daughter Mary, granddaughter Grace, and, of course, Mike Withers.

“He had cancer a number of years ago, and never did get over it,” she said. “We talked about bringing him back up here. It was just something he asked us to do.”

Ghost Town in the Sky opened on top of Buck Mountain in spring 1961, drawing as many as 600,000 visitors each year. The miniature railway that still rings the Wild West-themed park offers a stunning view of the carnival rides and the rollicking main street, where performers would stage shootouts and saloon-style song-and-dance numbers, cast against the backdrop of some of Southern Appalachia’s highest peaks.

But the locomotive now sits rusting on the tracks near the entrance, where a sign on a building reads “Ghost Town, Altitude 4,600, Pop. 681.”

It hasn’t hauled customers in some time, and the Western-themed amusement park hasn’t drawn record numbers in quite a few years. In 2010, after almost a decade of mismanagement, mechanical issues and a major landslide, it began to open only sporadically, and then not at all as it became the subject of sales, bankruptcy proceedings and an auction.

The park’s closure left a tremendous void in the local economy as well as in the hearts of millions — like Mike Withers — who had visited it over the years.

Today, its uncertain fate leaves them only locked gates.

“I had been trying for over a year to get this coordinated, and everywhere I would go I would run in to a roadblock,” Wilder said. “Finally it just occurred to me to call the local chamber of commerce. I guess this was about two weeks ago. I talked to a sweet lady there.”

That sweet lady was Teresa Smith, executive director of the Maggie Valley Chamber of Commerce.

“It was an unusual phone call, I will say that,” said Smith, who admitted that she had to get creative to make a connection between Wilder and elusive Ghost Town owner Alaska Presley.

The result of that creative connection was that Wilder was able to make contact with one of the property’s caretakers, who said he’d be happy to take her and her family up into the park.

“I’m just thankful to God that he let us come up here and do that,” Wilder said.

In the years after his battle with cancer, Mike Withers’ health deteriorated; he became legally blind and nearly deaf, as the attractions at Ghost Town remained darkened and silent.

Tina and Mike Walker, Withers’ best friends, also made the trip to Maggie Valley from Gastonia with their out-of-state niece in tow to accompany Withers on his return to Ghost Town.

Libby Wilder wasn’t surprised to see them turn up.

Mike Withers passed away on July 9, 2015, without having made it back to the park.

“I think he finally just gave up,” said Wilder. “He just got tired of fighting.”

But Withers made it known that when he passed, he didn’t want a church service, or a marker, or even a burial.

“He wanted to be cremated,” Wilder said. “He’s been sitting on a shelf at my house with a picture of him in front of it, but he wanted his remains to be scattered at Ghost Town.”

As the Wilders and the Walkers wound their way up the mountain with Withers’ remains in the trunk — contained in a gallon-sized plastic bag, itself contained in a rectangular black box — downed limbs dotted the roadway, evidence of strong storms the night before.

The park, however, remains well-kept — banishing notions of a classic Scooby Do episode unfolding.

Other than some weedy overgrowth in places — and the weathering of some of the rides — it appears as though Ghost Town could reopen tomorrow, if not as an amusement park then as a movie set or wedding venue, or, as some locals openly wish for, a Dollywood property, or a Ritz-Carlton.

In particular, the buildings that adorn Ghost Town Main Street look as good as ever, as Presley was planning to have the rebranded Ghost Town Appalachian Village open this summer. However, she announced last month that the park wouldn’t open due to insurmountable issues getting potable water pumped up the mountain and extensive repairs needed to the chairlift.

Libby Wilder carried her brother’s remains past Cliffhanger Depot and the Festival Commons and turned left down the middle of that street, where businesses like the Long Horn Hotel, Olde Tyme Photos and the lawyer’s office (“Dewey, Cheatem, and Howe”) look as ready to entertain as they have for decades.

Wilder paused when she reached the end of the street, appropriately in front of the Frontier Community Church, which overlooks Maggie Valley with Lake Junaluska and Canton easily visible to the East.

Words were spoken and prayers were offered and tears were shed for Withers as his friends and his family — including Libby Wilder’s young granddaughter Grace, who on that day became at least the fourth generation of Mike’s family to visit Ghost Town — circled around each other near the front of the church.

Mike Walker called Withers his “trinity” — a brother, a father figure and a best friend.

They sang a short hymn, and Libby Wilder finished the ersatz service for the lifelong carpenter by reciting from Genesis, while Grace picked tiny yellow flowers from the gravelly road and dumped them into the plastic bag containing his remains.

“By the sweat of your brow will you have food to eat until you return to the ground from which you were made,” Libby said. “For you were made from dust, and to dust you will return.”

With that, she poured some of the contents of the bag in a shady spot at the front step of the church, and in a nearby flower garden.

Then the Walkers took their turn, opting for a scenic overlook next to the church.

When Wilder’s daughter Mary saw the Boot Hill Cemetery next door, she headed right for it, laughing. Her father Bobby joined her there, where they spread Withers’ ashes near the fake tombstone of a man killed for playing with an extra ace.

Once they were finished, they all headed back down the middle of the deserted Ghost Town Main Street, this time without Mike Withers.

“We know that God worked this out, because I wanted to do this on the anniversary of his death,” Libby Wilder said.

Presley reported last month that the property would be for sale, but no listing could be found. Whether or not Ghost Town ever reopens, it was open to Mike Withers, exactly one year after his death. Withers not only got to return once more, but forevermore; his cremated remains now rest atop the long-shuttered mountaintop amusement park that held generations of cherished memories for him and his family and friends.

Whether more memories of that kind will ever be made again there is anybody’s guess.