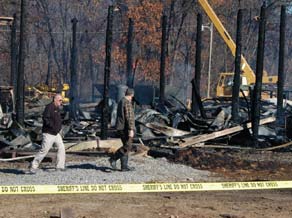 A lawsuit over the historic sawmill that burned down at Haywood Community College nearly four years ago was settled last week in a ruling by the N.C. Court of Appeals.

The ruling was yet another blow for Kyle Edwards, whose good intentions to save the sawmill from demolition unraveled in a perfect storm of bad luck and blunders.

Edwards bought the various components of the sawmill from HCC at an auction in 2012 after the college decommissioned it. He planned to restore the old sawmill to working condition to preserve it as a cultural heritage icon.

He was in the process of dismantling the sawmill when a fire struck, destroying some of the parts before he had a chance to haul them off.

Edwards, a jack-of-all-trades contractor and long-time businessman in Maggie Valley, sued both HCC and its primary insurance carrier for $300,000 following the fire.

Edwards’ own crews accidentally started the fire when taking the large sawmill apart, but Edwards nonetheless hoped to recoup his loss.

However, HCC claimed it wasn’t liable for the fate of the sawmill equipment once the auction came and went. The day of the auction, the auctioneer had clearly laid down the rules for all the bidders — Edwards being among them.

“The auctioneer told the assembled bidders that upon placing a winning bid at the auction, the bidder would become the legal owner of the item,” according to the Court of Appeals ruling.

HCC wasn’t responsible for any parts or equipment that got “lost, stolen, broken or damaged” once they were sold, the auctioneer told the crowd of bidders.

Edwards bid $85,000 on various sawmill components and equipment during the auction itself. Other bidders bought some parts, but Edwards went around to them after the auction and made private deals to buy those as well until he had amassed the critical makings of the sawmill.

He bought more than 30 items in all — including several motors and engines, saw blades, operator cabs, old hand tools used to work on the mill, hoses, tubing and even a ladder and extension cords.

The winning bidders were supposed to dismantle the sawmill equipment and haul it away themselves. The auctioneer told all the bidders upfront to remove their spoils from the auction within 30 days.

Edwards chipped away at it, but the 30-day window came and went before he finished dismantling all the parts he bought.

When the fire struck 51 days after the auction, everything still left in the sawmill building was a total loss.

The suit didn’t stipulate the value of the equipment Edwards still had left in the sawmill when it burned, but even the components he had already removed wouldn’t be worth much without the sum of all the parts. But Edwards also had some of his own equipment on site at the time of the fire, including a crane and Bobcat he was using to dismantle the mill.

In the suit, Edwards claimed HCC placed unreasonable time constraints on when he could get into the sawmill and remove the equipment he bought. HCC only let him into the sawmill between 8 a.m. and 4 p.m. on weekdays.

Before the auction, bidders were made aware of the time window to remove equipment from the on-campus mill.

But Edwards claimed the limited window hampered his ability to get in and dismantle the components he’d bought in a more timely fashion. Not being able to get in on weekends meant the job took longer than it otherwise would have, and thus it was HCC’s fault that he still had equipment inside the sawmill building when it burned down 51 days after the auction.

However, HCC countered that the fire was Edwards’ fault in the first place. The day of the fire, Edwards’ crew had been working at the sawmill, using torches to cut apart components in the building. Sparks from the torches started a fire, which the men put out, but apparently not well enough, according to HCC’s filing in the suit.

The crew “did not fully and adequately extinguish the fire, and the same continued to burn and smolder, resulting in a re-ignition of flames,” according to HCC’s response to the suit.

After putting out the fire, or at least thinking they had, crews continued to work in the building until quitting time, and then went home. Around 10 p.m. that night, a 911 call came in from a neighbor who saw flames coming from campus, but the fire was fully involved by then and the sawmill was a total loss.

HCC claimed Edwards’ crews had been negligent by not ensuring the smaller fire earlier in the day was completely out, and by not using better safety precautions to prevent a fire in the first place.

While the sawmill fire happened in fall of 2012, Edwards didn’t file a suit claiming damages until the summer of 2014, nearly two years later. Edwards was represented by Waynesville Attorney Rusty McLean. The lawsuit was initially heard in Haywood County court in May 2015 by Superior Court Judge Brad Letts.

Nor had Edwards taken out insurance of his own to cover the sawmill equipment he’d bought.

“During the seven weeks following the auction, plaintiff removed some of the items he had purchased, but made no attempt to secure insurance coverage for his purchases,” according to the Court of Appeals ruling.

At the time of the auction, Edwards said his reason for purchasing the parts of the sawmill was to keep an important piece of the county’s cultural heritage intact, and hopefully get it working again.

Edwards had a personal connection to the HCC sawmill as well. The dance floor of his famous Maggie Valley clogging venue, The Stompin’ Ground, was built with timber kiln-dried at HCC’s sawmill.

College leaders decided in early 2012 that the decommissioned sawmill was taking up valuable space on campus. They decided to auction off the sawmill equipment and parts, and then figure out what to do about the structure itself — but they never crossed that bridge due to its total loss in the fire. HCC got an insurance payment following the sawmill fire for the structure — but not the contents — which has been put toward the construction cost of the new Public Safety Training Facility, which includes a “burn tower” for firefighters to practice fighting simulated fires.