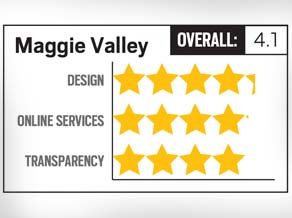 Years ago, the Town of Maggie Valley used to be known as a place where governance didn’t always take place in full sunshine.

Those days appear to be long-gone — Maggie Valley’s website earned high marks for transparency, especially in regard to maintaining an updated calendar and keeping the public informed about special announcements. Access to municipal ordinances is also simple, straightforward, and useful, and as far as recordkeeping goes, the town has meeting minutes dating back to 2004 for the Board of Alderman, the Planning Board, and the Zoning Board.

Government doesn’t get more open than that, except for the video recording of town meetings, which Maggie Valley — and, in its defense, many communities in the area — simply does not do; if it did, the town’s total score would have been much higher and probably would have put it in the lead overall amongst area government websites.

But let’s talk about that design; the website was originally launched in 2006 and redesigned in 2012, but doesn’t look dated in the slightest — a testament to the timelessness of a clean, clear, minimalist eye. Users aren’t overwhelmed with information when first accessing the site, and the “tumbling columns” animation is fun enough to be different, but not overbearing or annoying.

Mobile compatibility could probably use a boost — the mobile site is simply the regular website at a smaller scale, making it a little more difficult than it should be to access links. But it does indeed work — again, a testament to uncluttered design.

Maggie Valley also earned respectable scores for online services — tax payments can be made on the site, but they’re counterintuitively buried under the “Departments” tab instead of being right out front where taxpayers can easily find them.

And although the category wasn’t specifically scored, Maggie Valley would probably win the award for “biggest bang for the buck.” The site cost just $1,330 in 2006, and the 2012 redesign another $2,000. Site maintenance from 2006 through 2013 totaled $3,905. Compare that (and Maggie Valley’s overall score) to other local governments spending upwards of $20,000 on a new site every few years, and it’s clear that Maggie Valley is delivering a high level of online service to residents for a very, very low price.