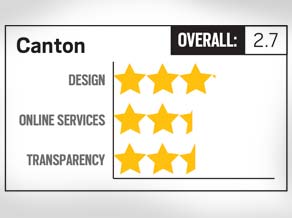 The Town of Canton’s website was the subject of discussion during recent budget hearings, as some questioned the need for spending $25,000 (plus $5,000 for marketing) on a new one.

One resident lamented the expense, asking “I thought we got a ‘Cadillac’ website the last time!”

Indeed they did. But that was back in 2012, which in internet years makes the website hopelessly out of date, especially when looking at permitting, property mapping and mobile compatibility — all of which are concerns that didn’t so much matter when it was created right as the tablet and smartphone revolution began to unfold.

The stakes are extremely high right now in Canton — the town continues to make itself more attractive through streetscaping and downtown improvements, and just resolved to create a downtown association similar to the highly-successful Downtown Waynesville Association, all in hopes of attracting both residents and businesses who have been priced out of the Asheville market but still wish to remain part of its bustling economy and cultural scene.

The good news is that the funding of a new website ended up making the cut for the 2016-17 budget, so Canton will sport a new look and feel sometime soon; hopefully that aesthetic makeover will include a significant reconsideration of how the town communicates with residents. The availability of town ordinances as well as the calendar/announcements sections scored above average to excellent, but the accessibility of meeting agendas, minutes, and videos of meetings was among the worst in the area.

But in terms of value, taxpayers have little to complain about — although the current website did cost a whopping $28,000 to construct, it didn’t actually cost Canton residents a dime; it was funded through the North Carolina Rural Economic Development Center, according to Canton Assistant Town Manager and Economic Development Director Jason Burrell.