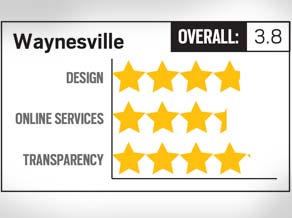 As the largest town west of Asheville and the county seat of Haywood County, Waynesville is the economic engine of the region, driving development and investment from Canton to Cherokee. Accordingly, its burden is high — some of the most important interactions residents will have with any local government occur on its website, almost 90 times each day.

And while Waynesville’s overall score puts it near the top of the list, some mildly troubling issues remain.

Despite being only three years old, the site already looks dated. The rotating banners and the large circular icons on the home page hearken back to the do-it-yourself days of Geocities and MySpace, and mobile compatibility is merely average due to issues with scaling photos.

Also troubling is the seemingly-dormant “performance dashboard” which is supposed to be an “interactive web-based tool [that] provides data sets and graphs to show and explain the performance measures we use to gauge our success.”

A noble effort, to be sure — but it seems that maintenance of the documents associated with this tool has fallen by the wayside. The main page of the dashboard contains only a mid-year report from 2013, demographic info hasn’t been updated since at least 2014; ditto for the “Budgeting and Finance” and “Parks and Recreation” sections.

The “General Government” and “Public Safety” sections contain no information at all — just placeholder links that go nowhere, with topics like number of employees, turnover rate, and OSHA-reportable injuries appearing as links but with no further info, as if someone meant to populate these areas and then simply forgot.

The site does, however, make it quick and easy to pay bills, find city employees, and apply for various permits. It also earned high scores for the utility of the calendar, the publishing of announcements, agendas, meeting minutes and ordinances.