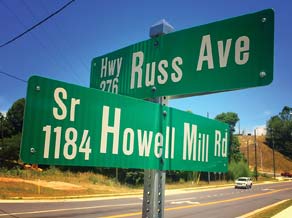 As the $11.6 million Howell Mill Road project was winding down in late 2015, the Waynesville Planning Board began to take a look at zoning within the burgeoning corridor; what the board found was commercial development encroaching on formerly rural areas and disagreements between neighbors on the future of their community.

All that was settled with the implementation of a compromise that left most people pleased.

The Howell Mill Road Corridor begins at Rite Aid on Russ Avenue and wanders 1.5 miles northeast to Evergreen Packaging near Asheville Road. In March 2014, the North Carolina Department of Transportation widened lanes and shoulders, straightened portions of the roadway, and installed the roundabout at Vance Avenue.

With the resulting increase in thru traffic and truck traffic in the corridor, some property owners near Calhoun Road sought a change from medium density residential to commercial this past February.

The commercial designation would prohibit residential development and allow everything from light office and service based developments to adult establishments, drive-in theaters, manufacturing, racetracks, schools, storage facilities, and wholesale operations.

Other property owners weren’t happy with these possibilities, and made their feelings known at an April 4 community meeting. They cited their strong sense of community, the open space and the convenience of living in the country — owning horses and planting gardens — but being just minutes from town.

They also cited their reluctance to look upon the “backside of a factory.”

The result of that community meeting was to change the nature of their request from commercial to a new zoning district, called “urban residential” and similar to existing urban residential zones in East Waynesville and Hazelwood.

Waynesville Town Planner Elizabeth Teague presented the details of the new Howell Mill Urban Residential District to the town board on June 14. Although the entirety of the district isn’t within Waynesville town limits, it is within the town’s extra-territorial jurisdiction — North Carolina cities enjoy ETJ authority up to a mile from the edge of town limits, sometimes up to three miles.

Among the important changes from medium residential to urban residential are an increased density from eight units an acre up to 16 (or 24 with a special use permit), as well as the allowance of personal and professional trades like accountants, architects, cobblers, engineers, graphic or interior designers, insurance and real estate agents, stylists, tailors and physicians.

The rezoning, said Teague, was — as it must be, per NC law — consistent with the town’s land use plan.

Titled “Waynesville Our Heritage, Our Future” the plan was released in April 2002 with the goal of promoting organized growth and development while boosting land value through the preservation and enhancement of Waynesville’s existing neighborhoods.

The new urban residential designation satisfies those stipulations, according to Teague’s presentation, which called the rezoning “a compromise to maintain residential character but allow some commercial uses” while also increasing density. It also establishes a buffer zone that maintains the separation between residents and Russ Avenue.

“We have areas within Waynesville where high density commercial areas butt up to residential areas,” said Waynesville Mayor Gavin Brown during Teague’s presentation. He lamented the fact that nothing could be done about those existing areas, but seemed pleased that the new district would prevent contentious zoning arguments before they arose.

The areas included in the new district include seven lots located at 333 Howell Mill Road, one at 11 Palmer Hill Road, and an unaddressed lot on Calhoun Road, totaling just under 6.7 acres.

In March, Tom Shook, owner of one of the newly-rezoned parcels, said he has been trying to sell his residential property “for several years” and is “always” asked by buyers if rezoning is a possibility.

Now, he can tell them that by statute, his Howell Mill Road Urban Residential district is “a transitional neighborhood that buffers rural and medium density residential areas from the intense commercial uses found within the Russ Avenue Regional Center District” but still allows for certain commercial uses.