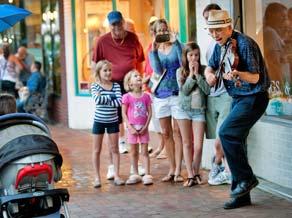 Downtown Waynesville has racked up another accolade with the Great Places in North Carolina award — an honor that carries a little more clout and honor than the typical online poll or best-of list.

The recognition dished out by the American Planning Association’s state chapter required proof that downtown’s awesomeness wasn’t luck or happenstance, but instead took a concerted, conscious and collective effort to make it so.

“I thought it was important that Waynesville get recognized for the great planning that has been done over the years on Main Street and the many partners who have worked hard to make Main Street Waynesville what it is today,” said Elizabeth Teague, Waynesville’s town planner and development services director who nominated the town for the award.

Main Street’s success is due to many actors all doing their part to drive downtown’s revitalization — from the entrepreneurs toiling behind storefronts, the tireless advocacy and promotion of the Downtown Waynesville Association, the arts and cultural groups hosting festivals and public art displays, the town planners setting the stage with tree-lined sidewalks and pocket parks, and the public works crews behind the holiday lights, historic lampposts and brick sidewalks.

Teague emphasized Main Street’s role as a public commons where the community comes together, running the gamut from parades, monthly art strolls and square dances to trick-or-treating, seeing Santa and charity events.

“Everyone seems to recognize Main Street as the place to go for a special occasion or community celebration,” Teague said. “There is a vibe to Waynesville’s Main Street that can make anyone relax for a moment and remember that the world is full of good people and beauty.”

Cultural heritage and a sense of place have not been compromised by Main Street’s revitalization, but instead have been emphasized through public art installations and historic building preservation, examples of which Teague outlined in the application.

Waynesville was one of three Main Streets honored with the Great Places title this month from the state chapter of the American Planning Association. Waynesville Alderman Jon Feichter made the trip to Raleigh to pick up the award, which was given out in conjunction with the N.C. League of Municipalities legislative lobbying day. Feichter said downtown’s revitalization is a testament to what’s possible when a community rallies behind a vision.

“It is the story of merchants, property owners and community leaders who looked at what Waynesville was in the mid-1980s and said, ‘We can do better,’” Feichter said when getting the award.