Shelter advocates turn out in force 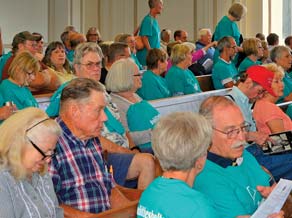 Easily identifiable in their teal T-shirts with the “#buildtheshelter” hashtag emblazoned on the back, an estimated 100-plus person crowd turned up at the June 20 Haywood County commissioners’ meeting to show their support — both personal and financial — for the proposed $3.3 million Haywood County Animal Shelter project.

Back on June 6, Haywood County Finance Department Director Julie Davis called for a special information meeting for members of the public, as well as a public hearing regarding the acquisition of a construction loan for the shelter. Both are prerequisites to applying for the loan.

The meeting and hearing took place on June 20. No vote or other action was to be taken on the matter, but proponents — and one or two opponents — took almost two hours to address the board.

The county’s current animal control facility is meagerly equipped, aging and has trouble with parking, overcrowding and disease transmission, but the proposed new facility will include better ventilation and waste disposal, a retail-style adoption area and a conference room where educational events can be conducted.

While most public comment seems to recognize the need for such a new facility, the few detractors that have expressed grievances focus on the potential cost and duration of the loan.

Dr. Kristen Hammett of the Animal Hospital of Waynesville was among the first to speak in support of the new facility, telling the board that in the 28 years she’s worked with the shelter, the mission of shelters across the country has changed from simply holding animals for euthanasia to holding them for adoption.

“To treat the treatable,” she said.

Hammett founded the advocacy group Friends of the Haywood County Animal Shelter two years ago, hoping both to raise awareness of the need for the shelter, and to raise funds to furnish it.

On June 16, FCHAS held an awareness event that also served as the kickoff to its fundraising campaign. The group hopes to raise $1 million and says it will donate it to the county to help pay off the 40-year loan in only 22 years.

“I have to ask the question, if private fundraisers can come up with $1 million, why can’t they come up with $3 million?” asked Scott Muirhead, who joked that he thought about donning his motorcycle helmet before addressing the board in front of the large pro-shelter crowd. “Why does it always fall back to the taxpayers? I’m not griping about $2 a year, I’m griping about — it’s always chip, chip, chip.”

An invitation to bid on the project will be released “post-haste,” said Haywood County Manager Ira Dove. The board will then select a qualified bidder near the end of July or in early August.

According to Davis, approval of both the interim and permanent loans is expected in September. Once loans and contractors are in place, the county would go to the Local Government Council for approval on Sept. 6. Upon approval, the Haywood County commissioners must approve the contract; their next opportunity to do so after the Sept. 6 meeting would be on Sept. 19.