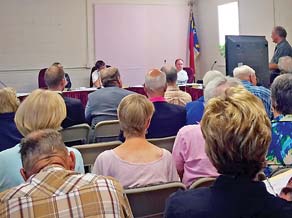 There wasn’t an empty seat in the house when the Maggie Valley Board of Aldermen met for its public budget hearing on June 13, but it was a zoning issue that took up 90 percent of the three-plus hour meeting.

Town Manager Nathan Clark presented the 2016-17 budget, which contains no tax increase and retains Maggie Valley’s claim to the lowest municipal property taxes in Haywood County. It was passed with no public discussion and unanimous consent in two minutes.

But by the time the board had gotten to the budget, most people in the tiny makeshift boardroom had already left — albeit, unhappily.

Earlier, more than 50 people packed the room. Chairs as well as spectators spilled out into the hallway.

Almost all of them were present to contest a request for rezoning on an approximately 10-acre tract of land known as Mountain Meadows, which is near the entrance to the high-end Campbell Mountain Estates on Jonathan Creek Road.

A gated community that is zoned R-1, or low density, Campbell Mountain Estates is located just west of Highway 276 and about half a mile north of Soco Road and was developed by Steve Foreman, who also made the request for Mountain Meadows.

The Maggie Valley Planning Board recommended approval for the request weeks ago, and called for the parcel to be rezoned R-2, which is medium density and also theoretically allows for structures like manufactured homes, boarding houses and child care facilities (although none are planned).

Residents of Campbell Mountain were concerned with the measure for a variety of reasons when they first learned of it, and almost 20 of them came out to speak against it.

Pam Potter, president of the Campbell Mountain Estates Homeowners Association, started by saying that the relationship between the association and Foreman had broken down months ago, echoing the concerns of many residents who never dreamt their luxury estate-type homes would one day look out upon medium-density, affordable housing units — possibly up to 40 of them.

They feel as though these homes will change the character of their neighborhood.

“We feel like we have been betrayed,” Potter said.

Jim Boston, another Campbell Mountain resident who hasn’t been in his home long, said “If I would have known this crap was going on, I would have bought somewhere else.”

Hank Jaeger put his home in Campbell Mountain Estates up for sale 90 days ago, for medical reasons. He said he’d heard “a lot of opinions” on its current value and wasn’t sure who to believe. During that 90-day period, 11 potential buyers toured his home, and he did receive two offers — both of which were withdrawn when the buyers learned of the possible rezoning.

Laurie Regish, who has been in her Campbell Mountain home almost a year now, said she felt “defrauded,” and even invoked the name of deceased former Maggie Valley Mayor Ron DeSimone, who died in a tragic construction accident last July.

“The proposal certainly does not honor him,” she said. “We do not believe this would have been set forth had Ron not been killed.”

Campbell Mountain Residents went on to decry potential problems with traffic, parking, security, the devaluation of their homes, and the harmony of the community as a whole as they filed up to the podium to address Mayor Saralyn Price and the rest of the town board. Some of them even resorted to personal attacks against Foreman, calling him dishonest, deceptive and duplicitous.

Just one person spoke on behalf of Foreman.

As public comment drew to a close, Andrew Bowen, Maggie Valley’s town planner, stunned the crowd when he told them that a 2007 land use plan for the town showed the best use of Foreman’s parcel was actually R-3 zoning, which is high density.

How it ended up back at R-1 isn’t immediately clear, but Bowen’s assertion made R-2 seem like a blessing, compared to R-3.

When Foreman finally got his chance at the podium after more than an hour of hostile comments pointed his way, he emphasized his roots in the community.

Foreman has been involved in real estate for 40 years, including 20 of those in this area, and claimed that this project “meets the demands for housing in Maggie Valley.”

Most notably, he said that he currently owns 55 lots in or near Campbell Mountain Estates, including 27 in Mountain Meadows.

“Why would I want to shoot myself in the toes?” he asked, meaning that he didn’t think the project would jeopardize property values or the overall appeal of Campbell Mountain Estates.

As the town board finally took the measure to a vote, Price began by sharing her opinion.

“In the best interest for Maggie Valley, I feel like it should be zoned to R-2,” she said.

Alderman Mike Eveland — who peppered Foreman with questions about nearly every aspect of the project — echoed the mayor’s sentiments, saying that it “makes sense.”

Alderwoman Janet Banks said she’d struggled with the issue for some time.

“I do understand, being a homeowner in Maggie Valley, the issues. What happens when you retire and come here and you sink all your money into your dream house and you discover that development is coming right under your nose?” she said. “I have the privilege of having a house being built below me that I never thought was going to be built, and I have the perfect view of their port-a-potty right from my bedroom. Unfortunately, the world is changing, and development is going to come.”

Banks voted in favor of the R-2 designation.

With Alderman Phillip Wight absent from the meeting, that left only Clayton Davis, who said he’d actually lost sleep over the issue, to weigh in.

Davis, who was appointed several months ago to fill a vacancy on the board, said he might not run for the board seat, so he wasn’t beholden to any of the stakeholders in the project and wasn’t trying to score points with the crowd, but he, too, joined the board in their unanimous approval of the rezoning.

After having his rezoning request granted, Foreman said he felt “excellent” about the result, and also thought he received a fair shake throughout the process, even though he said he felt that certain character descriptions of him were inaccurate.

“We’ve been residents of Haywood County since 1996,” said Foreman. “We’ve done four prior subdivisions [locally], and we intend to continue being a positive economic factor here in Haywood County.”

However, Mike Finnuccio, who currently lives in south Florida and purchased a home in Campbell Mountain Estates, flew up to the area three days ago specifically to speak out against the proposed zoning change.

He says he was “mesmerized” by the mountains in Maggie Valley despite growing up surrounded by them in central Vermont, and warned that the town was about to fall prey to the same type of “indiscriminate development” that has taken place near his Florida home over the past 20 years.

“I can see where the town officials feel that they are acting in the best interests of the municipality, and I feel for the residents of this community who relied on the representations of the developer as to what this community was going to look like,” said Finnuccio. “I think they all feel betrayed.”

When asked if this would affect his future plans in Haywood County, Finnuccio said, simply, “Yes.”

When pressed, he elaborated.

“Where our home is situated, given the potential height of these structures, it would impede the view that we paid quite a bit of money for,” he said. “My wife and I have already discussed it, and we will, in all likelihood, sell the property.”