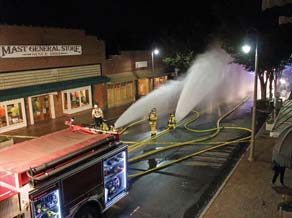 A sparsely-attended special meeting held June 7 at the Waynesville Town Hall was meant to serve as a public hearing on the town’s proposed $29.7 million budget for fiscal year 2016-2017, but instead talk centered mostly around things much more elemental — namely, fire.

The proposed budget is “flat” over last year’s, said Waynesville Mayor Gavin Brown, except for a provision to hire eight new Waynesville firefighters at a cost of more than $530,000 per year.

That provision requires a 4.75-cent increase in Waynesville property taxes, which would bring the rate just above 48 cents per $100 in assessed value — a hike of about 10 percent.

The reasons for the increased staffing are twofold.

In 1998, the Occupational Health and Safety Administration issued revised guidelines for firefighters stipulating that before they penetrate a conflagration, there must be two available to enter the structure, and two available to remain outside, in direct contact with those within.

Waynesville’s Fire Department currently employs 10 full-time firefighters, but relies on around 30 volunteers, all of whom operate out of two stations. What this means is there is only one full-time firefighter on duty per station; in the event of a fire, that firefighter could proceed to the scene, but wouldn’t be able to enter until others — often volunteers coming from miles away — have also arrived on the scene.

Additionally, when the North Carolina Department of Emergency Management held a training exercise in downtown Waynesville last June, firefighters responded to the simulated fire at Massie Furniture Company on Main Street in a timely manner; it was, however, still 20 minutes before the required amount of firefighters were on the scene to allow for rescue. Industry research indicates that depending on the type, quality, and amount of fuel and ventilation, a fire can double in size in anywhere from 30 seconds to just a few minutes.

The hiring has received widespread support from members of the board who, rather than simply accept the fated increase, instead actively searched for ways to ameliorate it. What they found was widespread inequality in the price property owners pay for fire protection.

Residents of Waynesville currently pay about 10 cents per $100 property valuation for fire protection, which is rolled into their property tax bill. 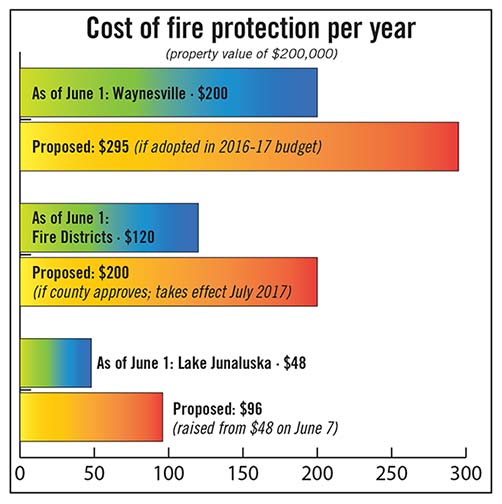 Those outside town limits are assigned to fire districts and pay just six cents per $100, which is collected by Haywood County and ultimately remitted to the department.

Some homeowners outside town limits are getting an even better deal — tax rolls haven’t kept up with new development, meaning that a select few people pay nothing at all.

And then there’s Lake Junaluska.

Because of a historical oddity with origins difficult to trace fully, until June 7 Lake Junaluska residents had paid a flat fee of just $4 a month for fire protection from the town.

But at the June 7 meeting, Brown and the board doubled that rate, which is expected to raise about $51,000 in additional revenue beginning Aug. 1. Additionally, Brown said they were working on getting the three or so developed properties on Lloyd’s Mountain — who pay nothing — on some kind of payment system.

That leaves only those in fire districts outside town limits to be dealt with.

“I don’t think the citizens of Waynesville should have to bear this entire burden,” said Alderman Jon Feichter. “Citizens outside the town [also] bear the benefits.”

For them, Brown proposed raising the rate from six cents to the maximum allowed — 10 cents per $100. The problem is, the town can’t simply make this change on its own; those revenues are collected by the county, who would have to approve the city’s request.

Adding insult to injury, the window for such a request has long since passed. The county would need to be notified by the town in November so it can work the request into its preliminary budget, which is usually put together in spring. That means that if the county were to approve Brown’s request, it wouldn’t take effect until July 2017. Such action would, in interim Town Manager Mike Morgan’s estimation, raise $146,000.

Neither of those finger-in-the-dyke measures will have any immediate impact on the proposed Waynesville budget, which will go up for vote June 28; the increased revenue from Lake Junaluska won’t start to be collected until August, and then only for the 11 remaining months in the 2016-17 fiscal year, and increased revenue from the fire districts may not ever come to be.

So, despite the increased collection, the budget will still call for the 4.75-cent tax hike. But there is a silver lining.

Morgan — who brings significant local government and EMS experience to the job — called for eight additional full-time firefighters in addition to the current cohort of eight, and cautioned that this was just the beginning of making Waynesville’s fire department more robust; reexamination of these inequalities in fire protection charges have also led to the realization that were Lake Junaluska to be instead included in a fire district like the rest of Haywood County outside the Town of Waynesville, it would raise more than $500,000 in new revenue.

The Waynesville Fire Department protects property worth more than $1.9 billion.