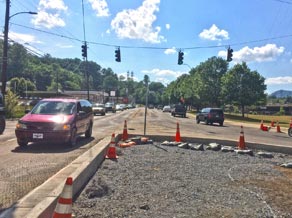 For the past few months, downtown Canton’s long-awaited repaving and streetscaping projects seemed to be cruising right along in the fast lane. But now, residents and businesses alike are concerned that there’s a wheel in the ditch, and a wheel on the track.

Last June, a North Carolina Department of Transportation repaving contract for the Town of Canton was made available for bidding, and awarded to Waynesville-based WNC Paving shortly thereafter.

This March, Canton greenlit a downtown streetscaping project that would include planting trees, grading sidewalks, and installing “bulb-outs,” which are essentially curb extensions that calm traffic and minimize crosswalks. The cost of the improvements – about $132,000 – would wisely be split over two budget years to minimize financial impact.

There were, however, a few potholes to dodge.

“I approached them [the DOT] in March about the possibility of integrating some of the improvements into the finished project,” said Seth Hendler-Voss, Canton’s town manager. “They embraced our plan, ended up approving it, and agreed to adjust their paving time frame to implement our piece of the scope.”

Originally, the milling and repaving of Canton’s east, west, and downtown were to begin in mid-April and be completed on June 30, well in advance of the Independence Day holiday. Jonathon Woodard, the NCDOT District Engineer who is responsible Haywood, Jackson, and Swain counties, says DOT told Canton that even though the contract was in force, both the DOT and WNC Paving would be willing to work with Canton.

WNC Paving and the DOT agreed to extend the contract one month — to July 31.

“We had a meeting May 11 with merchants in town. Seth and the mayor [Mike Ray] were there, WNC Paving was there, right before work began on the project. What we said,” Woodard revealed in a phone interview on June 6, “was that work on the ends of town would be done by July 4, and downtown work would start sometime after July 4.”

Since road surface milling had begun in late May but Canton’s improvements still hadn’t been completed, the town was faced with two choices: use even more taxpayer money and get stuck with a lower quality job by paving over the milled surface and then ripping it up later to accommodate the streetscaping; or, suffer through a summer of milled streets because WNC Paving would have to leave the Canton job for another project in Swain County and couldn’t return until mid-August due to time constraints on the Swain job.

“On May 24, we had another meeting with Seth and WNC to discuss the progress the town was making and where we were at with the schedule,” Woodard said. Presented with the two options, Woodard says Hendler-Voss chose to wait on repaving all roads, not just the downtown area.

The next day, at the May 25 Canton Town Board meeting, Hendler-Voss surprised the board when he informed them of the new timeline.

Hendler-Voss’ declaration to the board made it seem as though the DOT made the decision; however, in the June 6 interview, Woodard said it was totally the town’s call to alter the schedule.

“Yes, It was a surprise that they had pulled out,” said Canton Mayor Mike Ray of the paving crew. Alderman Zeb Smathers said he thought he spoke for everyone on the board when he said he was “shocked and unhappy,” and he was right.

Hamlett and Mull admitted to being surprised by the May 25 announcement, which Hendler-Voss said wasn’t so much a decision made by him as it was a presentation of the two options to the board.

Alderman Carole Edwards had this to say about the situation via email on Tuesday (June 7): “I am not happy about the situation but, I do not believe there is anything we can do about it at this point. Our town manager would be the better person to discuss the situation. He is the person who has the details as to what took place and why the original schedule was not followed.”

Regardless of who made the decision, messages left on social media suggest that Canton residents are already feeling road rage.

“Patience is a virtue,” Mull said on Saturday, noting that the project is so overdue and will have such a long lifespan once completed that a few weeks’ delay should be taken in stride.

“While it’s a little inconvenient and looks a little messy, I’m confident that the end product will be worth the wait and the eight weeks they had to drive over grooved roads,” Hendler-Voss said Tuesday. “Road construction is a lightning rod — nobody likes it.”