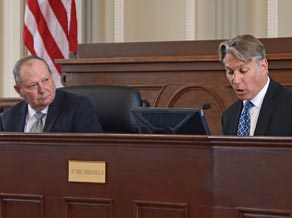 For 21 years, firearms have not been permitted on any county-owned property, except for law enforcement officers on duty. Almost nine years ago, that policy was whittled down, allowing exceptions for gun shows.

At 9 a.m. Monday morning (June 6), prohibition as a whole was on the chopping block as the Haywood County Board of Commissioners considered an ordinance lessening those restrictions even further.

That didn’t stop Second Amendment advocates from fighting it.

Several interested citizens signed up to speak before the June 6 meeting of the Haywood County Council; all disputed the measure.

One said she’d feel safer seeing a firearm on someone than guessing whether or not they were armed.

Another was concerned that she might unwittingly stumble into a heretofore unknown prohibited zone whilst carrying legally.

Yet another asserted that a collection of items he’d brought with him to the meeting and proceeded to produce at the speaker’s podium — including car keys, a shoestring, a rosary, a crucifix, a Bible, and his hands —  were all are capable of inflicting serious injury, and that danger inherent in those items lies not in the items themselves but rather in the intent of the owner.

But despite their best efforts, they couldn’t prevent the county board from passing an ordinance expanding their rights. A J.W. “Kirk” Kirkpatrick motion and a Bill Upton second — augmented by a unanimous “yea” from the rest of the board — made concealed carry with a lawful permit permissible on all Haywood County grounds; concealed carry is, however, still prohibited in Haywood County-controlled buildings.

“I can only speculate, but it seems to me, this morning, based on some of the comments made, people had not read the latest version. I don’t know what other explanation there could be,” said Commission Chairman Mark Swanger.

Indeed, twice during the public comment section of the meeting, Swanger had to stop and remind people that the proposed ordinance would allow for concealed carry on county property where before it had been illegal. The first line of the ordinance reads, “The primary purpose of this revised ordinance is so that permitted concealed carry holders may carry their concealed weapons on County grounds.”

Instead, gun rights activists like Bruce Kellum focused on the fact that concealed weapons are still not permitted in county buildings.

Kellum — a Vermont native — was surprised when, while moving to North Carolina 18 months ago, he found that concealed carry required an expensive permit; Vermont requires no such permit.

“I feel that the Second Amendment clearly states that the right of the people to bear arms shall not be infringed,” he said. “Now, they’re talking about banning open carry on public court grounds.”

In Kellum’s defense, County Attorney Chip Killian did state that this was the sixth incarnation of the ordinance since it was originally drafted months ago; a recent change in North Carolina law gave municipalities like Haywood County the option to modify the 1995 and 2008 ordinances that regulated firearms in and on municipal grounds. And while most opponents of the ordinance didn’t get what they were asking for, they’ll apparently have to settle for more.