Glad to be alive: Bear bite victim tells his story 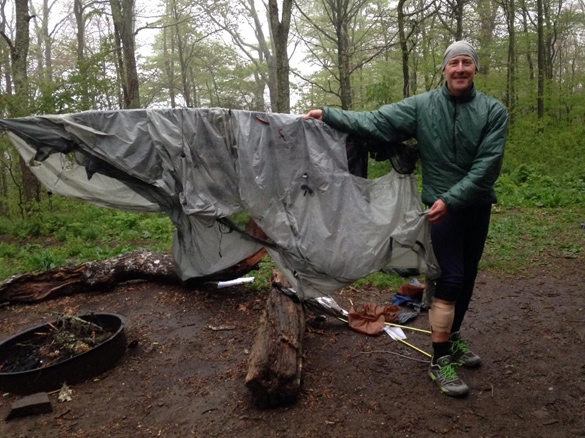 The sun had not quite set when Bradley Veeder fell asleep in his tent May 10, feeling “tired but happy” after a 17-mile day on the Appalachian Trail.

The 49-year-old Montana native was no stranger to trail life, having more than 20 years’ experience backpacking in places ranging from Wyoming to Oregon to Nepal, and he’d been putting in 15- to 20-mile days ever since starting his A.T. thru-hike April 30. Sound sleep was an important part of the recipe.

But that night near Spence Field Shelter in the Great Smoky Mountains National Park wasn’t to be a slumber-filled evening. At about 10:30 p.m., Veeder woke up to “a sharp pain in my right calf and an agonizing sensation like my calf was being squeezed in a vise,” he wrote in an online account of the incident that cut his A.T. hike short.

It was a bear, he was sure. He sat up, screamed, “No bear! Go away!” and the bear let go. A large hole gaped in the tent wall where his leg had been. Veeder drew his legs up in case the bear tried to bite the same spot again.

Then the tent wall began to bulge, this time at upper-body level. Veeder punched the bear as hard as he could, shouting, “No bear! Back off!” But the bear didn’t leave. It went for the vestibule, a compartment at the top of the tent where Veeder’s pack was stored. Again he shouted, and again the bear backed off. The process repeated three more times — the bear attacking the compartment, Veeder shouting, the bear backing off.

Then there was stillness. He cautiously reached up for the compartment zipper, but just as he was about to grasp it the bear attacked again, almost catching Veeder’s hand. He shouted again, and again the bear halted. He could hear it moving away, over to the spot where he’d hung his socks out to dry.

“The bear sniffed loudly at my socks for at least a minute, sounding like a very big dog, before the most vicious attack on the vestibule yet,” Veeder wrote.

The vestibule was becoming badly shredded, he realized, and began to panic.

“Since the smell of my own blood was so strong to myself,” he continued, “the bear must have been driven crazy by the scent.”

The bear attacked the vestibule three more times before silence reigned. Veeder waited for about 10 minutes before deciding he had to move. But the shelter where the other hikers were sleeping was about 200 feet away — a long walk when it’s dark and you’re limping and an attacking bear seems to lurk in every shadow. Not that there were too many shadows. It was a dark night, and everything was blackness.

“I was sure that the bear would pounce on me from behind, pin me down and start feeding,” Veeder wrote. “I had just seen ‘The Revenant’ a few months before, which left a vivid picture in my mind. I was terribly afraid that I would miss the shelter and get lost, wounded and bleeding in the dark.”

Fortunately, he stumbled upon the trail to the shelter. A female hiker who was camped nearby heard him telling another camper about the bear, and she gathered her things and followed him to the shelter.

“The next morning, her tent was found to have been shredded by the bear, even though it was only about 40 feet from the shelter. The bear must have followed my blood trail from the field,” Veeder wrote.

Safe in the shelter — which had chain link fence across the front — a hiker applied first aid to Veeder’s bleeding leg, and park rangers were told what had happened. They promised to come the next morning and take Veeder out on horseback.

The rest of the night passed with no more bear encounters, but morning light revealed the bear had stayed busy. In addition to the woman’s shredded tent, hikers who went to collect Veeder’s things from his campsite found items strewn throughout a 100-yard radius. The bear had chewed everything Veeder left behind.

Now back home in Los Vegas, Veeder is at a bit of a loss to explain why the bear targeted him.

It’s extremely rare, almost unheard of, for black bears to attack people without provocation when there’s no food involved, leading to many questions about what Veeder had in the tent with him and how his food was stored. An experienced hiker and backpacker, Veeder had purchased a top-of-the-line, odor-proof food bag, which held all his food and toiletries. The bag was hung from the bear cables near the shelter as he slept.

“My backpack should have had less residual odor than the typical A.T. thru-hiker’s backpack, because food odors would not have permeated the pack,” he said.

Though, as Bill Lea, a renowned wildlife photographer who’s spent thousands of hours photographing wild Smokies black bears pointed out, “Regardless of nearly every precaution you could possibly take, to a bear’s sensitive sense of smell there are going to be some odors associated with a backpacker and his or her clothes or equipment.”

For that reason, he’s taken issue with the park’s labeling the incident as a predatory attack.

The pack itself contained only a few items when Veeder settled down for the night — an umbrella, a water filter, a down vest, a cell phone, a book and a 1-ounce, unopened bottle of sunscreen. He zipped the pack in the vestibule atop the main sleeping compartment of the tent.

The campsite itself was about 200 feet from the fully occupied Spence Field A.T. shelter, and the flat and breezy field where he camped had been recommended by some A.T. volunteers encountered along the way as a good place to pitch a tent. He’d done so, setting up camp and then walking to the shelter to get water, eat dinner and hang the food bag.

“I’m not a bear expert, so I can only guess (why the bear attacked),” he said. “My tent was the furthest from the shelter, and a bear would feel most confident seeking prey at the outskirts of the group of tents near the shelter.”

But as to why the bear went for his leg? His leg was far from the pack, and there was no food in the tent, Veeder said.

“I assume that the bear was put down,” Veeder wrote, “which is unfortunate but necessary.”

Park staff did put down a bear after the incident. It was a 400-pound male, tranquilized in the same vicinity as the attack and with dental injuries consistent with what happened to Veeder’s leg. The animal was too large to transport out to a holding pen and its neck too big to hold a GPS tracker, so park staff decided to put it down before DNA results returned to confirm that it was, indeed, the same bear.

It wasn’t. Ten days after the bear was euthanized, DNA results came back negative for a match.

The park received a substantial bit of criticism after announcing the negative match, with the situation in many minds echoing one from June of last year, when a bear euthanized after a 16-year-old backpacker was pulled from his hammock in the Hazel Creek area also turned out to be the wrong one.

“I understand we can’t have bears breaking into tents when people are in them,” said Lea after the DNA results came back. “I understand that. But I think that if an animal needs to be eliminated we need to make sure we’re eliminating the right animal and not just go out and start shooting — as they did over in Hazel Creek — at the first bear that comes back.”

The Spence Field Shelter is still closed, with park staff continuing to monitor the area for bear activity until leadership deems them to have “exhausted a reasonable search effort,” according to park spokeswoman Dana Soehn. So far, two bears have been captured and DNA tested following the one that was euthanized. Both tests came back negative, but the bears in question were fit with GPS collars during the wait and were not euthanized.

Veeder hasn’t given up on the A.T. Having survived with “minor puncture wounds to my right calf (1 inch to 1.5 inches deep), a very hoarse voice and slightly swollen knuckles on my right hand,” he wrote, he’s now almost healed — able to walk without a limp but also more inclined to bike than walk for the moment.

In July, he plans to get back on the trail, this time embarking on a southbound hike beginning on Mount Katahdin in Maine and ending at Fontana Dam, where he’d started his hike the day of the attack. He’s feeling good about his chances this time around.

“I think that I’ll be able to sleep normally after a few nights on the trail,” he said. “I’ve had no difficulty sleeping since the attack.”

And, based on the photo he posted of himself the morning after, holding up the shredded tent and grinning ear-to-ear, he’s been holding up well during the waking hours, too.

“If it looks odd to see me smiling,” he wrote in reference to the photo, “I felt such a warm feeling of gratitude to be alive that I couldn’t possibly have frowned.”

To read Bradley Veeder’s version of the bear encounter that left him bitten and with a shredded tent, visit www.peachpeak.wordpress.com.