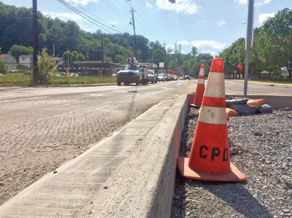 Canton Town Board Member and Mayor Pro-Tem Carole Edwards had a hard time concealing her dismay at news that Canton’s downtown resurfacing projects weren’t proceeding according to plan.

“I’m not trying to shoot the messenger,” she said to Canton Town Manager Seth Handler-Voss at the board’s regular May 26 meeting when he informed the mayor and board that WNC Paving would start the job early and finish the job late, possibly as late as mid-August. Board members were originally told milling on Main Street wouldn’t begin until the town’s Fourth of July festivities were over, but now holiday traffic will have to travel down a bumpy road to get to the fireworks on July 5.

The reason for the early start and late finish was even more upsetting to members of the board; the paving company plans to abandon the Canton job midstream to work on a project in neighboring Swain County, and then return to Canton to complete work there.

Hendler-Voss cited the powerful contractor lobby in Raleigh as the reason Canton has little recourse in the matter. WNC Paving was contracted by the North Carolina Department of Transportation to complete the work in downtown.

Edwards’ and the rest of the board’s outrage stemmed from the fact that much of downtown Canton will remain a work-in-progress through summer. At best, Canton motorists will be forced to navigate a minefield of manholes on milled streets; at worst, businesses could suffer as motorists avoid downtown or find somewhere else to shop altogether.

“We haven’t had any complaints so far,” said Dara Parker, who’s been waitressing at Kobe Express on Park Street, since September. “I hope it’s not too terrible.”

“I don’t understand them tearing up the roads if they’re not going to fix them,” he said. “It’s already taken longer than I expected.”

Further delays in the project could affect the town’s plans for this year’s installment of what is perhaps Canton’s best-known attraction — the Canton Labor Day Festival, which is the longest-running event of its kind in the South and dates back to 1906.