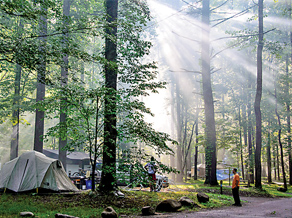 The fee increases would apply only to frontcountry camping — campground sites that don’t require hiking to reach — not backcountry camping, and bring prices 25 percent north of where they are now. Pavilion rentals would also be included.

“We’re hoping that at that level we can restore those seasons that have been shortened across the park and also be able to take on some of the needed renovations that are ongoing at sites across the park,” said Dana Soehn, management assistant for the Smokies.

With the exception of Cataloochee Campground, which had a fee increase in 2011, fees haven’t risen since 2006. But operational costs have, Soehn said, and the park has had to supplement the campground budget from its general funding to cover expenses, sometimes opting to close campgrounds early or open them late to cut costs. The 25 percent increase would bring in an estimated $400,000 per year in addition to the $1.6 million collected from campground fees in 2015.

“I think there’s just a lot of things that people don’t always think about that we have to pay for in order to operate a campground,” Soehn said. “It seems pretty simple to just offer a site in a beautiful place, but there’s a lot more that goes on to make sure that they (visitors) have clean, safe drinking water and that we’re properly disposing of the waste so the very special place they’re camping in is not harmed.”

By law, the fees can be used only for expenses related to operating a campground, but the spectrum of items that fall under that category is quite wide. Camping fees can be used for wastewater treatment, paving and striping roads, paying campground staff and providing interpretive ranger programs in the campground, among other uses. Because the Smokies doesn’t charge an entrance fee, the park keeps 100 percent of fees collected — parks that do charge for entrance have to remit a portion of their camping fees back to Washington, D.C.

“We really are operating nine small cities,” Soehn said. “Each one of our larger campgrounds like Smokemont and Elkmont and Cades Cove, they’re sleeping up to 2,000 people a night when those campgrounds are full.”

Increasing the fee isn’t the only change outlined in the proposal. The National Park Service also wants to add campgrounds at Balsam Mountain, Big Creek and Abrams Creek to the National Recreation Reservation System, meaning that camping there would require advance reservations and payment. The change would allow the Park Service to cut the staff time required to collect fees onsite from its budget.

Ghost of fee increases past

Three years ago, the Smokies approved another change to camping fees — a $4 per night charge for backcountry camping, which had previously been free. Throughout its journey from proposal to approved policy, the issue was embroiled in controversy. People who frequented the backcountry, especially those with roots in parkside communities, felt that the fee formalized an experience that should be free of charge and bureaucracy. Some felt that the fee was just another chapter in the decades-long story of the Park Service forcing local people out in favor of tourists.

“They took our land to start with,” said David Monteith, a Swain County commissioner whose parents were forced to move twice to make way for the park. “They run over 6,000 people off, over 600 jobs, schools, churches.”

With that saga fresh in memory, Smokies staff are quick to acknowledge that they understand fee increases are never popular, saying they’re only proposing this one because it’s necessary.

“While we recognize that fee increases are often unpopular, we are committed to maintaining this ‘crown jewel’ of the National Park Service where visitors can create lasting memories through camping and picnicking in the Smokies,” said Park Superintendent Cassius Cash.

“There’s always going to be people who don’t want to be charged fees for these public lands, but there is a cost to free,” Soehn agreed.

However, it doesn’t appear that this proposed increase is headed for the same kind of controversy as the backcountry camping fee. For one thing, frontcountry camping already costs money — the proposal won’t create a new fee, just increase an existing one. The park’s fees are substantially less than those charged at private campgrounds in the area, and while local people do use the frontcountry campgrounds, out-of-town tourists create the bulk of the traffic.

To Brad Walker, chairman of the Swain County Tourism Development Authority, it just seems to make sense that camping fees would rise somewhat — everything else has gone up in price in the past 10 years, it seems.

“It’s just the way it is. The costs of things are going up,” he said. “I have nothing against it or nothing for it really.”

Walker doesn’t believe that the proposed increase would negatively impact Swain’s tourism industry — people who are already planning a vacation wouldn’t likely be deterred by an extra $3 to $6 per night.

In fact, it’s possible that the fee increase could give private campground owners a boost, even if only a small one, by closing some of the gap between their prices and those offered by the Park Service.

“I think they’re underpriced now and I think they could become more self-sufficient instead of depending on taxpayer money,” said Michael Smith, owner of Turkey Creek Campground in Almond. “It would be more fair with the private sector, competition-wise.”

By contrast, campsites in the Smokies now run between $14 and $23 per night. The 25 percent increase would bring the cost between $18 and $29 — more inline with the going rate. Not that it’s quite fair to do a direct comparison, Soehn said, because sites in the park tend to be more primitive than those offered outside.

The outcome of the proposal, however, will depend to some degree on feedback received. A public comment period is open through June 27, with open houses scheduled in North Carolina and Tennessee during which park staff will be on hand to answer questions about the proposal.

“How people feel that the fees will impact their desire to camp inside the park is important for us to understand and to be able to gauge what an adverse impact it may be on people who may otherwise camp in the park and now feel that these fees may be too much,” Soehn said. “It’s all part of that public planning process, and it might move the needle one way or the other.”

• $14-$23 per night for a family campsite at one of the nine campgrounds in the Great Smoky Mountains National Park under the current fee structure.

• $18-$29 per night for a campground site in the park if the proposed fee increase were enacted.

• $32 per night for a family of three at Turkey Creek Campground in Almond.

• $25 per night for a tent site at Ela Campground in Ela.

• $27 per night for a tent site at Deep Creek Tube Center and Campground outside Bryson City.

• $30 per night for a tent site at Creekwood Farm RV in Jonathan Creek.

The Great Smoky Mountains National Park is taking public comment through June 27 on a proposal to increase campground fees by 25 percent and to require online reservations for Big Creek, Balsam Mountain and Abrams Creek campgrounds — except for Deep Creek the park’s other campgrounds are already on the online reservation system for at least part of the year.

• An open house will be held 5-7 p.m. Monday, June 20, at the Oconaluftee Visitor Center, located 4 miles north of Cherokee on U.S. 441. Park staff will be on hand to talk about the proposal and accept written comments.

• Email comments to This email address is being protected from spambots. You need JavaScript enabled to view it..