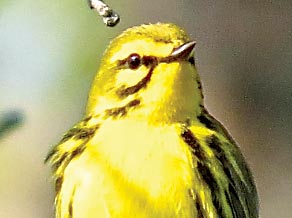 I spend six weeks every spring doing bird surveys for the Forest Service across Western North Carolina. My travels take me from Hiwassee Dam, to Lake Chatuge, to Black Balsam, to Hot Springs, to the Pinks Beds, to Roan Mountain, Mount Mitchell, Roaring Creek and Boone Fork plus other locations.

Many of these points have been in place for decades monitoring the correlations between changes in habitat (say for timbering and/or wildfires, or simply natural aging of forests) and the changes in corresponding bird species.

This past Saturday (5/6/16) I was at the Tsali Recreation Area on the Swain/Graham county line in the Cheoah District. Cheoah is one of the districts I’ve been doing since 2007. I have a number of points in the area in early-succession forests. I don’t know if these conditions came about because of wildfire or timbering, but when I started in 2007 the forest at one of my survey points was very young with a lot of herbaceous, brushy vegetation.

I remember the first morning I surveyed one particular point back in 2007. I was greeted with the raucous song (if you call the collection of whistles, grunts and chatter emitted by the yellow-breasted chat on territory song) of a couple, maybe three different yellow-breasted chats. Chats love dense, shrubby habitat like clearcuts and abandoned fields and they were quite common here for a number of years. But after three or four years the chat serenades began to diminish. I would have to check my records but I think around 2010 was the last record of chats on this point.

Last Saturday, when I approached the point, I was immediately greeted with a new song. It was the buzzy rising song of a prairie warbler. Prairies have a song that resembles one of the northern parula songs but it doesn’t beak-off at the end. It rises up the scale but then just kinda fades away.

As the brushy herbaceous habitat of the chat ages the forest takes on a different “scrub” look with young woody saplings beginning to rise above the tangled underbrush, shading it and diminishing it’s hold on the landscape. This scrubby landscape is no longer optimum chat habitat but perfect for prairie warblers. And the two or three I heard last Saturday seemed to vouch for this.

I am curious now as to what will follow. How long will prairie warblers find this area ideal? What will happen when the young trees begin to become dominant and the forest habitat changes yet again? I’m sure indigo buntings are on the horizon (some are already in the neighborhood) and probably hooded warblers and red-eyed vireos.

When it comes to our relationship with wildlands we are evolving just as forests do. Today we are at a stage where “management” reigns supreme. We know how to create habitat at a species level and if we want chats or white-tailed deer we can create that habitat. But are we mature enough to create a forest? Will stewardship and appreciation replace our need to manage?