YMCA camp gets ready to open in Swain 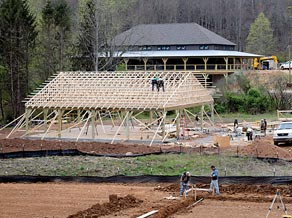 A little more than a year ago it was nothing more than an open grassy field surrounded by forest, but by next month it will be an impressive, state-of-the-art YMCA summer camp.

Camp Watia, 130 acres tucked away some 15 miles west of Bryson City, will begin serving children in Western North Carolina this summer. Camp Director Ryan Hove was on site last week checking in on construction progress, which is coming along quite nicely. Everything is on track for a ribbon-cutting ceremony on June 10 and opening day for the first group of kids on June 12.

“I’ve run YMCA camps all over for 10 years, but opening a brand new camp has been an all new adventure,” he said.

The Glass Lodge — named after the couple that donated the land, Ken and Nancy Glass — will serve as a dining hall upstairs that will seat 300 people and a multi-use indoor recreation room downstairs. The lodge is about 1,300 square feet with plenty of windows and 14-foot porches to give campers an indoor refuge when it rains. Its position up on the hill will give campers and employees a beautiful view of the camp and the surrounding mountains.

Hove said he is most excited about the outdoor amphitheater being built for camper programming. It will be the gathering place for campfires, roasting marshmallows, telling stories and putting on skits.

Camper cabins were also near completion last week. Phase one of the Cabin Village will include a boy village and a girls village with four cabins and a large bathhouse in each village. There are 128 beds to accommodate the first wave of campers in June.

The camp will also include a large open-air pavilion, a half-size basketball court, a soccer field, a swimming hole with a 100-foot long water slide, a welcome center and a hammock village for campers to relax and enjoy nature.

Hove is looking forward to introducing children to the camp and witnessing them getting involved in new experiences.

“I love it all. I love the small stuff kids learn to do while they’re here, whether it’s swimming or going down the slide for the first time,” he said. “It’s the stuff that seems unimportant but that’s what they’ll remember forever.”

The 130 acres of programming space is only a small piece of a larger 770-acre tract that will be under a conservation easement made possible by the Glass family land donation. While many camps in the region cater to out-of-town children, Paul Vest, CEO of YMCA of Western North Carolina, wanted Camp Watia to be affordable and accessible for the children of Western North Carolina.

“It’s always been Paul’s dream to build a camp that’s affordable for local kids, and this is the perfect place to do it,” Hove said.

Financial aid is available. Sixteen- and 17-year-olds may sign up as counselors in training for $300 a week during the inaugural weeks and for $450 during the regular sessions.

For more information or to register for camp, visit www.ymcawnc.org/watia.