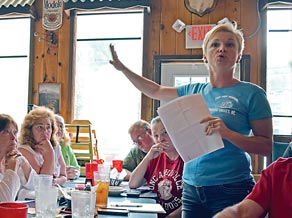 The town has delayed adopting the town center plan as business backlash continues to grow. The town has encouraged public feedback on the proposed plan, but business owners have been meeting independently of the town board to discuss what’s wrong with the proposal. About 15 of them attended the first meeting, but the number grew to about 30 people last Thursday at Guayabito’s Mexican Restaurant.

When the town’s engineering consultants presented their ideas for how to improve the town’s appearance and economy about two months ago, it seemed like everyone was on board with the plan. A room full of people at the town hall presentation raised their hands showing support for it, but now many business owners say they are completely against it since reading the fine print.

The plan includes a long list of potential projects totaling $7 million, but the opposition is mostly concentrated on a road construction project that would drastically change a quarter-mile of Soco Road from the festival grounds to Evans Cove Road.

Instead of a four-lane highway, the quarter-mile “town center” would be widened and a large grassy median with trees and benches would be placed in the middle. There would still be two lanes of traffic on either side of the median, but reverse-angle parking would be added on both the right and left-hand sides of the median.

Engineers estimated $2.25 million was needed for the actual town center construction, which includes allocated funds for purchasing right of way on both sides of Soco Road, but that point didn’t seem to resonate with business owners until weeks later.

Gabi and Rob Edwards, owners of Holiday Motel, would be one of several businesses affected if the roadway project ever transpired. They both raised their hands in support when the project was unveiled but are now helping to lead the effort to stop it from happening. The realization that they could lose 500 feet of their road-front property — including an outdoor pool — was a big factor in changing their minds.

“I think we need to start out smaller. It’s not OK for them to apply for grants for a $7 million plan that takes our property,” Rob Edwards said at the meeting Thursday.

“At first I was excited about it because they sold us on parks, an ice-skating rink and a splashpad,” Gabi Edwards said. “But what they want to tear up is perfectly fine property — we spend a lot of time and money on our garden and property.”

“I’m against it because I respect other people’s property, and it needs to be a good plan for everyone,” Martinez said.

Nielson said he was concerned about people’s safety and traffic congestion if the road is reconfigured. If a wreck occurs and traffic comes to a standstill, he questioned how an ambulance or other emergency vehicles would be able to get through the gridlock.

While downtown Waynesville can be sidestepped by taking the back roads around it, Gabi Edwards said, there would be no way to avoid the traffic in the Maggie Valley town center. She said the construction alone on a project like this would hurt the businesses in the valley.

Even though his business wouldn’t be included in the town center, Eric Freyeisen, owner of Smoky Falls Lodge and Moonshine Grille, said it was unrealistic for a four-lane highway to look like a downtown Main Street.

“Highway 19 is the only way to Cherokee — why would we want to bottleneck traffic and completely destroy the businesses we do have?” he said. “If we don’t have a good season this year I’m closing it down. If the town closes down the road I won’t be here.”

Having a game plan

With Monday’s town center redesign workshop quickly approaching, Nielson encouraged everyone to attend the meeting with a positive attitude and alternative ideas.

“We do need to have a plan — we can’t just argue and make demands,” he said.

Linda Leeke, a Maggie Valley resident who was acting as a moderator for the meeting, agreed that the businesses needed to go to the meeting with a list of ideas. She had all those attending write down their ideas on a piece of paper and have a spokesperson go over those ideas at the meeting.

Since Leekes doesn’t own a business in Maggie Valley, those at the meeting agreed to have her be their spokesperson at the redesign workshop on Monday. Even though she said she “doesn’t have a dog in the fight,” she said she was against the town center plan because it would be devastating to businesses.

“You’re all here when no one else is and you’re who pay the taxes,” Leeke said to business owners. “You need to get them to listen to you all.”

Everyone at the table agreed that Maggie Valley needed to do something to bring more people to the valley, but not everyone agreed on how to make it happen.

“When people ask me what there is to do here, I don’t know what to tell them,” she said. “I send people to Cherokee or Asheville because there’s not a lot to do here.”

Others disagreed with that assessment, saying that Maggie has an abundance of natural beauty and resources for families to enjoy whether it’s seeing the elk, driving the Blue Ridge Parkway or hiking in the national park.

“Our outdoors is the attraction,” Nielson said.

Tammy Wight, wife of Alderman Phillip Wight and co-owner of Clarketon Motel, said she wanted to continue to push the town to do something to promote the waterfall up above Maggie Valley Resort.

“Waterfalls are a huge industry. We could be included in all those waterfall guides for free,” she said.

Some years ago the town was donated about 9 acres off of Old Still Road, which includes the waterfall. A trail used to lead up the steep bank to the top of the falls, but it fell into disrepair and the town has said the cost of liability would be too high to create a public access trail and viewing platform.

Not a done deal

Maggie Valley stakeholders had another opportunity Monday night to have their voices heard and ideas incorporated into the plan. The town voted to spend an additional $2,900 to have the engineering team come back in for one more public workshop. The town already spent $25,000 last year to hire the J.M. Teague firm to gather input and put the plan together.

Alderman Phillip Wight and Alderwoman Janet Banks also attended the meeting at Guayabito’s to hear the business owners’ concerns and answer questions about the plan.

Banks told business owners that the town center master plan was simply a suggested road map that could be adjusted in the future. It’s a wish list. There is no guarantee the town will be able to fund all of the projects and no promise that the North Carolina Department of Transportation would even approve the road project.

“But we have to have an approved plan in place before we can apply for grants,” Banks said. “The plan can change.”

Sonja Michels, owner of Creekwood Village Resorts, asked if DOT had even been contacted about this project. She said she doubted DOT would allow the town to tear up a state highway, change traffic flow and lower the speed limit in the town center area.

Banks said the town partly chose to hire J.M. Teague engineering firm because of its experience working with DOT. One of the project consultants, Reuben Moore, even worked for DOT for 30 years, so he is very familiar with the DOT processes.

“DOT has been contacted several times about slowing down the traffic,” she said. “We want them to slow down to 35 miles per hour so people will stop and shop.”

While Phillip Wight said he wasn’t in favor of the plan as it was presented, he did say the engineering team had bent over backward to help the town through the process.

If attractions like an ice-skating rink would be successful, Wight said, someone in the private sector would have done it already.

“Things are improving though, but it’s slow growth,” he said. “Wheels Through Time is underappreciated, but they have created a market that has helped us keep going.”

Following the redesign workshop, Town Manager Nathan Clark said it could take a few weeks for the consultants to process all the feedback into the proposed plan. The topic could be on the agenda for the board’s regular May meeting or the board may have to call a special meeting later in the month to discuss the town center plan again.