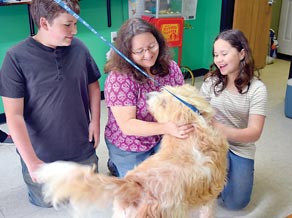 Appalachian Animal Rescue was bustling with activity Monday morning. Staff members were getting the shelter back in order following an adoption event and several families searched for a furry companion to take home.

The Walker family was waiting in the lobby for Dante — a big, shaggy dog they adopted for a family member.

“We’re getting him for my mom — she had to put her dog down two months ago and is ready for a new companion,” Angela Walker said.

The Walkers are very involved with the shelter through adopting, donating and fundraising efforts. Angela’s children, Sam and Sara Walker, help out at the shelter’s bake sale fundraisers every year. Volunteers say Sam’s homemade lemonade is the best.

“We love our animals, and it’s nice to be able to give back to the shelter for all they do for us,” Angela said.

Meanwhile, Dan and Mary Teslow played outside with Lady — a black lab mix — before deciding whether to take her home with them. With two elderly dogs and one puppy at home already, Mary said the pup needs an active playmate like Lady. The couple has adopted many animals from the shelter over the years and wouldn’t have it any other way.

“I’m an adopted person, so I think adoption is a fabulous thing to do,” Mary said.

“Too many pure breeds are bred only for looks but not personality,” Dan said. “Shelter dogs have personality and they love people.”

Todd Ortiz, director of Appalachian Animal Rescue, wishes more people realized the benefits of adopting a shelter animal. While he might be a little biased after working at the shelter for 18 years, he said shelter animals make the best pets.

“We do get some purebred animals at the shelter, but the mixed breeds tend to be healthier and they’re just so appreciative to find a home,” he said.

If more people would adopt from the shelter or make donations, Ortiz said, the shelter might be in better financial shape. It takes about $325,000 a year to keep the shelter going, but each year it gets harder to meet that goal.

Appalachian Animal Rescue, which has been around since 1962, takes in and adopts out about 600 animals a year and provides spay and neuter services for more than 1,000 animals. The no-kill shelter works closely with Macon County Animal Control to find homes for stray cats and dogs and also transports adoptable pets to other states up North.

The small shelter can hold about 85 animals at a time, and Ortiz said the shelter is always at capacity. The county’s shelter definitely helps lessen the burden, but the need is still overwhelming.

“Even with all the spay and neutering we do, it still doesn’t seem to affect how many strays we end up getting in here,” he said. “If we didn’t have animal services to help out, we would have to turn people away.”

Ortiz encourages people to help out in any way they can whether it’s adopting, volunteering, donating food and supplies or making a monetary donation to support their mission.