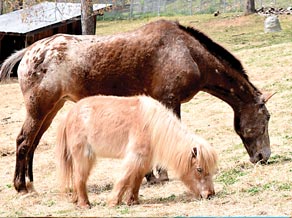 Jellybean is a 31-year-old blind miniature horse. Not being able to see her surroundings may seem like an insurmountable obstacle, but Star Ranch in Haywood County has made it possible for Jellybean to have a second chance to find a family.

Jellybean was brought to Star Ranch about two years ago when her elderly owner could no longer care for her. Karen Owens, director of Star Ranch, said Jellybean had already lost vision in one eye when she came to the horse-rescue ranch, but has been completely blind for the last year.

Fellow rescue horses Sweet Pea and Chip have adopted Jellybean and help her get around the ranch. Now the three horses are inseparable.

“Sweet Pea is a 32-year-old broodmare, and I think she just thought Jellybean was her baby and Chip has acted as her surrogate papa,” Owens said. “Sweet Pea only has one good eye and that’s all that matters.”

At first, Owens said she put a bell on Sweet Pea so Jellybean would be able to stay with her, but now she doesn’t even need the bell anymore. If Sweet Pea wanders too far from Jellybean, the little blind horse lets out a loud squeal, which alerts Sweet Pea to come back for her.

“Since she could still see when she arrived, at least she is familiar enough with her surroundings to be comfortable and happy here,” Owens said as she reached out her arm to give Jellybean a treat. “Jelly want a treat?”

Jellybean quickly replies to Owens’ question by nodding her head up and down.

Jelly and Sweet Pea’s loss of vision can most likely be attributed to uveitis. It is fairly common in older horses and researchers can’t seem to pinpoint one specific cause.

It’s just one of the many heartbreaking cases Owens sees on the ranch on a weekly basis.

Since she and her late husband Jim started Star Ranch 11 years ago, they have taken in about 100 horses to rehabilitate with the hope of readopting them out. They been able to find homes for 60 of those horses, while others weren’t fortunate enough to make it or have made the ranch more of a permanent home, like Jellybean. Unless someone wanted her as well as her adopted parents, Owens said it would be hard to find her a perfect home.

“I’m just not sure she’d do well in an entirely new setting she’s not familiar with,” Owens said about trying to find someone to adopt Jellybean. “It would have to be a very special person or situation to let her leave Sweet Pea and Chip — we just couldn’t do that to her.”

But Star Ranch does have 16 other horses and four donkeys that are in need of a good home. Owens said horses come to her ranch from all over and for many different reasons — maybe their owner can’t care for them anymore, can’t afford them, are forced to move somewhere else, or there is abuse and neglect.

In March, Star Ranch took in nine horses from The Haven in Raeford. The Haven made the news earlier this year when dozens of dead animals were reportedly found on the shelter property. Law enforcement shut down the operation and more than 600 dogs, cats, horses, pigs and birds had to be seized and relocated. Star Ranch still has four of those horses left that are available for adoption.

“We drove five hours down there and five hours back to get those horses,” Owens said. “They were so happy to be free when they got here that they just ran laps around the ranch until they were exhausted.”

Finding the next leader

Owens grew up on a farm in Ohio. She moved to Haywood County to be in the real estate business, but quickly found another cause that needed her attention. As she went to look at properties for clients, she kept seeing horses tied up or sitting lonely in a barn stall. Without a horse rescue facility west of Asheville, Owens knew she had to do something.

“No horse should have to be alone,” she said. “They don’t feel safe, they need a companion.”

While she can’t imagine doing anything else, Owens knows she won’t live forever. She wants to find someone as passionate as she is about carrying on the ranch into the future. Three people total run the ranch with the help of volunteers and no one collects a salary. The ranch has to raise about $55,000 a year to fulfill its mission and has been able to meet that goal with year-round fundraising efforts.

Owens is very thankful for the support the community has given Star Ranch and hopes that support continues.

“If people didn’t help us, I don’t know what would happen,” she said.