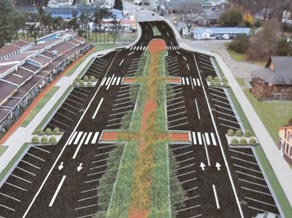 Maggie Valley leaders agreed to go back to the drawing board after several business owners expressed opposition to a portion of the proposed town center master plan.

The town center plan first presented a month ago maps out a quarter-mile area of Soco Road from the festival grounds to Evans Cove Road that would undergo major roadway modifications. While the changes would help Maggie Valley feel more like a downtown with street parking and landscaping, it would also mean area businesses would lose their private parking lots.

In order to widen the road, add a large grassy median in the middle and add reverse-angle street parking, Market Square shopping center and Cabbage Rose Gifts and Guayabito’s Mexican Restaurant would have to give up part of their property — something they’re not willing to do. Businesses are also concerned prolonged periods of roadway construction could hurt their businesses.

After hearing public feedback at two recent board meetings, the Maggie Valley Board of Alderman called a special meeting last Friday to discuss other options. Several business owners opposed to the town center plan were present for the 9 a.m. special meeting but weren’t given the opportunity for public comment even after Alderman Phillip Wight argued that people should have the chance to voice their concerns again.

“I don’t understand why we wouldn’t have public comment. This is a big issue,” he said. “We all cleared our schedules to be here today.”

Mayor Pro tem Janet Banks, who presided over the meeting in Mayor Saralyn Price’s absence, said the board already knew everyone’s concerns based on prior public input. She said the purpose of the special meeting was to schedule another design workshop to give the concerned business owners an opportunity to provide input on an alternative design.

“We’re doing all this because of public comment,” said Alderman Mike Eveland.

Town Manager Nathan Clark said the town would have to spend an additional $2,900 for the project engineering team to come back and hold another design workshop. The town has already spent $25,000 to hire engineering consultants to gather public input and put together the proposed plan.

Public workshops were held throughout the process and town residents showed support for the plan when it was first unveiled, but business owners inside the proposed town center said they weren’t aware of the planning process.

“We want to bring people back together who are super invested with the process now,” Clark said. “We want to make sure your opinions and feedback and vision is written down and included in the master plan going forward.”

While people are upset about the roadway changes, they are supportive of other aspects on the town center plan, which include a splashpad for kids, a veteran memorial park and an open-air pavilion that can convert into an ice-skating rink during the winter months.

Eveland reminded business owners that the town center master plan was just a concept that could be changed as the town moves forward in the long process of trying to secure grant funding for the separate projects.

“None of this is an absolution. An engineer might take this plan to DOT and we end up only getting a tenth of what we wanted to do,” he said. “And if you’re against doing anything — and some people are — going to this meeting won’t do any good. This is for people that want something done. We need to work toward a goal of getting something done and we need to do it together.”

The board voted unanimously to spend $2,900 for an alternative design workshop, which will be held at 6:30 p.m. Monday, May 2, at town hall.

A public input workshop to discuss alternative design plans for the Maggie Valley town center master plan will be held at 6:30 p.m. Monday, May 2, at town hall. Business owners and residents are encouraged to attend.