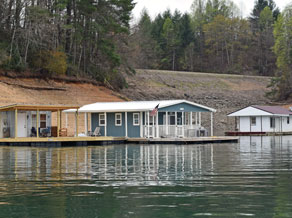 The TVA manages lakes in seven southeestern states, including Fontana Lake in Swain and Graham counties. If the TVA board of directors ends up approving the TVA staff recommendation, more than 350 houseboats would have to be removed from Fontana Lake.

Several houseboat owners and marina operators spoke against the TVA proposal at the commissioners’ meeting. Tony Sherrill, owner of Alarka Boat Dock, said removing all the houseboats would put him out of business.

“I’ve invested 38 years down there and we’ve jumped through all the hoops TVA has asked us to do over the years,” Sherrill said. “This will close me down.”

Erik Sneed of Cherokee has owned a houseboat on Fontana for three years and has invested quite a bit of money into it. He and his wife Laura Sneed have more than 2,000 signatures on a petition to present to the TVA along with many letters of opposition against the proposal.

“Our family enjoys the lake. It’s something we bought for the family and kids and we want them to be able to continue to enjoy it,” Sneed said. “The good news is there’s a lot of folks standing with us in Tennessee and other states. There are people from every state in the nation that have signed the petition.”

Graham County has already passed a resolution opposing the measure and the Tennessee General Assembly passed legislation last week opposing the TVA’s recommendation. It’s sitting on the governor’s desk waiting to be signed. A resolution was also filed with the Cherokee Tribal Council to oppose getting rid of all houseboats.

Sneed said the goal is to get the TVA to grandfather in all the existing houseboats on its lakes, which is about 1,800, and prohibit any more houseboats from being built. The next TVA board meeting is May 5 in Buchanan, Tennessee, and Sneed anticipates the houseboat issue will be on the agenda.

Commissioner David Monteith said the TVA’s proposal would have a negative impact on the local economy and on tax revenue coming to Swain County.

“About $12,000 a year is what Swain County gets in taxes from houseboats, and that doesn’t count businesses bringing in sales tax,” Monteith said. “It’s not just a little handful of people this affects, it’s our livelihoods. We can’t let this happen.”

The TVA’s attempt at removing houseboats from Fontana is a sensitive subject for a number of reasons. People don’t want to lose their investments or their businesses that support the houseboat industry, but they also don’t want to see the TVA taking another asset away from Swain County.

Monteith read off a long list of things the TVA and federal government have taken away from Swain County throughout the years. The creation of the TVA and Fontana Lake resulted in the flooding and decimation of old homesteads, schools, saw mills, gold mines and more.

While the dam was created to generate power, Monteith said Swain and Graham counties don’t get any of that power back from the TVA.

“All we get from it is a little bit of recreation,” he said. “Now they’re asking to remove all the houseboats, which would take an additional revenue source from us.”

The TVA says removing the houseboats would improve public recreation, safety and water quality on its lakes, but Monteith said Swain County has taken several measures to ensure Fontana Lake is clean and open to the public for recreational purposes. Swain and Graham counties secured more than $700,000 in grant funds about 15 years ago to purchase five pump boats that remove and properly dispose of sewage and waste from the houseboats. The water quality of Fontana has improved greatly since that measure was taken.

“They need to clean up their lakes in Tennessee — we did that here — that’s not our problem,” Monteith said. “Our houseboats are in compliance and they pay taxes.”

Monteith said he planned to attend the May 5 meeting, which is six hours away, and express the county’s opposition to the TVA’s proposal.